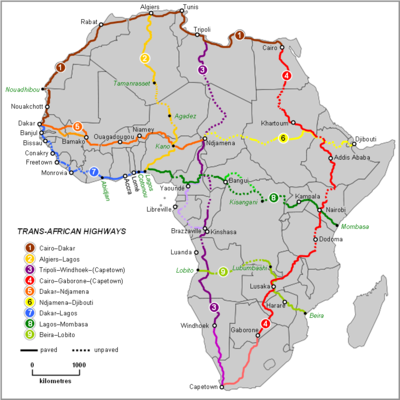 The Trans-African Highway network comprises transcontinental road projects in Africa being developed by the United Nations Economic Commission for Africa (UNECA), the African Development Bank (ADB), and the African Union in conjunction with regional international communities. They aim to promote trade and alleviate poverty in Africa through highway infrastructure development and the management of road-based trade corridors. The total length of the nine highways in the network is 56,683 km (35,221 mi).

In some documents the highways are referred to as "Trans-African Corridors" or "Road Corridors" rather than highways. The name Trans-African Highway and its variants are not in wide common usage outside of planning and development circles, and as of 2014 one does not see them signposted as such or labelled on maps, except in Kenya and Uganda where the Mombasa–Nairobi–Kampala–Fort Portal section (or the Kampala–Kigali feeder road) of Trans-African Highway 8 is sometimes referred to as the "Trans-Africa Highway".

Overall features of the network

The network as planned reaches all the continental African nations except Burundi, Eritrea, Somalia, Equatorial Guinea (Rio Muni), Lesotho, Malawi, Rwanda, South Sudan, and Swaziland. Of these, Rwanda, Malawi, Lesotho and Swaziland have paved highways connecting to the network, and the network reaches almost to the border of the others.

More than half of the network has been paved, though maintenance remains a problem. There are numerous missing links in the network where tracks are impassable after rain or hazardous due to rocks, sand, and sandstorms. In a few cases, there has never been a road of any sort, such as the 200 km gap between Salo in the Central African Republic and Ouésso in the Republic of the Congo on highway 3. The missing links arise mainly because the section does not have a high national priority as opposed to a regional or transcontinental priority.[citation needed]

While North Africa and West Africa are linked across the Sahara, the main deficiency of the network is that there are no paved highways across Central Africa. Not only does this prevent road trade between East and West Africa, or between West and Southern Africa, but it restricts trade within Central Africa. Although there may be paved links from West, East, or Southern Africa to the fringes of Central Africa, those links do not penetrate very far into the region. The terrain, rainforest, and climate of Central Africa, particularly in the catchments of the lower and middle Congo River and the Ubangui, Sangha, and Sanaga Rivers, present formidable obstacles to highway engineers, and paved roads there have short lifespans. Further north in Cameroon and Chad, hilly terrain or plains prone to flooding have restricted the development of local paved road networks.

Through this forbidding environment, three Trans-African Highways are planned to cross in the east-west direction (highways 6, 8, and 9) while one will cross north to south (highway 3). As of 2014, all have substantial missing links in Central Africa.

Background and need for trans-African highways

Africa has a relatively poor history of international cooperation in road-building. Colonial powers and, later, competing superpowers and regional powers, generally did not encourage road links between their respective spheres except where absolutely necessary, and in newly independent African states, border restrictions were often tightened rather than relaxed as a way of protecting internal trade, as a weapon in border disputes, and to increase the opportunities for official corruption.

Poverty affects development of international highways when scarce financial resources have to be directed towards internal rather than external priorities.

The agencies developing the highway network are influenced by the idea that road infrastructure stimulates trade and so alleviates poverty, as well as benefitting health and education since they allow medical and educational services to be distributed to previously inaccessible areas.

As well as preventing progress in road construction, wars and conflicts have led to the destruction of roads and river crossings, have prevented maintenance and have often closed vital links. Sierra Leone, Liberia, the Democratic Republic of the Congo and Angola are all in rebuilding phases after war. Wars in the DR Congo set back road infrastructure in that country by decades and cut the principal route between East and West Africa. In recent years, security considerations have restricted road travel in the southern parts of Morocco, Algeria, Libya and Egypt as well as in northern Chad and much of Sudan.

Trans-African highways can only develop in times of peace and stability, and in 2007 the future looks brighter, with the southern Sudan conflict being the only one currently affecting development of the network (highway 6). Lawlessness rather than war hampers progress in developing highway 3 between Libya and Chad, and though economic instability could affect maintenance of paved highways 4 and 9 though Zimbabwe, there are practical alternatives through neighbouring countries. Conflicts in Somalia do not affect the network as that is the largest African country with no trans-African highways, but they will affect the development of feeder roads to the network.

Using existing national highways as much as possible, the aim of the development agencies is to identify priorities in relation to trade, to plan the highways, and to seek finance for the construction of missing links and bridges, the paving of sections of earth and gravel roads, and the rehabilitation of deteriorated paved sections.

The need to reduce delays caused by highway checkpoints and border controls or to ease travel restrictions has also been identified, but so far solutions have not been forthcoming. Rather than just having international highways over which each country maintains its regulations and practices, there is a need for transnational highways over which regulations and practices are simplified, unified and implemented without causing delays to goods and travellers.

Description of the highways in the network

Starting with the most northerly, the east-west routes are:

Starting with the most westerly, these are:

As noted above, TAH 1 and TAH 7 join to form an additional north-south route around the western extremity of the continent between Monrovia and Rabat.

Regional international communities are heavily involved in trans-African highway development and work in conjunction with the ADB and UNECA. For example: