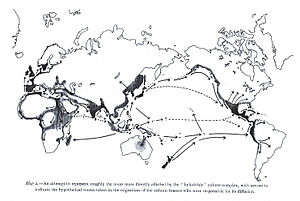 In cultural anthropology and cultural geography, cultural diffusion, as conceptualized by Leo Frobenius in his 1897/98 publication Der westafrikanische Kulturkreis, is the spread of cultural items—such as ideas, styles, religions, technologies, languages etc.—between individuals, whether within a single culture or from one culture to another. It is distinct from the diffusion of innovations within a specific culture.

Diffusion across cultures is a well-attested and also uncontroversial phenomenon. Cultural diffusion was an important role for different Native American tribes. For example, the practice of agriculture is widely believed to have diffused from somewhere in the Middle East to all of Eurasia, less than 10,000 years ago, having been adopted by many pre-existing cultures. Other established examples of diffusion include the spread of the war chariot and iron smelting in ancient times, and the use of automobiles and Western business suits in the 20th century.

Five major types of cultural diffusion have been defined:

Inter-cultural diffusion can happen in many ways. Migrating populations will carry their culture with them. Ideas can be carried by trans-cultural visitors, such as merchants, explorers, soldiers, diplomats, slaves, and hired artisans. Technology diffusion has often occurred by one society luring skilled scientists or workers by payments or other inducement. Trans-cultural marriages between two neighboring or interspersed cultures have also contributed. Among literate societies, diffusion can occur through letters, books, and, in modern times, through electronic media.

There are three categories of diffusion mechanisms:

Direct diffusion was common in ancient times, when small groups of humans lived in adjoining settlements. Indirect diffusion is common in today's world because of the mass media and invention of the Internet. Also of interest is the work of American historian and critic Daniel J. Boorstin in his book The Discoverers, in which he provides an historical perspective on the role of explorers in the diffusion of innovations between civilizations.

The many models that have been proposed for inter-cultural diffusion are:

A concept that has often been mentioned in this regard, which may be framed in the evolutionary diffusionism model, is that of "an idea whose time has come" — whereby a new cultural item appears almost simultaneously and independently in several widely separated places, after certain prerequisite items have diffused across the respective communities. This concept was invoked with regard to the independent development of calculus by Newton and Leibnitz, and the inventions of the airplane and of the electronic computer.

Hyperdiffusionists deny that parallel evolution or independent invention took place to any great extent throughout history; they claim that all major inventions and all cultures can be traced back to a single culture.[3]

Early theories of hyperdiffusionism can be traced to ideas about South America being the origin of mankind. Antonio de León Pinelo, a Spaniard who settled in Bolivia, claimed in his book Paraíso en el Nuevo Mundo that the Garden of Eden and the creation of man had occurred in present-day Bolivia and that the rest of the world was populated by migrations from there. Similar ideas were also held by Emeterio Villamil de Rada; in his book La Lengua de Adán he attempted to prove that Aymara was the original language of mankind and that humanity had originated in Sorata in the Bolivian Andes. The first scientific defence of humanity originating in South America came from the Argentine paleontologist Florentino Ameghino in 1880, who published his research in La antigüedad del hombre en el Plata.[4]

The work of Grafton Elliot Smith fomented a revival of hyperdiffusionism in 1911; he asserted that copper–producing knowledge spread from Egypt to the rest of the world along with megalithic culture.[5] Smith claimed that all major inventions had been made by the ancient Egyptians and were carried to the rest of the world by migrants and voyagers. His views became known as "Egyptocentric-Hyperdiffusionism".[6] William James Perry elaborated on Smith's hypothesis by using ethnographic data. Another hyperdiffusionist was Lord Raglan; in his book How Came Civilization (1939) he wrote that instead of Egypt all culture and civilization had come from Mesopotamia.[7] Hyperdiffusionism after this did not entirely disappear, but it was generally abandoned by mainstream academia.

Diffusion theory has been advanced[according to whom?] as an explanation for the "European miracle", the adoption of technological innovation in medieval Europe which by the 17th century culminated in European technological achievement surpassing the Islamic world and China.[8] Such technological import to medieval Europe include gunpowder, clock mechanisms, shipbuilding, paper and the windmill, however, in each of these cases Europeans not only adopted the technologies, but improved the manufacturing scale, inherent technology, and applications to a point clearly surpassing the evolution of the original invention in its country of origin.

Historians[who?] have questioned recently[year needed] whether Europe really owes the development of such inventions as gunpowder, the compass, the windmill or printing to the Chinese or other cultures.[9][10][11]

While the concept of diffusion is well accepted in general, conjectures about the existence or the extent of diffusion in some specific contexts have been hotly disputed. An example of such disputes is the proposal by Thor Heyerdahl that similarities between the culture of Polynesia and the pre-Columbian civilizations of the Andes are due to diffusion from the latter to the former—a theory that currently has few supporters among professional anthropologists. Heyerdahl's theory of Polynesian origins has not gained acceptance among anthropologists.[12][13][14][15][16]

Attempts to explain similarities between two cultures by diffusion are often criticized for being ethnocentric, since they imply that the supposed "receptors" would not be capable of innovation. Some authors made such claims explicitly—for example, to argue for pre-Columbian trans-oceanic contact as the "only possible explanation" for the origin of the great civilizations in the Andes and of Central America.

Those disputes are fueled in part by the overuse of cultural diffusion, starting in the late 19th century, as a blanket explanation for all similarities between widely dispersed cultures. The most famous proponent of this theory was Grafton Elliot Smith, who argued that civilization first formed in Ancient Egypt and then diffused to other places.

Diffusion theories also suffer from being inherently speculative and hard to prove or disprove; especially for relatively simple cultural items like "pyramid-shaped buildings", "solar deity", "row of standing stones", or "animal paintings in caves". After all, the act of diffusion proper is a purely mental (or at most verbal) phenomenon, that leaves no archaeological trace, so diffusion can be deduced with some certainty only when the similarities involve a relatively complex and partly arbitrary collection of items, such as a writing system, a complex myth, or a pantheon of gods.

Another criticism that has been leveled at many diffusion proposals is the failure to explain why certain items were not diffused. For example, attempts to "explain" the New World civilizations by diffusion from Europe or Egypt should explain why a basic concept like the potter's wheel is not found in the Americas while writing is.

Major contributors to inter-cultural diffusion research and theory include: