Pi (π) is the best-known transcendental number

The name "transcendental" comes from Leibniz in his 1682 paper where he proved that sin(x) is not an algebraic function of x.[1][2] Euler was probably the first person to define transcendental numbers in the modern sense.[3]

Johann Heinrich Lambert conjectured that e and π were both transcendental numbers in his 1761 paper proving the number π is irrational.

Joseph Liouville first proved the existence of transcendental numbers in 1844,[4] and in 1851 gave the first decimal examples such as the Liouville constant

in which the nth digit after the decimal point is 1 if n is equal to k! (k factorial) for some k and 0 otherwise.[5] In other words, the nth digit of this number is 1 only if n is one of the numbers 1! = 1, 2! = 2, 3! = 6, 4! = 24, etc. Liouville showed that this number is what we now call a Liouville number; this essentially means that it can be more closely approximated by rational numbers than can any irrational algebraic number. Liouville showed that all Liouville numbers are transcendental.[6]

The first number to be proven transcendental without having been specifically constructed for the purpose was e, by Charles Hermite in 1873.

In 1882, Ferdinand von Lindemann published a proof that the number π is transcendental. He first showed that ea is transcendental when a is algebraic and not zero. Then, since eiπ = −1 is algebraic (see Euler's identity), iπ and therefore π must be transcendental. This approach was generalized by Karl Weierstrass to the Lindemann–Weierstrass theorem. The transcendence of π allowed the proof of the impossibility of several ancient geometric constructions involving compass and straightedge, including the most famous one, squaring the circle.

In 1900, David Hilbert posed an influential question about transcendental numbers, Hilbert's seventh problem: If a is an algebraic number, that is not zero or one, and b is an irrational algebraic number, is ab necessarily transcendental? The affirmative answer was provided in 1934 by the Gelfond–Schneider theorem. This work was extended by Alan Baker in the 1960s in his work on lower bounds for linear forms in any number of logarithms (of algebraic numbers).[10]

The non-computable numbers are a strict subset of the transcendental numbers.

Numbers proven to be transcendental

Numbers proven to be transcendental:

the Gelfond–Schneider constant (or Hilbert number). 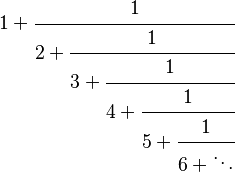 more generally, any number of the form

more generally any number of the form

is the floor function.

Numbers which have yet to be proven to be either transcendental or algebraic:

Sketch of a proof that e is transcendental

The first proof that the base of the natural logarithms, e, is transcendental dates from 1873. We will now follow the strategy of David Hilbert (1862–1943) who gave a simplification of the original proof of Charles Hermite. The idea is the following:

Assume, for purpose of finding a contradiction, that e is algebraic. Then there exists a finite set of integer coefficients c0, c1, ..., cn satisfying the equation:

Now for a positive integer k, we define the following polynomial:

and multiply both sides of the above equation by

to arrive at the equation:

This equation can be written in the form

Lemma 1. For an appropriate choice of k,

is a non-zero integer.

Proof. Each term in P is an integer times a sum of factorials, which results from the relation

which is valid for any positive integer j (consider the Gamma function).

It is non-zero because for every a satisfying 0< a ≤ n, the integrand in

is e−x times a sum of terms whose lowest power of x is k+1 after substituting x for x - a in the integral. Then this becomes a sum of integrals of the form

By choosing k so that k+1 is prime and larger than n and |c0|, we get that

on the interval [0,n] we can infer that

which is sufficient to finish the proof of this lemma.

Noting that one can choose k so that both Lemmas hold we get the contradiction we needed to prove the transcendence of e.

A similar strategy, different from Lindemann's original approach, can be used to show that the number π is transcendental. Besides the gamma-function and some estimates as in the proof for e, facts about symmetric polynomials play a vital role in the proof.

For detailed information concerning the proofs of the transcendence of π and e see the references and external links.

Kurt Mahler in 1932 partitioned the transcendental numbers into 3 classes, called S, T, and U.[26] Definition of these classes draws on an extension of the idea of a Liouville number (cited above).

Measure of irrationality of a real number

One way to define a Liouville number is to consider how small a given real number x makes linear polynomials |qx − p| without making them exactly 0. Here p, q are integers with |p|, |q| bounded by a positive integer H.

Measure of transcendence of a complex number

Next consider the values of polynomials at a complex number x, when these polynomials have integer coefficients, degree at most n, and height at most H, with n, H being positive integers.

Let m(x,n,H) be the minimum non-zero absolute value such polynomials take at x and take:

Suppose this is infinite for some minimum positive integer n. A complex number x in this case is called a U number of degree n.

Now we can define

T numbers also comprise a set of measure 0.[30] It took about 35 years to show their existence. Wolfgang M. Schmidt in 1968 showed that examples exist. However, almost all complex numbers are S numbers.[31] Mahler proved that the exponential function sends all non-zero algebraic numbers to S numbers:[32][33] this shows that e is an S number and gives a proof of the transcendence of π. The most that is known about π is that it is not a U number. Many other transcendental numbers remain unclassified.

Two numbers x, y are called algebraically dependent if there is a non-zero polynomial P in 2 indeterminates with integer coefficients such that P(x, y) = 0. There is a powerful theorem that 2 complex numbers that are algebraically dependent belong to the same Mahler class.[28][34] This allows construction of new transcendental numbers, such as the sum of a Liouville number with e or π.

It is often speculated that S stood for the name of Mahler's teacher Carl Ludwig Siegel and that T and U are just the next two letters.

Jurjen Koksma in 1939 proposed another classification based on approximation by algebraic numbers.[26][35]

Consider the approximation of a complex number x by algebraic numbers of degree ≤ n and height ≤ H. Let α be an algebraic number of this finite set such that |x − α| has the minimum positive value. Define ω*(x,H,n) and ω*(x,n) by:

If for a smallest positive integer n, ω*(x,n) is infinite, x is called a U*-number of degree n.

If the ω*(x,n) are all finite but unbounded, x is called a T*-number,

Koksma's and Mahler's classifications are equivalent in that they divide the transcendental numbers into the same classes.[35] The A*-numbers are the algebraic numbers.[31]

It can be shown that the nth root of λ (a Liouville number) is a U-number of degree n.[36]