From Infogalactic: the planetary knowledge core
Jump to: navigation, search
For the periodical, see The Transept. 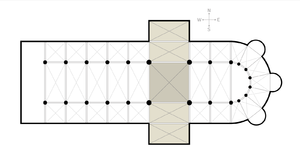 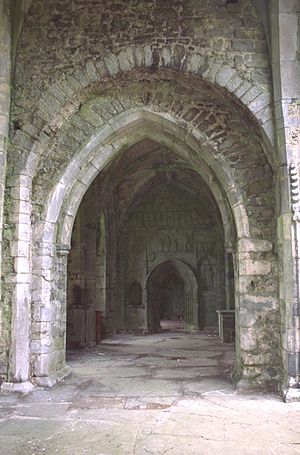 A transept (with two semitransepts) is a transverse section, of any building, which lies across the main body of the building.[1] In churches, a transept is an area set crosswise to the nave in a cruciform ("cross-shaped") building in Romanesque and Gothic Christian church architecture. Each half of a transept is known as a semitransept.[1]

The transept of a church separates the nave from the sanctuary, apse, choir, chevet, presbytery or chancel. The transepts cross the nave at the crossing, which belongs equally to the main nave axis and to the transept. Upon its four piers, the crossing may support a spire (e.g., Salisbury Cathedral), a central tower (e.g., Gloucester Cathedral) or a crossing dome (e.g., St Paul's Cathedral). Since the altar is usually located at the east end of a church, a transept extends to the north and south. The north and south end walls often hold decorated windows of stained glass, such as rose windows, in stone tracery.

Occasionally, the basilicas and the church and cathedral planning that descended from them were built without transepts; sometimes the transepts were reduced to matched chapels. More often, the transepts extended well beyond the sides of the rest of the building, forming the shape of a cross. This design is called a "Latin cross" ground plan, and these extensions are known as the arms of the transept.[1] A "Greek cross" ground plan, with all four extensions the same length, produces a central-plan structure.

When churches have only one transept, as at Pershore Abbey, there is generally a historical disaster, fire, war or funding problem, to explain the anomaly. At Beauvais only the chevet and transepts stand; the nave of the cathedral was never completed after a collapse of the daring high vaulting in 1284. At St. Vitus Cathedral, Prague, only the choir and part of a southern transept were completed until a renewed building campaign in the 19th century.

Other senses of the word

The word "transept" is occasionally extended to mean any subsidiary corridor crossing a larger main corridor, such as the cross-halls or "transepts" of The Crystal Palace, London, of glass and iron that was built for the Great Exhibition of 1851.