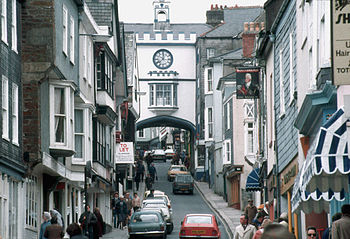 A Transition town, or more generally a transition initiative, is a grassroot community project that seeks to build resilience in response to peak oil,[1] climate destruction, and economic instability by creating local groups that uphold the values of the transition network.[citation needed] Local projects are usually based on the model's initial '12 ingredients' and later 'revised ingredients'.[2][3] The first initiative to use the name was Transition Town Totnes, founded in 2006. The socioeconomic movement is an example of fiscal localism.[4][5] Since then, many Transition groups have started around the United Kingdom (UK) and, in recent years, the world.[citation needed]

The term, "Transition town" was coined by Louise Rooney[6] and Catherine Dunne.

The Transition model can be applied to different types of place where people live, such as villages, regions, islands and towns. The generic term is "Transition initiative", which includes Transition neighborhoods, communities, and cities, although "Transition town" is in common usage.[2]

From Kinsale to Totnes

In 2004, permaculture designer Rob Hopkins set his students at Kinsale Further Education College the task of applying permaculture principles to the concept of peak oil. The output of this student project was the ‘Kinsale Energy Descent Action Plan'.[7]

This looked at across-the-board creative adaptations in the realms of energy production, health, education, economy and agriculture as a "road map" to a sustainable future for the town. Two of his students, Louise Rooney and Catherine Dunne, developed the Transition towns concept. They then presented their ideas to Kinsale Town Council. The councilors decided to adopt the plan and work towards energy independence.[citation needed]

Hopkins moved to his hometown of Totnes, England, where he and Naresh Giangrande developed these concepts into the transition model. In 2006 Transition Town Totnes become the first Transition initiative.[8]

Between late 2006 and early 2007 the Transition Network was founded as a UK charity by British permaculture educator Rob Hopkins. It trains and supports people involved with Transition initiatives. It disseminates the concepts of Transition towns.[9]

In 2008 the number of communities involved in the project had increased with many localities in the process of becoming "official" Transition towns.[10]

The initiative spread and by May 2010 there were over 400 community initiatives recognized as official Transition towns in the United Kingdom, Ireland, Canada, Australia, New Zealand, the United States, Italy and Chile. The term transition initiatives become common to reflect the range and type of communities involved - e.g. villages (Kinsale), neighbourhoods of cities (Portobello, Edinburgh), through council districts (Penwith) to cities and city boroughs (Brixton).[11][12]

Influences include permaculture concepts as described in Bill Mollison’s Permaculture, a Designers Manual (1988) and David Holmgren’s Permaculture: Principles and Pathways Beyond Sustainability (2003),[14] as well as David Fleming's work on community, culture and resilience.[15]

Each Transition town or initiative has a high level of autonomy. However, to be called an official initiative certain criteria must be met. Additionally, there is nothing to stop an 'unofficial' initiative using ideas inspired by Transition towns. Further, there are various 'hubs' to co-ordinate work at a regional level.[citation needed]

The Transition Network is a UK charity founded between late 2006 and early 2007. It was set up to disseminate the concept of the Transition towns. It has published books and films, trained people and facilitated networking.[9] The network's website contains a listing of the initiatives that have registered there.[16]

Some of the material has been translated and adapted to other languages/cultures, including Portuguese, Danish, German, Dutch, Spanish, French, Hungarian, Italian, Japanese and Irish.[17]

In the United States, Transition initiatives have been started in many communities. Transition US is the national hub. Its stated vision "that every community in the United States will have engaged its collective creativity to unleash an extraordinary and historic transition to a future beyond fossil fuels; a future that is more vibrant, abundant and resilient; one that is ultimately preferable to the present".[18]

Transition US is a resource and catalyst for building resilient communities across the United States that are able to withstand severe energy, climate or economic shocks while creating a better quality of life in the process. They are accomplishing this mission by inspiring, encouraging, supporting, networking and training individuals and their communities as they consider, adopt, adapt, and implement the transition approach to community empowerment and change.[19]

A large number of state sites have also been set up using the Ning social networking platform. These state sites, under the umbrella of a national Ning site,[20] were set up to help facilitate, network, inform, monitor, and house regional and organizational Transition initiatives. Thus, furthering the spread of the Transition Movement while networking related organizations, projects, ideas and activities. In addition, many Transition initiatives can be found on the WiserEarth community.[21]

The main aim of the international project, echoed by local initiatives, is to raise awareness of sustainable living and build local ecological resilience in the near future.

The Transition Handbook: From Oil Dependency to Local Resiliency by Rob Hopkins provides much of the framework behind the Transition Initiative and outlines ways for local Transition Towns to get involved.[22]

Communities are encouraged to seek out methods for reducing energy usage as well as reducing their reliance on long supply chains that are totally dependent on fossil fuels for essential items (see environmental calculator).

Food is a key area for transition, sometimes the slogan "Food feet, not food miles" is used. Initiatives so far have included creating community gardens or replacing ornamental tree plantings with fruit or nut trees, to grow food.

Business waste exchange is considered. This seeks to match the waste of one industry with another industry that uses that waste material, sometimes referred to as industrial symbiosis. Repairing old items rather than throwing them away is looked at.

Central to the transition town movement is the idea that a life without oil could in fact be far more enjoyable and fulfilling than the present: "by shifting our mind-set we can actually recognise the coming post-cheap oil era as an opportunity rather than a threat, and design the future low carbon age to be thriving, resilient and abundant — somewhere much better to live than our current alienated consumer culture based on greed, war and the myth of perpetual growth."[23][24]

An essential aspect of transition in many places, is that the outer work of transition needs to be matched by inner transition. That is in order to move down the energy descent pathways effectively we need to rebuild our relations with our selves, with each other and with the "natural world". That requires focusing on the heart and soul of transition.[25][26]

An important aim for Transition towns is to reduce dependency on fossil fuels. One way to further this goal is for the community to develop an EDAP. The term "community" in this context includes local people, local institutions, local agencies and the local council.[citation needed] The first comprehensive plan was created for Totnes in 2010, entitled Transition in Action: Totnes & District 2030.[27]

In France, where the movement is called Villes et Territoires en Transition, the association négaWatt provides a theoretical support to the transition movement.[28]

As of 2010, transition initiatives generally include the global financial crisis as further threat to local communities, alongside peak oil and climate change. They promote local complementary currencies as a way creating sustainable economies.[citation needed]

Local currencies existing or under development include:

While the focus and aims remain the same, the methods used to achieve these vary. For example, Totnes has introduced its own local currency, the Totnes pound, which is redeemable in local shops and businesses, helping to reduce "food miles" while also supporting local firms.[29] This idea is also planned[who?] to be introduced in three Welsh transition towns[30] and in Maleny Australia, the Baroon Dollar as a part of a regional transition towns project.[31]

Transition towns has featured in the plot line of the long-running BBC Radio 4 series The Archers. This is an example of mainstream media attention the movement got after a couple of years of being founded.[32]

A number of have been published on specific topics, including: how communities can develop their Transition town initiative. Unless stated, the following books were published as a collaboration between Green Books and the Transition Network (under the label Transition Books):[33]

In 2008, the Transition Handbook was the joint 5th most popular book taken on holiday during the summer recess by the UK parliamentary MPs.[36]

Two films have been created by the movement about the movement. They document the progress of various initiatives: