Transmutation of species or Transformism are terms often used to describe 19th-century evolutionary ideas for the altering of one species into another that preceded Charles Darwin's theory of natural selection.[1] The French Transformisme was a term used by Jean Baptiste Lamarck in 1809 for his theory, and other 19th century proponents of pre-Darwinian evolutionary ideas included Étienne Geoffroy Saint-Hilaire, Robert Grant, and Robert Chambers who anonymously published the book Vestiges of the Natural History of Creation. Opposition in the scientific community to these early theories of evolution, led by influential scientists like the anatomists Georges Cuvier and Richard Owen and the geologist Charles Lyell, was intense. The debate over them was an important stage in the history of evolutionary thought and would influence the subsequent reaction to Darwin's theory.

Transmutation was one of the names commonly used for evolutionary ideas in the 19th century before Charles Darwin published On The Origin of Species (1859). Transmutation had previously been used as a term in alchemy to describe the transformation of base metals into gold. Other names for evolutionary ideas used in this period include the development hypothesis (one of the terms used by Darwin) and the theory of regular gradation, used by William Chilton in the periodical press such as The Oracle of Reason.[2] Transformation is another word used quite as often as transmutation in this context. These early 19th century evolutionary ideas played an important role in the history of evolutionary thought.

The proto-evolutionary thinkers of the 18th and early 19th century had to invent terms to label their ideas, but it was first Joseph Gottlieb Kölreuter who used the term "transmutation" to refer to species who have had biological changes through hybridization.[3]

The terminology did not settle down until some time after the publication of the Origin of Species. The word evolution was quite a late-comer: it can be seen in Herbert Spencer's Social Statics of 1851,[4] and there is at least one earlier example, but it was not in general use until about 1865-70. 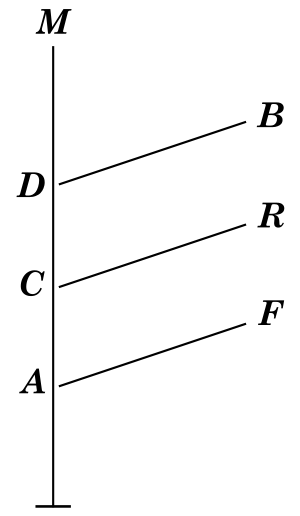 Diagram from the 1844 book Vestiges of the Natural History of Creation by Robert Chambers shows a model of development where fish (F), reptiles (R), and birds (B) represent branches from a path leading to mammals (M).

Jean-Baptiste Lamarck proposed a theory on the transmutation of species in Philosophie Zoologique (1809). Lamarck did not believe that all living things shared a common ancestor. Rather he believed that simple forms of life were created continuously by spontaneous generation. He also believed that an innate life force, which he sometimes described as a nervous fluid, drove species to become more complex over time, advancing up a linear ladder of complexity that was related to the great chain of being. Lamarck also recognized that species were adapted to their environment. He explained this observation by saying that the same nervous fluid driving increasing complexity, also caused the organs of an animal (or a plant) to change based on the use or disuse of that organ, just as muscles are affected by exercise. He argued that these changes would be inherited by the next generation and produce slow adaptation to the environment. It was this secondary mechanism of adaptation through the inheritance of acquired characteristics that became closely associated with his name and would influence discussions of evolution into the 20th century.[5][6]

A radical British school of comparative anatomy that included the surgeon Robert Knox and the anatomist Robert Grant was closely in touch with Lamarck's school of French Transformationism, which contained scientists such as Étienne Geoffroy Saint-Hilaire. Grant developed Lamarck's and Erasmus Darwin's ideas of transmutation and evolutionism, investigating homology to prove common descent. As a young student Charles Darwin joined Grant in investigations of the life cycle of marine animals. He also studied geology under professor Robert Jameson whose journal published an anonymous paper in 1826 praising "Mr. Lamarck" for explaining how the higher animals had "evolved" from the "simplest worms" – this was the first use of the word "evolved" in a modern sense. Jameson's course closed with lectures on the "Origin of the Species of Animals".[7][8]

The computing pioneer Charles Babbage published his unofficial Ninth Bridgewater Treatise in 1837, putting forward the thesis that God had the omnipotence and foresight to create as a divine legislator, making laws (or programs) which then produced species at the appropriate times, rather than continually interfering with ad hoc miracles each time a new species was required. In 1844 the Scottish publisher Robert Chambers anonymously published an influential and extremely controversial book of popular science entitled Vestiges of the Natural History of Creation. This book proposed an evolutionary scenario for the origins of the solar system and life on earth. It claimed that the fossil record showed a progressive ascent of animals with current animals being branches off a main line that leads progressively to humanity. It implied that the transmutations lead to the unfolding of a preordained plan that had been woven into the laws that governed the universe. In this sense it was less completely materialistic than the ideas of radicals like Robert Grant, but its implication that humans were just the last step in the ascent of animal life incensed many conservative thinkers. Both conservatives like Adam Sedgwick, and radical materialists like Thomas Henry Huxley, who disliked Chambers' implications of preordained progress, were able to find scientific inaccuracies in the book that they could disparage. Darwin himself openly deplored the author's "poverty of intellect", and dismissed it as a "literary curiosity." However, the high profile of the public debate over Vestiges, with its depiction of evolution as a progressive process, and its popular success, would greatly influence the perception of Darwin's theory a decade later.[9][10][11] It also influenced some younger naturalists, including Alfred Russel Wallace, to take an interest in the idea of transmutation.[12]

Ideas about the transmutation of species were strongly associated with the radical materialism of the enlightenment and were greeted with hostility by more conservative thinkers. Cuvier attacked the ideas of Lamarck and Geoffroy Saint-Hilaire, agreeing with Aristotle that species were immutable. Cuvier believed that the individual parts of an animal were too closely correlated with one another to allow for one part of the anatomy to change in isolation from the others, and argued that the fossil record showed patterns of catastrophic extinctions followed by re-population, rather than gradual change over time. He also noted that drawings of animals and animal mummies from Egypt, which were thousands of years old, showed no signs of change when compared with modern animals. The strength of Cuvier's arguments and his reputation as a leading scientist helped keep transmutational ideas out of the scientific mainstream for decades.[13]

In Britain, where the philosophy of natural theology remained influential, William Paley wrote the book Natural Theology with its famous watchmaker analogy, at least in part as a response to the transmutational ideas of Erasmus Darwin.[14] Geologists influenced by natural theology, such as Buckland and Sedgwick, made a regular practice of attacking the evolutionary ideas of Lamarck and Grant, and Sedgwick wrote a famously harsh review of The Vestiges of the Natural History of Creation.[15][16] Although the geologist Charles Lyell opposed scriptural geology he also believed in the immutability of species, and in his Principles of Geology (1830–1833), criticized and dismissed Lamarck's theories of development. Instead, he advocated a form of progressive creation, in which each species had its "centre of creation" and was designed for this particular habitat, but would go extinct when this habitat changed.[8]

This 1847 diagram by Richard Owen shows his conceptual archetype for all vertebrates.

Another source of opposition to transmutation was a school of naturalists who were influenced by the German philosophers and naturalists associated with idealism, such as Goethe, Hegel and Lorenz Oken. Idealists such as Louis Agassiz and Richard Owen believed that each species was fixed and unchangeable because it represented an idea in the mind of the creator. They believed that relationships between species could be discerned from developmental patterns in embryology, as well as in the fossil record: but that these relationships represented an underlying pattern of divine thought, with progressive creation leading to increasing complexity and culminating in humanity. Owen developed the idea of "archetypes" in the Divine mind that would produce a sequence of species related by anatomical homologies, such as vertebrate limbs. Owen was concerned by the political implications of the ideas of transmutationists like Robert Grant, and he led a public campaign by conservatives that successfully marginalized Grant in the scientific community. In his famous 1841 paper, which coined the term dinosaur for the giant reptiles discovered by Buckland and Gideon Mantell, Owen argued that these reptiles contradicted the transmutational ideas of Lamarck because they were more sophisticated than the reptiles of the modern world. Darwin would make good use of the homologies analyzed by Owen in his own theory, but the harsh treatment of Grant, along with the controversy surrounding Vestiges, would be factors in his decision to ensure that his theory was fully supported by facts and arguments before publishing his ideas.[8][17][18]