From Infogalactic: the planetary knowledge core
Jump to: navigation, search
Not to be confused with Transport in London. 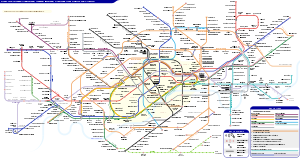 Transport for London (TfL) is a local government body responsible for most aspects of the transport system in Greater London in England, formerly named "London Transport" (LT). Its role is to implement the transport strategy and to manage transport services across London.[1] Its head office is in Windsor House in the City of Westminster.[1]

TfL was created in 2000 as part of the Greater London Authority by the Greater London Authority Act 1999.[2] It gained most of its functions from its predecessor London Regional Transport in 2000. The first Commissioner of TfL was Bob Kiley. The first Chair was then-Mayor of London Ken Livingstone, and the first Deputy Chair was Dave Wetzel. Livingstone and Wetzel remained in office until the election of Boris Johnson as Mayor in 2008. Johnson took over as Chairman, and in February 2009 fellow-Conservative Daniel Moylan was appointed as his Deputy.

TfL did not take over responsibility for the London Underground until 2003, after the controversial Public-private partnership (PPP) contract for maintenance had been agreed. Management of the Public Carriage Office had previously been a function of the Metropolitan Police.

Transport for London Group Archives holds business records for TfL and its predecessor bodies and transport companies. Some early records are also held on behalf of TfL Group Archives at the London Metropolitan Archives.

On 1 June 2008, the drinking of alcoholic beverages was banned on Tube and London Overground trains, buses, trams, Docklands Light Railway and all stations operated by TfL across London but not those operated by other rail companies.[6][7] Carrying open containers of alcohol was also banned on public transport operated by TfL. The Mayor of London and TfL announced the ban with the intention of providing a safer and more pleasant experience for passengers. There were "Last Round on the Underground" parties on the night before the ban came into force. Passengers refusing to observe the ban may be refused travel and asked to leave the premises. The Greater London Authority reported in 2011 that assaults on London Underground staff had fallen by 15% since the introduction of the ban.[8]

TfL commissioned a survey in 2013 which showed that 15% of women using public transport in London had been the subject of some form of unwanted sexual behaviour but that 90% of incidents were not reported to the police. In an effort to reduce sexual offences and increase reporting, TfL—in conjunction with the British Transport Police, Metropolitan Police Service, and City of London Police—launched Project Guardian.[9]

In 2014, Transport for London launched the 100 years of women in transport campaign in partnership with the Department for Transport, Crossrail,[10] Network Rail,[11] Women's Engineering Society[12] and the Women's Transportation Seminar (WTS). The programme is a celebration of the significant role that women have played in transport over the past 100 years, following the centennial anniversary of the First World War, when 100,000 women entered the Transport industry to take on the responsibilities held by men who enlisted for military service.[13]

TfL is controlled by a board whose members are appointed by the Mayor of London,[14] a position held by Boris Johnson who also chairs the Board. The Commissioner of Transport for London reports to the Board and leads a management team with individual functional responsibilities.

TfL owns and operates the London Transport Museum in Covent Garden, a museum that conserves and explains London's transport heritage. The museum also has an extensive depot, situated at Acton, that contains material impossible to display at the central London museum, including many additional road vehicles, trains, collections of signs and advertising materials. The depot has several open weekends each year. There are also occasional heritage train runs on the Metropolitan line.

TfL has developed an electronic "Journey Planner",[16] which enables users to plan journeys by all forms of public transport and bicycle in and around London. 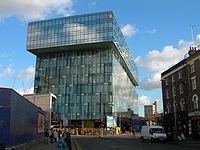 STTOC played an important part in the security and smooth running of the 2012 Summer Olympics.[19] The London Underground Network Operations Centre is now located on the fifth floor of Palestra and not within STTOC.[20][21] The centre featured in the 2013 BBC Two documentary series The Route Masters: Running London's Roads.

Transport for London introduced the "Connect" project for radio communications during the 2000s, to improve radio connections for London Underground staff and the emergency services.[22][23] The system replaced various separate radio systems for each tube line, and was funded under a private finance initiative.The supply contract was signed in November 1999 with Motorola as the radio provider alongside Thales. Citylink's shareholders are Thales Group (33 per cent), Fluor Corporation (18%), Motorola (10%), Laing Investment (19.5%) and HSBC (19.5%). The cost of the design, build and maintain contract was £2 billion over twenty years.
Various subcontractors were used for the installation work, including Brookvex and Fentons.

A key reasoning for the introduction of the system was in light of the King's Cross fire disaster, where efforts by the emergency services were hampered by a lack of radio coverage below ground. Work was due to be completed by the end of 2002, although suffered delays due to the necessity of installing the required equipment on an ageing railway infrastructure with no disruption to the operational railway. On 5 June 2006 the London Assembly published the 7 July Review Committee report, which urged TfL to speed up implementation of the Connect system.[22]

The East London line was chosen as the first line to receive the TETRA radio in February 2006, as it was the second smallest line and is a mix of surface and sub surface. In the same year it was rolled out to the District, Circle, Hammersmith & City, Metropolitan and Victoria lines, with the Bakerloo, Piccadilly, Jubilee, Waterloo & City and Central lines following in 2007.[24] The final line, the Northern, was handed over in November 2008. 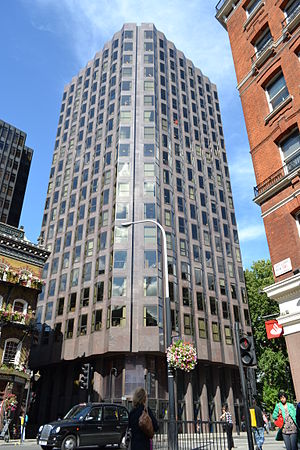 Rail service fares in the capital are calculated by a zonal fare system. London is divided into eleven fare zones, with every station on the London Underground, London Overground, Docklands Light Railway and, since 2007, on National Rail services, being in one, or in some cases, two zones. The zones are mostly concentric rings of increasing size emanating from the centre of London. They are (in order):

Superimposed on these mode-specific regimes is the Travelcard system, which provides zonal tickets with validities from one day to one year, and off-peak variants. These are accepted on the DLR, buses, railways, trams, the Underground and provides a discount on many river services fares.

The Oyster card is a contactless smart card system introduced for the public in 2003, which can be used to pay individual fares (pay as you go) or to carry various Travelcards and other passes. It is used by holding the card close to the yellow card reader. Card readers are found on ticket gates where otherwise a paper ticket could be fed through, allowing the gate to open and the passenger to walk through, and on stand-alone Oyster validators, which do not operate a barrier. Since 2010, Oyster Pay as you go has been available on all National Rail services within London. Oyster Pay as you go has a set of daily maximum charges that are the same as buying the nearest equivalent Day Travelcard.

Contactless Visa, Maestro, MasterCard and American Express Debit and Credit cards issued in the UK are accepted for travel on London Underground, London Overground, Docklands Light Rail, most National Rail, London Tramlink and Bus services. This works in the same way for the passenger as an Oyster Card, including the use of capping and reduced fares compared to paper tickets.

Transport for London also accepts Apple Pay in the same way as contactless payment cards,[25] the fares would be the same as those charged on an Oyster card and customers would benefit from the same daily capping. Since then, TfL has become the most popular Apple Pay merchant following the UK launch.[26][27][28][29]

Each of the main transport units has its own corporate identity, formed by differently-coloured versions of the standard roundel logo and adding appropriate lettering across the horizontal bar. The roundel rendered in blue without any lettering represents TfL as a whole (see Transport for London logo), as well as used in situations where lettering on the roundel is not possible (such as bus receipts, where a logo is a blank roundel with the name "London Buses" to the right). The same range of colours is also used extensively in publicity and on the TfL website.

Transport for London has always mounted advertising campaigns to encourage use of the Underground. For example, in 1999, they commissioned artist Stephen Whatley to paint an interior - 'The Grand Staircase' – which he did on location inside Buckingham Palace. This painting was reproduced on posters and displayed all over the London Underground.[30]

In 2010 they commissioned artist Mark Wallinger to assist them in celebrating the 150th anniversary of the Underground, by creating the Labyrinth Project, with one painting to hang permanently in each of the Tube's 270 stations.[31]