England has a dense and modern transportation infrastructure. The Department for Transport is the government department responsible for the English transport network.

The British Rail network is largely based on services originating from one of London's rail termini operating in all directions. Internal intercity services include:

Short distance travel that doesn't pass through London is generally referred to as cross country travel. Most services are operated by CrossCountry and often terminate in South East Wales or Scotland. The Oxford to Cambridge or Varsity Line is due to be rebuilt to enable journeys avoiding London and Birmingham.

Regional train services are also operated by these, and other, train companies, and focus on the major cities, several of which have developed commuter and urban rail networks.

o cities in England have rapid transit systems. Most well known is the London Underground (commonly known as the Tube), the oldest and longest rapid transit system in the world. Also in London are the separate Docklands Light Railway (though this is integrated with the Underground in many ways), and the London Overground. Outside of London, there is the Tyne and Wear Metro, focused on Newcastle upon Tyne, Gateshead and Sunderland. Hi 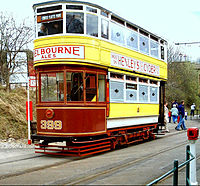 A vintage British tram from the former Leeds Tramway, preserved at the National Tramway Museum.

Tram systems were popular in England in the late 19th and early 20th centuries. However, with the rise of the motor bus and later the car they began to be widely dismantled in the 1950s. By 1962, only Blackpool tramway remained. However, in recent years trams have seen a revival, as in other countries, as have light rail systems. Examples of this second generation of tram systems and light rail include:

See also: Category:Tram transport in the United Kingdom, Trams in London, and Trams in Europe

England contains a vast majority of the UK's motorways, dating from the first built in 1958 (part of the M6) to the most recent (M6 Toll). Important motorways include:

Note: There is no definition of a major motorway. Those in the table are particularly important due to their destinations, and other motorways exist. Where a major city (such as London) is given as a destination it is usually to give a general idea of the location, as most (London) motorways end outside the actual city (for example, the M40 actually ends in Buckinghamshire).