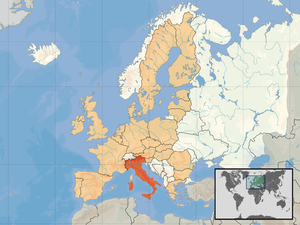 Italy within the European Union

Italy has well developed public and private transportation options. Italian rail network is extensive, especially in the north, generally eclipsing the need for an alternative such as bus or air (both of which, however, exist to some extent). While a number of private railroads exist and provide mostly commuter-type services, the national railway, Ferrovie dello Stato, also provides sophisticated high-speed rail service that joins the major cities of Italy from Naples through northern cities such as Milan and Turin. Italy has 2507 people and 12.46 km2 (World's seventh) per km of rail track.[1]

Italy's road network is also widespread, with a total length of about 487,700 km.[2] It comprises both an extensive motorway network (6,400 km), mostly toll roads, and national and local roads.

Because of its long seacoast, Italy also has a large number of harbors for the transportation of both goods and passengers. Italy has been a seafaring peninsula dating back to the days of the Etruscans and the Greeks. 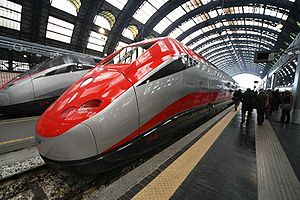 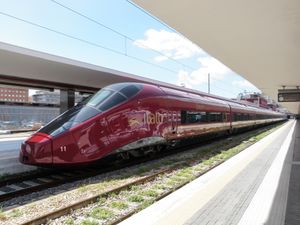 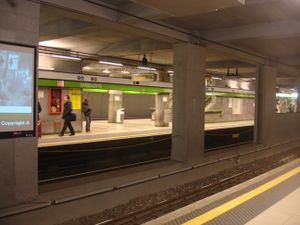 A station on the Milan Metro, the largest rapid transit system in Italy
Main article: Rail transport in Italy
See also: List of railway companies, List of town tramway systems in Italy, and List of trolleybus systems in Italy

A major part of the Italian rail network is managed and operated by Ferrovie dello Stato, a state owned company. Other regional agencies, mostly owned by public entities such as regional governments, operate on the Italian network. The Italian railways are subsidised by the government, receiving €8.1 billion in 2009.[4]

Travellers who often make use of the railway during their stay in Italy might use Rail Passes, such as the European Inter-Rail or Italy's national and regional passes. These rail passes allow travellers the freedom to use regional trains during the validity period, but all high-speed and intercity trains require a 10-euro reservation fee. Regional passes, such as "Io viaggio ovunque Lombardia", offer one-day, multiple-day and monthly period of validity. There are also saver passes for adults, who travel as a group, with savings up to 20%. Foreign travellers should purchase these passes in advance, so that the passes could be delivered by post prior to the trip. When using the rail passes, the date of travel needs to be filled in before boarding the trains.[5]

Italy is the world's first country to establish a High-speed rail network. In 1967, the Bologna-Florence high-speed line, with speeds up to 230 km/h, opened to passenger traffic and reduced the journey time from 1 hour 34 minutes to 59 minutes. Subsequently, high-speed rail tracks connect Milan to Bologna (1 hour), Florence to Rome (1 hour 30 minutes) and Rome to Naples (1 hour 10 minutes).

With the introduction of high-speed trains, Intercity trains are limited to few services per day on mainline and regional tracks.

The daytime services (Intercity IC), while not freuquent and limited to one or two trains per route, are essential in providing access to cities and towns off the railway's mainline network. The main routes are Trieste to Rome (stopping at Venice, Bologna, Prato, Florence and Arezzo), Milan to Rome (stopping at Genoa, La Spezia, Pisa and Livorno / stopping at Parma, Modena, Bologna, Prato, Florence and Arezzo), Bologna to Lecce (stopping at Rimini, Ancona, Pescara, Bari and Brindisi) and Rome to Reggio di Calabria (stopping at Latina and Naples). In addition, the Intercity trains provide a more economical means of long-distance rail travel within Italy.

The night trains (Intercity Notte ICN) have sleeper compartments and washrooms, but no showers on board. Main routes are Rome to Bolzano/Bozen (calling at Florence, Bologna, Verona, Rovereto and Trento), Milan to Lecce (calling at Bologna, Rimini, Ancona, Pescara, Bari and Brindisi), Turin to Lecce (calling at Alessandria, Voghera, Piacenza, Parma, Bologna, Rimini, Pescara, Bari and Brindisi) and Reggio di Calabria to Turin (calling Naples, Rome, Livorno, La Spezia and Genova). Most portions of these ICN services run during the night; since most services take 10 to 15 hours to complete a one-way journey, their day-time portion provide extra train connections to complement with the Intercity services.

There are a total of 86 intercity trains running within Italy per day.

Regional train agencies exist: their train schedules are largely connected to and shown on Trenitalia, and tickets for such train services can be purchased through Trenitalia's national network. Other regional agencies have separate ticket systems which are not mutually exchangeable with that of Trenitalia. These "regional" tickets could be purchased at local newsagents or tobacco stores instead. 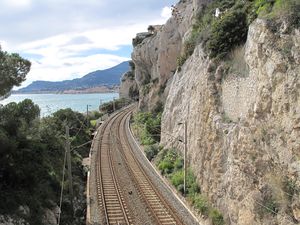 Italy has 11 rail border crossings over the Alpine mountains with her neighbouring countries: six are designated as mainline tracks and two are metre-gauge tracks. The six mainline border crossings are: two with France (one for Nice and Marseill; the other for Lyon and Dijon), two with Switzerland (one for Brig, Bern and Geneva; the other for Chiasso, Lugano, Lucerne and Zürich), and two with Austria (one for Innsbruck; the other for Villach, Graz and Vienna). The two metre-gauge track crossings are located at the border town of Tirano (enters Switzerland's Canton Graubünden/Grisons) and Domodossola (enters Switzerland's Locarno).

There is a railway line connecting Italy's northeastern port of Trieste to Slovenia, but no passenger or freight services operate on this track. Consequently, there is no direct connections between Trieste and Ljubljana, the capital of Slovenia, despite the proximity of both cities.

The Vatican City is also linked to Italy with a railway line and used only for special occasions.[7]

San Marino used to have a narrow gauge rail connection with Italy; this was dismantled in 1944.[8] 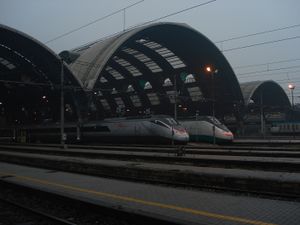 Stations with darker background are also served by High-speed trains 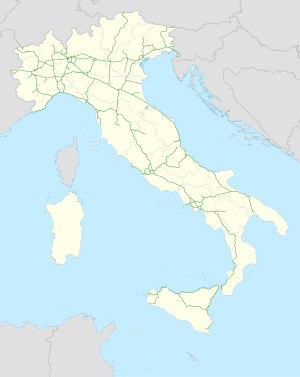 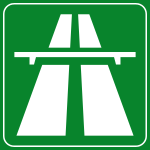 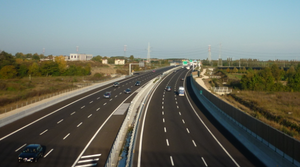 A motorway in Italy
Main articles: Autostrade of Italy and State highway (Italy)

Italy has 2,400 km (1,491 mi) of navigable waterways for various types of commercial traffic, although of limited overall value.[11]

In the northern regions of Lombardy and Venetia, commuter ferry boats operate on Lake Garda and Lake Como to connect towns and villages at both sides of the lakes. The waterways in Venice, including the Grand Canal, serve as the vital transportation network for local residents and tourists. Frequent shuttle ferries (vaporetta) connect different points on the main island of Venice and other outlying islands of the lagoon. In addition, there are direct shuttle boats between Venice and the Venice Marco Polo Airport. 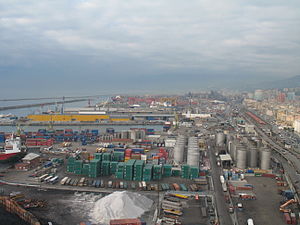 Genoa has one of the busiest seaport in Italy

Italy is the fifth in Europe by number of passengers by air transport, with about 148 million passengers or about 10% of the European total in 2011.[13] Most of passengers in Italy are on international flights (57%). A big share of domestic flights connect the major islands (Sardinia and Sicily) to the mainland.[13] Domestic flights between major Italian cities as Rome and Milan still play a relevant role but are declining since the opening of the Italian high-speed rail network in recent years.

There are long-distance intercity buses run by local companies, but the services are infrequent during the week and usually provide a secondary link to railway services.

This makes a daily total of 12 services in each direction between Rome and Bologna.

Airport shuttle buses, however, are highly developed and convenient for rail travellers. Most airports in Italy are not connected to the railway network, except Rome Fiumicino "Leonardo da Vinci" Airport and Milan Malpensa Airport. In Bologna, a light-rail track is under construction to connect Bologna Airport to the main railway station.

Media related to Transport in Italy at Wikimedia Commons