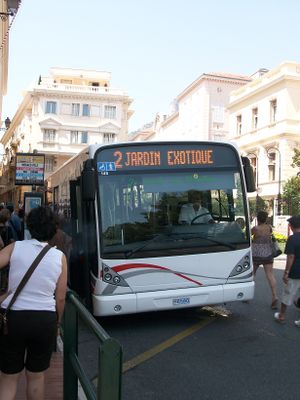 Line 2 at a bus stop

Transport in Monaco is facilitated with road, air, rail, and water networks. Rail transport is operated by SNCF and its total length is 1.7 km. Monaco has five bus routes operated by Compagnie des Autobus de Monaco. There are also two other bus routes which connect Monaco with neighboring regions such as Nice and Menton. 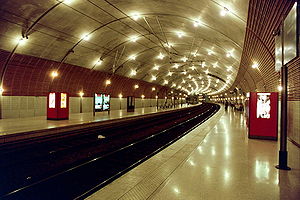 The railway is totally underground within Monegasque territory, and no trains can be seen at ground level within the nation. It links Nice to Ventimiglia (Italy) through the principality, and was opened in 1868. Two stations were originally provided, named 'Monaco' and 'Monte-Carlo', but neither remain in current use. The railway line was re-laid, in a new permanent way in underground tunnels, constructed in two stages. The first, in 1964, was a 3,500 metre tunnel (mostly in French territory) which rendered the original Monte-Carlo station redundant. The second stage, opened in 1999, was a 3 km-long tunnel linked to the first one, allowing the new "underground railway station of Monaco-Monte Carlo" to open. Where the above ground railway was is now available for development, schools, hotels and commercial facilities, can locate here totaling some four hectares. This station is also served by international trains (including the French TGV) and regional trains ("TER").

Monaco has 50 km of urban roads which provide access to the A8 autoroute. Monaco buries its highways so that traffic flow can be improved and so more land is available.

There are seven main inclined lifts (including Elevators and/or travelators) which provide public transport:[1] 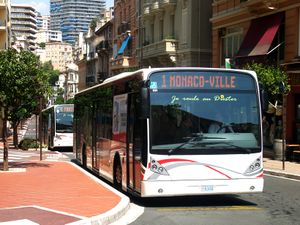 Line 1 with Line 6 behind it

There are six bus routes in Monaco, all operated by Compagnie des Autobus de Monaco (CAM).[2] There are 143 bus stops through the Principality.[3] 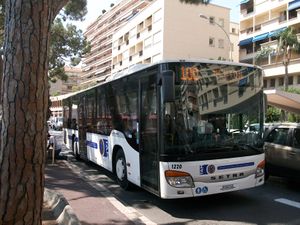 There are four other bus routes which connect Monaco with neighbouring regions.

There is a ferry service "Bateaubus" which operates between both sides of Monaco port. The boat is powered by electricity and operates under the urban bus system tariff.

A narrow gauge subway line is a perennial project in Monaco, which has not been built thus far.

There are two ports in Monaco, one is Port Hercules and the other is in Fontvieille. There are seasonal ferry lines like the one from Nice to Saint-Tropez.

There is no airport in the Principality of Monaco. The closest airport is Cote d'Azur Airport in Nice, France, which is connected to Monaco by the Express 110 bus.

A heliport, the Monaco Heliport, is the only aviation facility in the principality. It features shuttle service to and from the international airport at Nice, France. As of May 2005, all Royal Helicopter Service is provided by the James Drabble Aviation Services Committee. This deal sparked a great deal of controversy in the National Council of Monaco, as there was no precedent yet set. Helicopter charter services to French ski resorts are also available.