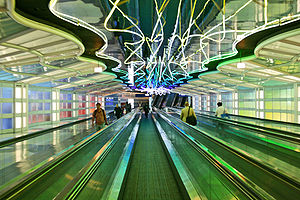 Michael Hayden's neon installation "Sky's the Limit" (1987) in a subterranean walkway at O'Hare Airport. Sometimes called "The Gershwin Tunnel", the walkway connects concourses B and C of Terminal 1, which is operated by United Airlines. 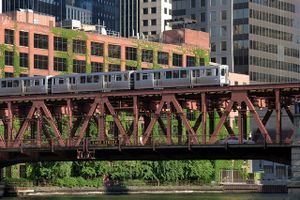 Chicago, Illinois is the third-largest city in the United States and a major transportation hub. The city is served by two major airports, and is the main freight rail hub of North America.

Mass transit in much of the Chicago metropolitan area is managed through the Regional Transportation Authority (RTA), which was installed by referendum in 1974. The RTA provides transportation services through the funding of three subordinate agencies: the Chicago Transit Authority, Metra, and Pace.

There are several other smaller commercial airports in the Chicago area, these include: 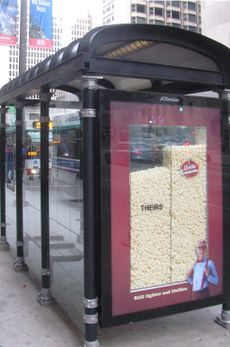 Pace, another service board within the Regional Transportation Authority, operates a primarily-suburban bus service that also offers some routes into Chicago. 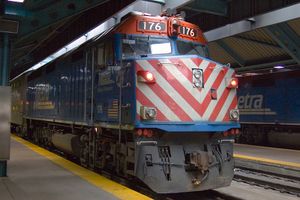 The Northeastern Illinois Regional Commuter Railroad Corporation, the third service board within the Regional Transportation Authority, and under its service mark Metra, operates eleven commuter rail lines that serve 200+ stations across the RTA's six-county service area. Unlike the 'L' lines, fare pricing is based on zones instead of a flat boarding fee. In addition, being mainly commuter rail service, frequent service is generally only provided during rush hours, although Metra is known for its speed and reliability. There are eleven lines, three of which also have service along additional branch lines: in addition to the main lines, the Metra Electric District has two branches, and the Rock Island District and Union Pacific Northwest have one branch each. Each line connects into one of four different downtown stations: Union Pacific North, West, and Northwest arrive in the Richard B. Ogilvie Transportation Center (known more casually as the "North Western Station"); Milwaukee District North and West, North Central Service, SouthWest Service, BNSF Railway, and Heritage Corridor converge in Union Station (which is also the nexus of Amtrak); the Rock Island District arrives in the LaSalle Street Station; and the Metra Electric District arrives in Millennium Station (formerly Randolph Street Terminal).

The Metra Electric District is Chicago's oldest continuing commuter train (1856), and shares the railway with the South Shore Line, operated by the Northwest Indiana Commuter Transit District ("NICTD"), which is a separate but analogous quasi-governmental entity, partially funded by the RTA. The South Shore Line is an interurban railroad that operates between Chicago and South Bend, Indiana. Like the Metra Electric District, it arrives and departs from Millennium Station. 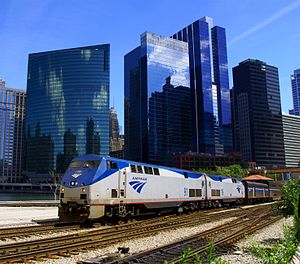 Amtrak owns and operates Union Station which is a major intercity passenger rail hub with connections to Metra and the 'L.' Before Amtrak's takeover of passenger service in 1971, trains ran out of Central Station, Dearborn Station, LaSalle Street Station, Chicago and North Western Terminal as well as Union Station.

The City of Chicago offered free tourist trolleys that served the downtown area.[4] The "trolleys" were actually buses painted to look like historical streetcars. They ran every 20 to 30 minutes and served areas popular with tourists that didn't have 'L' stations, such as the Museum Campus, Navy Pier, and the Magnificent Mile. The Free Trolley service was permanently discontinued in 2009.

The free trolleys shouldn't be confused with the private-sector Chicago Trolley Company, which offers guided tours and charge fares. They serve different routes but largely the same downtown area. Their vehicles are also buses rather than real trolleys.

Chicago taxicabs are privately operated under a medallion license from the city. Chicago taxi regulations were revamped in a 2012 reform package backed by Mayor Rahm Emanuel; the package raised the "flag pull" initial hire charge by $1, mandated credit card readers and GPS, and placed new limits on fleet age.[5]

City and private initiatives have increased the proportion of hybrid and alternative fuel vehicles from less than one percent to over 74 percent of the city's cab fleet since 2008.[6] 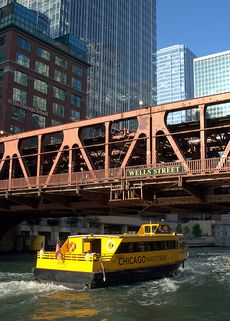 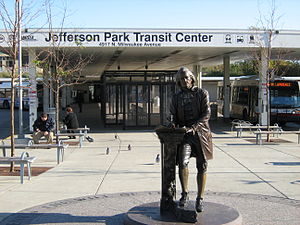 Bicycles are permitted on CTA buses during all operating hours, and on CTA trains every weekday except from 7:00 a.m. to 9:00 a.m. and 4:00 p.m. to 6:00 p.m.(during rush hour) On Saturdays, Sundays, and holidays, bicycles are allowed on trains all day. If a person boards the train with his/her bicycle before the hours listed above and his/her trip extends into those hours, the CTA allows him/her to finish his/her trip. If trains are crowded, the use of trains by cyclists may be restricted by the rail operator as appropriate. Bicycles are not permitted on trains July 3 due to Independence Day celebrations. Folding bikes may be brought aboard CTA trains and buses during all operating periods, including rush hour.

Transit operators have the discretion to deny access to anyone with a bike if they decide that conditions are too crowded. The CTA's entire bus fleet is now equipped with bike racks in front which can accommodate two bicycles. All CTA trains accept bicycles, although bikes were discouraged on the 2200-series rail cars with "blinker doors" (if they were turned sideways, they would look like a blinking eye when opening and closing). Only standard-size bicycles are allowed on all CTA vehicles; tandems are not allowed.[10]