The transportation system of Georgia is a cooperation of complex systems of infrastructure comprising over 1,200 miles (1,900 km) of interstates and more than 120 airports and airbases serving a regional population of 59,425 people. 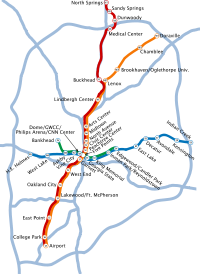 Map of the MARTA rail system

The River Street Streetcar is a heritage streetcar line in Savannah, Georgia. It began regular operation on February 11, 2009, and shuttles between 7 stops along River Street, next to the Savannah River.[5]

The BeltLine is a former railway corridor around the core of Atlanta, which is under development in stages as a multi-use trail. Using existing rail track easements, it aims to improve not only transportation, but to add green space and promote redevelopment.[citation needed] There are longer term visions for streetcar or light rail lines along all or part of the corridor.[citation needed]

Georgia lacks a united bus system and is instead, served by various separate systems that serve various areas of the state.

The state of Georgia has 1,244 miles (2,002 km) of interstate highway within its borders. Georgia's major Interstate Highways are Interstate 16 (I-16), I-20, I-75, I-85, and I-95. Other important interstate highways are I-24 and I-59. I-285 is Atlanta, Georgia's perimeter route and I-575 connects counties in North Georgia to I-75.[8] The Georgia Department of Transportation maintains only 16 percent of the roads in the state. The other 84 percent are the responsibility of the counties and cities; 75 percent of those roads are county roads.[9]

All of Georgia's Interstate highways are as follows:

The state of Georgia has an extensive system of U.S. highways.

All of Georgia's U.S. highways are as follows:

The state of Georgia has an extensive system of state routes. 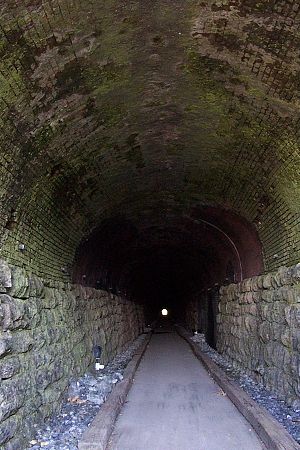 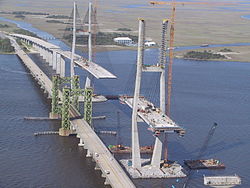 The Sidney Lanier Bridge is a cable-stayed bridge that spans the Brunswick River in Brunswick, carrying four lanes of US 17/SR 25. The current bridge was built as a replacement to the original lift bridge which was twice struck by ships. It is currently the longest-spanning bridge in Georgia and is 480 feet (150 m) tall. It is also the seventy-sixth largest cable-stayed bridge in the world. It was named for poet Sidney Lanier. Each year (usually in February), there is the "Bridge Run" sponsored by Southeast Georgia Health System when the south side of the bridge is closed to traffic and people register to run (or walk) the bridge.

The nearby town of Tunnel Hill, Georgia (originally Tunnelsville) was created and named for the first tunnel, and was the supply base for its construction materials and worker housing.[11]

Georgia has a system of State Bicycle Routes.[13]

The city of Atlanta limits the number of CPNCs (Certificate of Public Necessity and Convenience) to 1,600 and is the maximum number of licensed taxis allowed within the city.[14]

The Port of Savannah is a major U.S. seaport located at Savannah, Georgia. Its extensive facilities for oceangoing vessels line both sides of the Savannah River approximately 18 miles (29 km) from the Atlantic Ocean. Operated by the Georgia Ports Authority (GPA), the Port of Savannah competes primarily with the Port of Charleston in Charleston, South Carolina to the northeast, and the Port of Jacksonville in Jacksonville, Florida to the south. The GPA operates one other Atlantic seaport in Georgia, the Port of Brunswick, located at Brunswick, Georgia, as well as two interior ports linked to the Gulf of Mexico, Port Bainbridge and Port Columbus. 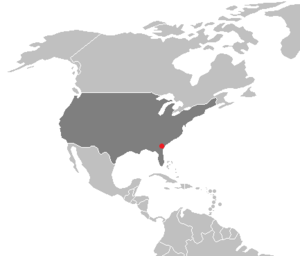 The location of the Port of Savannah, GA

Between 2000 and 2005 alone, the Port of Savannah was the fastest-growing seaport in the United States, with a compounded annual growth rate of 16.5 percent (the national average is 9.7 percent).

The Georgia Rail Passenger Program is a plan for seven railway commuter routes to serve the Atlanta suburbs and nearby cities.

The Athens route will connect nine of Georgia's colleges and universities, including Georgia Institute of Technology, Georgia State University, Emory University, Georgia Gwinnett College, and the University of Georgia. Furthermore, the commuter rail will link the Centers for Disease Control, the new Paul D. Coverdell Center for Biomedical and Health Sciences, as well as the emerging BioScience Corridor along Georgia State Route 316.

The route is estimated to divert 1.8 million drivers from the highways by 2025.[19] As many as 8,000 individuals or more could conceivably use the system every day, and it could remove 5,300 cars daily from already overtaxed roadways during peak travel times. Also, previous studies have indicated that commuter rail is 25 times safer than driving.