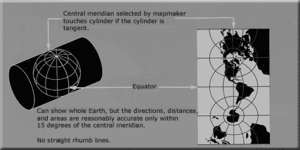 In constructing a map on any projection, a sphere is normally chosen to model the Earth when the extent of the mapped region exceeds a few hundred kilometers in length in both dimensions. For maps of smaller regions, an ellipsoidal model must be chosen if greater accuracy is required; see next section. The spherical form of the transverse Mercator projection was one of the seven 'new' projections presented, in 1772, by Johann Heinrich Lambert.[1][2] (The text is also available in a modern English translation.[3]) Lambert did not name his projections; the name transverse Mercator dates from the second half of the nineteenth century.[4] The principal properties of the transverse projection are here presented in comparison with the properties of the normal projection.

The projection, as developed by Gauss and Krüger, was expressed in terms of low order power series which were assumed to diverge in the east-west direction, exactly as in the spherical version. This was proved to be untrue by British cartographer E.H. Thompson, whose unpublished exact (closed form) version of the projection, reported by L.P. Lee in 1976,[8] showed that the ellipsoidal projection is finite (below). This is the most striking difference between the spherical and ellipsoidal versions of the transverse Mercator projection: Gauss-Krüger gives a reasonable projection of the whole ellipsoid to the plane, although its principal application is to accurate large scale mapping "close" to the central meridian. 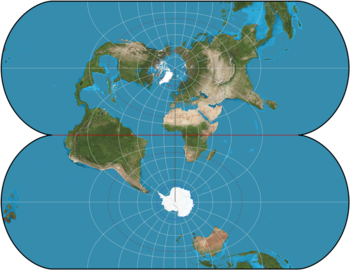 In most applications the Gauss–Krüger is applied to a narrow strip near the central meridians where the differences between the spherical and ellipsoidal versions are small, but nevertheless important in accurate mapping. Direct series for scale, convergence and distortion are functions of eccentricity and both latitude and longitude on the ellipsoid: inverse series are functions of eccentricity and both x and y on the projection. In the secant version the lines of true scale on the projection are no longer parallel to central meridian; they curve slightly. The convergence angle between projected meridians and the x constant grid lines is no longer zero (except on the equator) so that a grid bearing must be corrected to obtain an azimuth from true north. The difference is small, but not negligible, particularly at high latitudes.

Implementations of the Gauss–Krüger projection

The Krüger–λ series were the first to be implemented, possibly because they were much easier to evaluate on the hand calculators of the mid twentieth century.

The Krüger–n series are described on the page Transverse Mercator: series in ''n'' (third flattening). They have been implemented (to fourth order in n) by the following nations.

Higher order versions of the Krüger–n series have been implemented to seventh order by Ensager and Poder[21] and to tenth order by Kawase.[22] Apart from a series expansion for the transformation between latitude and conformal latitude, Karney has implemented the series to thirtieth order.[23]

Exact Gauss-Krüger and accuracy of the truncated series

The exact solution of E. H. Thompson, described by L.P. Lee,[8] is summarized on the page Transverse Mercator: exact solution. It is constructed in terms of elliptic functions (defined in chapters 19 and 22 of the NIST[24] handbook) which can be calculated to arbitrary accuracy using algebraic computing systems such as Maxima.[25] Such an implementation of the exact solution is described by Karney (2011).[23]

The exact solution is a valuable tool in assessing the accuracy of the truncated n and λ series. For example, the original 1912 Krüger–n series compares very favourably with the exact values: they differ by less than 0.31 μm within 1000 km of the central meridian and by less than 1 mm out to 6000 km. On the other hand the difference of the Redfearn series used by Geotrans and the exact solution is less than 1 mm out to a longitude difference of 3 degrees, corresponding to a distance of 334 km from the central meridian at the equator but a mere 35 km at the northern limit of an UTM zone. Thus the Krüger–n series are very much better than the Redfearn λ  series.

The Redfearn series become much worse as the zone widens. Karney discusses Greenland as an instructive example. The long thin landmass is centred on 42W and, at its broadest point, is no more than 750 km from that meridian while the span in longitude reaches almost 50 degrees. Krüger–n is accurate to within 1mm but the Redfearn version of the Krüger–λ series has a maximum error of 1 kilometre.

Karney's own 8th order (in n) series is accurate to 5 nm within 3900 km of the central meridian.

Formulae for the spherical transverse Mercator

The normal aspect of a tangent cylindrical projection of the sphere

Conformality implies that the point scale, k, is independent of direction: it is a function of latitude only:

For the secant version of the projection there is a factor of k0 on the right hand side of all these equations: this ensures that the scale is equal to k0 on the equator.

The relation between the graticules

The direct formulae giving the Cartesian coordinates (x,y) follow immediately from the above. Setting x = y′ and y = −x′ (and restoring factors of k0 to accommodate secant versions)

The above expressions are given in Lambert[1] and also (without derivations) in Snyder,[13] Maling[27] and Osborne[26] (with full details).

Inverting the above equations gives 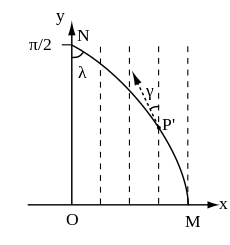 The angle of convergence

The convergence angle γ at a point on the projection is defined by the angle measured from the projected meridian, which defines true north, to a grid line of constant x, defining grid north. Therefore γ is positive in the quadrant north of the equator and east of the central meridian and also in the quadrant south of the equator and west of the central meridian. The convergence must be added to a grid bearing to obtain a bearing from true north. For the secant transverse Mercator the convergence may be expressed[26] either in terms of the geographical coordinates or in terms of the projection coordinates:

Formulae for the ellipsoidal transverse Mercator