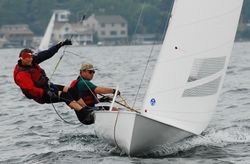 A Flying Dutchman with the crew on the trapeze whilst the helm hikes out.

An additional benefit is the ability to "walk" along the gunwale to balance the boat's trim fore and aft. This is necessary to prevent racing catamarans such as the Tornado from digging the bow into the water, also called pitchpoling, and causing a nosedive and often a spectacular capsize.

Boats may have only one trapeze, such as the 420, where only the crew uses the trapeze. Boats, such as the 49er, may have trapeze wires for both the skipper and the crew. Trapeze has several colloquial names such as "the wire" or simply "the trap".

When a boat loses power in its sails, and heels to the windward side, the crew on the trapeze may get dipped in the water if they do not react in time.

Some classes allow footloops on the gunwale to allow those on the trapeze to locate their feet with relative security. This helps to prevent the crew from swinging forward, sometimes round the forestay when the boat decelerates suddenly.

Due to safety concerns, the International Sailing Federation changed the rules in 2004 concerning trapeze harnesses, effective January 1, 2009: "40.2 A trapeze or hiking harness shall have a device capable of quickly releasing the competitor from the boat at all times while in use.” However, the ISAF 2009-2013 Racing Rules of Sailing which took effect January 1, 2009 does not include this provision, so this rule change is postponed.

Quick release harnesses are already widely in use, and make it possible for sailors to unhook themselves from the wire from all angles while it is under tension, thus decreasing the chance of getting trapped underwater or in dangerous conditions. The adoption of quick release harnesses has not been universal due to the reduced reliability of the moving parts; stories of such systems releasing unexpectedly have caused many to shun them in favour of traditional fixed hooks.

There are counterclaims for the origin of the device: