From Infogalactic: the planetary knowledge core
Jump to: navigation, search
This article is about the Cistercian order. For the cheese, see Trappista cheese. For the beer, see Trappist beer. For the telescope, see TRAPPIST.

The Order of Cistercians of the Strict Observance (O.C.S.O.: Ordo Cisterciensis Strictioris Observantiae) is a Roman Catholic religious order of cloistered contemplative monastics who follow the Rule of St. Benedict. A branch of the Order of Cistercians, they have communities of both monks and nuns, commonly referred to as Trappists and Trappistines, respectively.

The order takes its name from La Trappe Abbey or La Grande Trappe, located in the French province of Normandy. A reform movement began there in 1664, in reaction to the relaxation of practices in many Cistercian monasteries.[1] Armand Jean le Bouthillier de Rancé, originally the commendatory abbot of La Trappe, led the reform. As commendatory abbot, de Rancé was a layman who obtained income from the monastery but had no religious obligations. After a conversion of life between 1660 and 1662, de Rancé formally joined the abbey and became its regular abbot in 1663.[2] In 1892 the reformed "Trappists" broke away from the Cistercian order and formed an independent monastic order with the approval of the pope.[3] 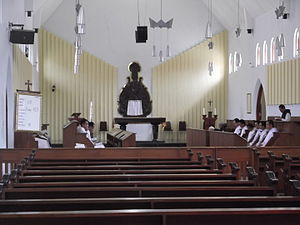 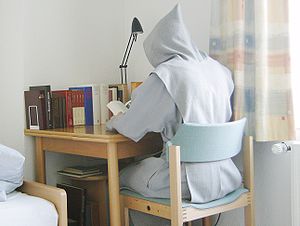 A Trappist novice reading in his cell.

The Rule of St. Benedict, written in the sixth century, guides the lives of Trappists. The Rule describes the ideals and values of a monastic life.

"Strict Observance" refers to the Trappists' goal of following closely St. Benedict's Rule and taking the three vows described in his Rule (c. 58): stability, fidelity to monastic life, and obedience. Benedict's insistence on lack of speech has some impact on their way of life, though (contrary to popular belief) they do not take a vow of silence.[4] Trappist monks generally speak only when necessary; thus idle talk is strongly discouraged. According to St. Benedict, speech disturbs a disciple's quietude and receptivity, and may tempt one to exercise one's own will instead of the will of God. Speech that leads to unkind amusement or laughter is seen as evil and is banned.[5] A Trappist sign language, distinct from other forms of monastic sign language, has developed to render speaking unnecessary. Meals are usually taken in contemplative silence as members of the order are supposed to listen to a reading.[6]

Comparing with the Benedictines and the Cistercians,[7][8] Trappists fully abstain from meat as regards "four footed animals".[9] While living as vegetarians, they may sometimes eat fish and their diet mostly consist of "vegetables, beans, and grain products".[9]

Though each monastery is autonomous and may have different rules, generally the stages to enter the Trappist life can be described as follows:[10]

The 48th chapter of the Rule of St. Benedict states "for then are they monks in truth, if they live by the work of their hands".[11]

Following this rule, most Trappist monasteries produce goods that are sold to provide income for the monastery. The goods produced range from cheese, bread and other foodstuffs to clothing and coffins, though they are most famous[12] for their beers, which are unique within the beer world,[13] and are lauded for their high quality and flavour.[14] As the order does not require abstinence from alcohol, some monasteries produce and sell alcoholic beverages. Monasteries in Belgium and the Netherlands, such as Orval Abbey and Westvleteren Abbey, brew beer both for the monks and for sale to the general public. Trappist beers contain residual sugars and living yeast, and, unlike conventional beers, will improve with age.[15] Westvleteren 12 is often considered to be the single best beer in the world.[16]

The Trappist monks of the Tre Fontane (Three Fountains) Abbey raise the lambs whose wool is used to make the pallia of new metropolitan archbishops. The pope presents the pallia to them on the Solemnity of Saints Peter and Paul, Holy Apostles; they are blessed by the pope on the Feast of Saint Agnes, January 21.

There are nearly 170 Trappist monasteries and convents in the world, homes to approximately 2,100 Trappist monks and 1,800 Trappistine nuns.[17] 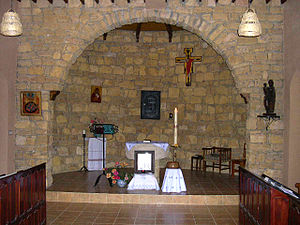 Chapel of the Priory of Our Lady of Atlas, Midelt, Morocco. 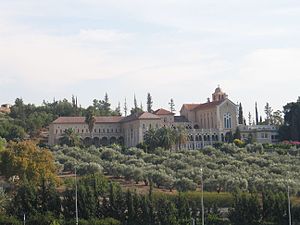 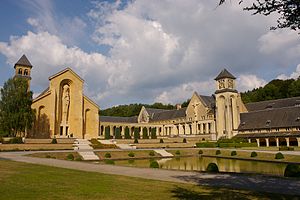 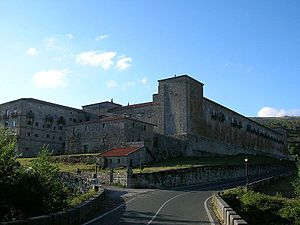 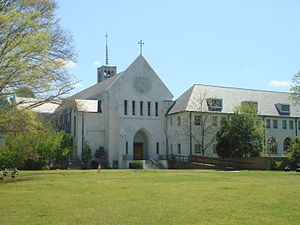 Monastery of the Holy Spirit in Conyers, Georgia, USA