Travis Alan Wood (born February 6, 1987), is an American professional baseball pitcher for the Chicago Cubs of Major League Baseball. He previously played in MLB for the Cincinnati Reds.

Born and raised in Little Rock, Arkansas, Wood attended Bryant High School where he starred in baseball and football. At the Babe Ruth World Series, Wood tossed a no-hitter, striking out 17, and at Bryant, Wood received All-State honors in each of his three seasons at the school. During his junior season, Wood also led Bryant to a state championship, and was Arkansas Gatorade Player of the Year in 2004 and 2005.[1] 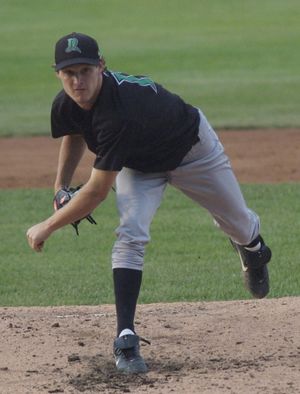 Wood pitching for the Dayton Dragons, Single-A affiliates of the Cincinnati Reds, in 2006.

Wood was selected 60th overall in the 2005 Major League Baseball Draft by the Cincinnati Reds out of Bryant High School. He chose not to attend college and went straight to professional baseball.[citation needed]

Wood's first season as a professional was split between the Reds' Rookie Class teams, the Gulf Coast League Reds and the Billings Mustangs. He went a combined 2–0 with a 1.29 ERA in 14 games, including 11 starts. Wood held batters to a .166 batting average, struck out 67, and pitched 47.2 innings, including 17.2 scoreless over his first six appearances.[citation needed]

Wood spent all of 2006 with the Class-A Dayton Dragons. He started 27 games and compiled a 10-5 record and a 3.66 ERA. Wood fanned 133 batters and held opponents to a .215 batting average. He was named Midwest League Pitcher of the Week for May 15–21, going 2–0 in 10.1 innings, striking out 13, and allowing one earned. Wood allowed only two runs in 26 innings pitched, while striking out 14 in his final four starts of the season.[citation needed]

2009 for Wood started in Carolina, the Reds new Double-A affiliate. That time around, he improved drastically over his previous season in Double-A. Wood pitched 119 innings over 19 starts, going 9-3 with a 1.21 ERA. Allowing just 16 earned runs on 78 hits and 37 walks, he also stuck out 103 batters and hitters batted only .189 off the lefty.[citation needed]

Earning a call-up to Triple-A Louisville, Wood went 4–2 in 48.2 innings for the Bats. He allowed 43 hits over eight starts, walking 16 and striking out 32.[citation needed]

He was added to the Reds' 40-man roster after the 2009 season to protect him from the Rule 5 Draft.[2] Wood was one of the last players cut from the Reds' roster in Spring Training, and was one of many competing for the Reds' fifth starter spot. In a crowded race featuring veterans Mike Lincoln and Justin Lehr, young arms Micah Owings and Matt Maloney, and prospects Sam LeCure, Aroldis Chapman, and Mike Leake, Wood came down to the last two but was cut in favor of Leake. He started the season in Louisville.[citation needed]

On June 30, Wood was called up from Triple-A Louisville replacing Daniel Ray Herrera on the Reds active roster [3] Wood made his major league debut on July 1, 2010 versus the Chicago Cubs at Wrigley Field, getting a no decision in an eventual 3–2 Reds victory.[citation needed]

In his third career start, versus the Philadelphia Phillies at Citizens Bank Park on July 10, 2010, Wood flirted with a perfect game, pitching eight flawless innings before surrendering a double to Phillies catcher Carlos Ruiz in the bottom of the ninth inning. Regardless, Wood actually could not have finished the perfect game in the ninth inning, because Phillies ace Roy Halladay, who himself had thrown a perfect game earlier in the 2010 season, also was pitching a shutout through nine innings. Wood exited after nine innings of one-hit ball, and the Reds would later lose the game 1–0 in 11 innings, with Ruiz scoring the winning run. Wood hit his first career home run on September 4, 2010 off St. Louis Cardinals' Adam Wainwright. Wood finished the 2010 season 5-4 with a 3.51 ERA in 17 starts.

On December 21, 2011, Wood was traded to the Chicago Cubs, along with outfielder Dave Sappelt and a minor league second baseman Ronald Torreyes in exchange for left-handed reliever Sean Marshall.[4] Wood was called up to the major league club in early May 2012 after Chris Volstad was demoted to Iowa because of his 0–6 start. Wood went 6-13 with a 4.27 ERA in his first year as a Cub.

On May 19, 2013, Wood became the first Cub since Mordecai Brown to start a season with 9 straight quality starts. On May 30, 2013, Wood hit his first career grand slam off of Jake Peavy in an 8-3 victory over the Chicago White Sox. On July 6, 2013, Wood was named to his first All-Star selection.

Wood has an expansive pitch repertoire, throwing six pitches with regularity. He has three fastballs — a four-seamer at 89–92 mph, a two-seamer at 88–91, and a cutter at 87–90. He also throws two breaking balls — a slider (80–83) and a curveball (71–75) – and, finally, a changeup at 78–81. Wood's pitches to left-handed hitters are most often four-seamers, cutters, and sliders, with an occasional curveball. To right-handers, he throws the four-seamer, two-seamer, cutter, and changeup.[5]