From Infogalactic: the planetary knowledge core
Jump to: navigation, search
For other uses, see Treasury (disambiguation). 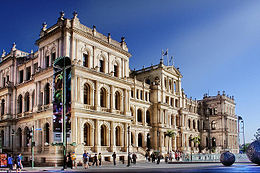 The Treasury Building of Brisbane

A treasury is either

The head of a treasury is typically known as a treasurer. This position may not necessarily have the final control over the actions of the treasury, particularly if they are not an elected representative.

File:Treasury big2.jpg
The Treasury of Athens at Delphi, built with the spoils of the Battle of Marathon

...And there was also silver weighing many thousands of talents and all the royal treasure amounting to a very great sum...

The term treasury was first used in Classical times to describe the votive buildings erected to house gifts to the gods, such as the Siphnian Treasury in Delphi or many similar buildings erected in Olympia, Greece by competing city-states to impress others during the ancient Olympic Games. In Ancient Greece treasuries were almost always physically incorporated within religious buildings such as temples, thus making state funds sacrosanct and adding moral constraints to the penal ones to those who would have access to these funds.

The sovereigns' treasury within the palace in ancient Jerusalem, is considered to be similar in nature to the temple treasury.[13] The temple treasury of the settlement had appointed officials and functioned akin to a bank.[14]

... in fact, practically in every city there are banking places for the holy money ...

In excavations of Persopolis a text containing information pertaining to the activities of a temple treasury were discovered dated to the fifth century BC. The texts written in the Elamite language name the treasurer as ganzabara [16][17][18]

The ancient Roman word aerarium signified the treasury of the Senate, fiscus was used to indicate the imperial treasury used by Caesar.[19] [20]

In the United Kingdom, Her Majesty's Treasury is overseen by the Chancellor of the Exchequer. The traditional honorary title of First Lord of the Treasury is held by the Prime Minister. Her Majesty's Revenue and Customs administers the taxation system.

In many other countries, the treasury is called the "ministry of finance" and the head is known as the finance minister. Examples include Bangladesh, Belgium, Spain, Italy, New Zealand, Canada, Malaysia, Singapore, India, Japan, the Netherlands, and Pakistan.

In some other countries, a "Treasury" will exist alongside a separate "Ministry of Finance", with divided functions.

In the Australian federal government a treasurer and a finance minister co-exist. The Department of the Treasury is responsible for drafting the government budget, economic policy (except monetary policy), some market regulation and revenue policy (which is administered by the Australian Taxation Office). The Finance Minister, who manages the Department of Finance and Deregulation, is responsible for budget management, government expenditure and market deregulation.

In a text known as the gnostic bible, dated some-what uncertainly to centuries about the 4th BC, the Pistis Sophia apparently describes treasuries of punishment, of which there are twelve.[21][22][23][24]