The Treaty of Alcáçovas (also known as Treaty or Peace of Alcáçovas-Toledo) was signed on 4 September 1479 between the Catholic Monarchs of Castile and Aragon on one side and Afonso V and his son, Prince John of Portugal, on the other side. It put an end to the War of the Castilian Succession, which ended with a victory of the Catholic Monarchs on land[1] and a Portuguese victory on the sea.[2] [1] The four peace treaties signed at Alcáçovas reflected that outcome: Isabella was recognized as Queen of Castile while Portugal reached hegemony in the Atlantic Ocean.

The treaty intended to regulate:

War of the Castilian Succession

Ferdinand and Isabella
See also: Battle of Toro, Battle of Guinea, and War of the Castilian Succession

After Henry’s IV death (1474),the Castilian crown was disputed between the half-sister of the king, Isabella I of Castile, married to Prince Ferdinand II of Aragon, and the king’s daughter, Juana de Trastámara, popularly known as la Beltraneja - because her father was alleged to be Beltrán de la Cueva. In the subsequent civil war, Afonso V of Portugal married Juana and invaded Castile (May 1475), defending her rights.[3]

Parallel to the dynastic struggle, there was a fierce naval war between the fleets of Portugal and Castile to access and control overseas territories − especially Guinea - whose gold and slaves were the heart of the Portuguese power. The main events of this war were the indecisive[4][5] battle of Toro (1 March 1476), transformed[6] in a political victory by the Catholic Monarchs and the battle of Guinea[7] (1478), which granted Portugal the hegemony in the Atlantic Ocean and disputed territories.

Historian Stephen R. Bown: “(...) When Ferdinand an Isabella secured their rule after the Battle of Toro 1 march 1476- effectively eliminating the threat of Portuguese invasion but not officially ending the war- they renewed the twenty-year-old Castilian claim to their "ancient and exclusive" rights to the Canary Islands and the Guinea coast (...). They encouraged Spanish merchant ships to take advantage of the political disruption and considered making direct attacks on Portuguese vessels returning from Guinea, with the objective of seizing the monopoly. (...) In 1478 a Spanish fleet of thirty-five caravels was intercepted by an armed Portuguese squadron. Most of the fleet was captured and taken to Lisbon [with a huge amount of Gold plus all the garrison, arms and tripulation]. (...) in 1479, (...) the two nations concluded terms for peace with the treaty of Alcáçovas, ending the struggle for the succession as well as their battle at sea.”[8] 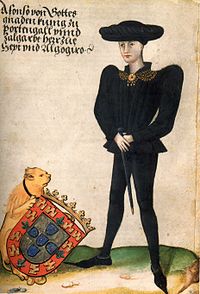 This treaty, ratified later by the Papal bull Aeterni regis in 1481, essentially gave the Portuguese free rein to continue their exploration along the African coast while guaranteeing Castilian sovereignty in the Canaries. It also prohibited Castilians from sailing to the Portuguese possessions without Portuguese licence. The Treaty of Alcáçovas, establishing Castilian and Portuguese spheres of control in the Atlantic, settled a period of open hostility, but it also laid the basis for future claims and conflict.

Portugal's rival Castile had been somewhat slower than its neighbour to begin exploring the Atlantic, and it was not until late in the fifteenth century that Castilian sailors began to compete with their Iberian neighbours. The first contest was for control of the Canary Islands, which Castile won. It was not until the union of Aragon and Castile and the completion of the Reconquista that the larger country became fully committed to looking for new trade routes and colonies overseas. In 1492, the joint rulers of the country decided to fund Christopher Columbus' expedition that they hoped would bypass Portugal's lock on Africa and the Indian Ocean, and instead, reach Asia by travelling west over the Atlantic.

The Treaty of Alcáçovas can be considered as a landmark in the history of colonialism. It is one of the first international documents formally outlining the principle that European powers are empowered to divide the rest of the world into "spheres of influence" and colonise the territories located within such spheres, and that any indigenous peoples living there need not be asked for their consent. This would remain a generally accepted principle in the ideology and practice of European powers up to the 20th century decolonization. The Treaty of Alcáçovas could be regarded as the ancestor of many later international treaties and instruments based on the same basic principle. These include the 1494 Treaty of Tordesillas, which further codified the positions of Spain and Portugal in world exploration, and the resolutions of the 1884 Conference of Berlin, four centuries later, which in much the same way divided Africa into colonial spheres of influence.