From Infogalactic: the planetary knowledge core
Jump to: navigation, search
For the 1784 treaty, see Treaty of Fort Stanwix (1784).

The Treaty of Fort Stanwix was a treaty between Native Americans and Great Britain, signed in 1768 at Fort Stanwix, in present-day Rome, New York. It was negotiated between Sir William Johnson, his deputy George Croghan, and representatives of the Six Nations (the Iroquois).[1]

The purpose of the conference was to adjust the boundary line between Indian lands and British colonial settlements set forth in the Royal Proclamation of 1763. The British government hoped a new boundary line might bring an end to the rampant frontier violence which had become costly and troublesome. Indians hoped a new, permanent line might hold back British colonial expansion.[2]

The final treaty was signed on November 5 with one signatory for each of the Six Nations and in the presence of representatives from the colonies of New Jersey, Virginia and Pennsylvania as well as Johnson. The Native American nations present received gifts and cash totaling £10,460 7s. 3d. sterling, the highest payment ever made from colonists to American Indians.[3] The treaty established a Line of Property which extended the earlier proclamation line of the Alleghenies (the divide between the Ohio and coastal watersheds), much farther to the west. The line ran near Fort Pitt and followed the Ohio River as far as the Tennessee River, effectively ceding the Kentucky portion of the Colony of Virginia to the British, as well as most of what is now West Virginia.[3] The British had recently confirmed the lands south and west of the Kanawha to the Cherokee by the Treaty of Hard Labour. During the Fort Stanwix proceedings, the British were astonished to learn that the Six Nations still maintained a nominal claim over much of Kentucky, which they wanted to be added into the consideration. In addition, the Shawnee did not agree to this treaty, contesting colonial Virginian settlements between the Alleghenies and Ohio until the 1774 Treaty of Camp Charlotte.

Although the Six Nations of New York had previously recognized English rights southeast of the Ohio River at the 1752 Treaty of Logstown, they continued to claim ownership (by conquest) over all land as far south as the Tennessee River. They had reserved this territory for decades as a hunting ground. They still considered the Tennessee their boundary with the Cherokee and other "Southern" tribes. Although representatives of the Indian nations who occupied these lands, primarily the Shawnee and Lenape, were present at the negotiations in 1768, they were not signatories and had no real role in the Iroquois' sale of their homeland. The Iroquois hoped that by releasing Ohio lands, they could take pressure off their own home territories in the New York and Pennsylvania areas. Rather than secure peace, the Fort Stanwix treaty helped set the stage for the next round of hostilities between Native Americans and British colonists along the Ohio River, which would culminate in Dunmore's War.

The treaty also settled land claims between the Six Nations and the Penn family, the proprietors of Pennsylvania, where the lands acquired in 1768 were called the "New Purchase." Due to disputes about the physical boundaries of the settlement, however, the final treaty line would not be fully agreed upon for another five years. 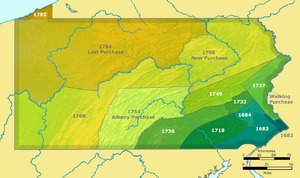 Map showing the "New Purchase" of 1768 in Pennsylvania

The final portion of the Line of Property in Pennsylvania, called the Purchase line in that State, was fixed in 1773 by representatives from the Six Nations and Pennsylvania who met at a spot called Canoe Place at the confluence of West Branch of the Susquehanna River and Cush Cushion Creek in what is now Cherry Tree, Pennsylvania.

The press of British colonial population growth and economic development turned the attention of investors and land speculators to the area west of the Appalachians. In response to demands by settlers and speculators, British authorities sought cessions by the Iroquois and Cherokee for land in Indian country. The Treaty of Lochaber with the Cherokee followed in 1770, adjusting boundaries established in the Treaty of Hard Labour, whereby the Cherokee withdrew their claim to part of the same country, encompassing the south part of present-day West Virginia. At one time, historians believed that the Treaty of Fort Stanwix was an example of Native Americans being forced to accept unreasonable cessions, out of weakness. But, since the late 20th century, historians have credited the Iroquois with high-level strategic thinking in terms of giving up little-used lands in order to deflect English settlement away from their own, more valuable homeland.