The Treaty of Louviers was a peace agreement signed between King Richard I of England and King Philip II of France in the early part of January 1196 concerning, among other things, the manors of Andeli and Louviers that at the time were parcels of land of significance in Normandy. It aimed to settle the claims the Angevin kings of England had on French lands and, at least temporarily, to end the quarreling over the Duchy of Normandy.[1]

Richard was a son of King Henry II of England when he took possession of his father's land in Normandy, France, in 1186 under the protection of the King of France. This was in defiance of his father's wishes. He justified his disregard of his father on loyalty to the Church. After his father's death in 1189 he inherited the title of feudal Duke of Normandy. Philip II was King of France at the time and there was much friction between them, especially over the manor of Andeli that lay near their mutual border in Upper Normandy.[2]

There was an initial agreement of the peace of Louviers in negotiations in December 1195. In January 1196 Archbishop Walter finalized the Treaty of Louviers,[3] whereby the unfortified manor of Andeli in Normandy, desired by both kings,[4] was not to be fortified in any way by either of them.[5] It was to be outside the control of either by belonging to the church of Rouen and was classified as an ecclesia extravagans, meaning it was neutral ecclesiastical ground controlled by the archbishop.[6]

The manor of Andeli is located in present-day Upper Normandy alongside the River Seine. It included the town of Les Andelys. The manor property at the time of the treaty was on the frontier of Normandy, bordering onto the French royal demesne.[4] It was owned by the church of Rouen in the early 1190s. Archbishop Walter de Coutances built a toll house on the Isle of Andeli in the Seine, which was used to collect fees from ships that traveled up and down the river. The manor was an important income property for the diocese, as their other properties had been badly damaged by the ravages of war and were not of much value.[6]

The treaty concerned the territories of Turenne, Berry, Auvergne, Périgord, Angoumois, Toulouse, and Normandy.[7] The agreement included the seaport of Dieppe, the manor of Bouteilles, the manor of Louviers itself, and the forest timber rights to Alihermont and Bort.[8] These were valuable properties of substantial incomes.[8]

Archbishop Walter was out of the territory in Rome soon after the treaty had been negotiated. King Richard went to the Isle of Andeli in March 1196 to negotiate the purchase of the manor from the church.[9] Richard went back again in April, May, and June to continue these negotiations. He offered much to the church to no avail since the property was their main source of income and they wished to keep it. Meanwhile King Philip took the territory of Aumale in Normandy near the manor in the first part of July. In addition Philip had nearby castles at Vernon and Gaillon,[10] which Richard claimed violated the Treaty of Louviers.[11] This made Richard nervous about the potential loss of the duchy of Normandy that he had title to. The archbishop and church were stubborn and refused to sell the manor of Andeli, so then Richard took the manor by force and started the construction of a defense castle at the high point of the territory at a hilltop called the Rock of Andeli.[6] 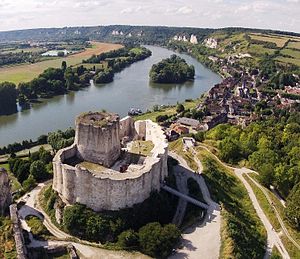 Archbishop Walter objected to the new castle project on his land, but Richard ignored him. The archbishop eventually then in November 1196 set out for a journey to Rome to see the pope about this illegal action. Hearing about this, Richard then sent his own embassy to Rome to represent him. In the meantime Richard built a palace on the Isle of Andeli which became his favorite residence. Richard also made a new town opposite the island later called Petit Andelys. Behind the town there was a 300-foot limestone cliff that rose to the top of Rock of Andeli. Here Richard was constructing his new 'fair castle of the Rock', otherwise known as his 'saucy castle'.[12] He personally supervised the entire construction project, which included a stockade across the river to restrict traffic flow up and down the river.[13] The skilled workmen lived in town and consisted of masons, stone workers, carpenters, miners, quarrymen, lime-workers, smiths, hodmen, water carriers, soldiers to guard the castle, carters, and diggers who cut the castle moat.[12]

Pope Celestine III in April 1197 sent archbishop Walter and his embassy back to Normandy to finalize a settlement that had been negotiated with Richard's representatives.[12] Archbishop Walter in disgust retired to Cambrai. The terms of the treaty of Andeli stated that if the archbishop laid an interdict on either of the kings' dioceses they could confiscate the revenues of the manor until a settlement could be arranged by a tribunal of deacons from the kings. Archbishop Walter later decided he didn't like this arrangement placed upon his authority and placed an interdict upon King Philip's lands when he retired. Philip rebelled and seized the manor. Much quarreling then went on between King Philip and King Richard. Negotiations commenced for a settlement between them, since King Richard had Chateau Gaillard in the works in the middle of the manor land. The pope and some cardinals were mediators between King Richard and the church of Rouen.[14] Archbishop Walter ultimately deeded over the manor to King Richard in October 1197.[15] He then continued with his castle and finished it a year later in 1198. Richard died on 6 April 1199, ending a 40-month truce.[8]