From Infogalactic: the planetary knowledge core
Jump to: navigation, search
For other treaties of Paris, see Treaty of Paris (disambiguation).

The Treaty of Paris, signed in Paris by representatives of King George III of Great Britain and representatives of the United States of America on September 3, 1783, ended the American Revolutionary War. This treaty, along with the separate peace treaties between Great Britain and the nations that supported the American cause—France, Spain and the Dutch Republic—are known collectively as the Peace of Paris.[2][3] Its territorial provisions were "exceedingly generous" to the United States in terms of enlarged boundaries.[4] 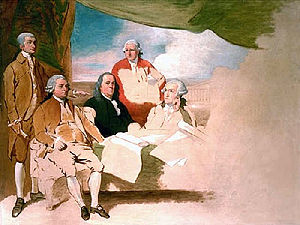 Benjamin West's painting of the delegations at the Treaty of Paris: John Jay, John Adams, Benjamin Franklin, Henry Laurens, and William Temple Franklin. The British delegation refused to pose, and the painting was never completed.

Peace negotiations began in April 1782, and continued through the summer. Representing the United States were Benjamin Franklin, John Jay, Henry Laurens, and John Adams. David Hartley and Richard Oswald represented Great Britain. The treaty was signed at the Hotel d'York (presently 56 Rue Jacob) in Paris on September 3, 1783, by Adams, Franklin, Jay, and Hartley.[5]

Regarding the American Treaty, the key episodes came in September, 1782, when the French Foreign Minister Vergennes proposed a solution that was strongly opposed by his ally the United States. France was exhausted by the war, and everyone wanted peace except Spain, which insisted on continuing the war until it captured Gibraltar from the British. Vergennes came up with the deal that Spain would accept instead of Gibraltar. The United States would gain its independence but be confined to the area east of the Appalachian Mountains. Britain would take the area north of the Ohio River. In the area south of that would be set up an independent Indian state under Spanish control. It would be an Indian barrier state.

The Americans realized that French friendship was worthless during these negotiations: they could get a better deal directly from London. John Jay promptly told the British that he was willing to negotiate directly with them, cutting off France and Spain. The British Prime Minister Lord Shelburne agreed. He was in full charge of the British negotiations and he now saw a chance to split the United States away from France and make the new country a valuable economic partner.[6] The western terms were that the United States would gain all of the area east of the Mississippi River, north of Florida, and south of Canada. The northern boundary would be almost the same as today.[7] The United States would gain fishing rights off Canadian coasts, and agreed to allow British merchants and Loyalists to try to recover their property. It was a highly favorable treaty for the United States, and deliberately so from the British point of view. Prime Minister Shelburne foresaw highly profitable two-way trade between Britain and the rapidly growing United States, as indeed came to pass.[8]

Great Britain also signed separate agreements with France and Spain, and (provisionally) with the Netherlands.[9] In the treaty with Spain, the territories of East and West Florida were ceded to Spain (without a clear northern boundary, resulting in a territorial dispute resolved by the Treaty of Madrid in 1795). Spain also received the island of Minorca; the Bahama Islands, Grenada, and Montserrat, captured by the French and Spanish, were returned to Britain. The treaty with France was mostly about exchanges of captured territory (France's only net gains were the island of Tobago, and Senegal in Africa), but also reinforced earlier treaties, guaranteeing fishing rights off Newfoundland. Dutch possessions in the East Indies, captured in 1781, were returned by Britain to the Netherlands in exchange for trading privileges in the Dutch East Indies, by a treaty which was not finalized until 1784.[10]

The United States Congress of the Confederation ratified the Treaty of Paris on January 14, 1784. Copies were sent back to Europe for ratification by the other parties involved, the first reaching France in March 1784. British ratification occurred on April 9, 1784, and the ratified versions were exchanged in Paris on May 12, 1784. 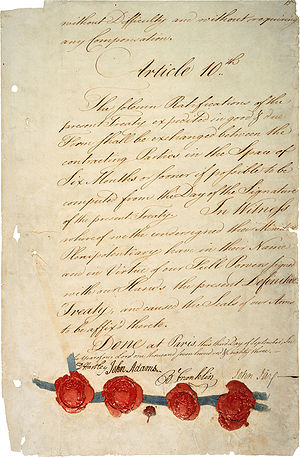 Last page of the Treaty of Paris

Preamble. Declares the treaty to be "in the name of the most holy and undivided Trinity", states the bona fides of the signatories, and declares the intention of both parties to "forget all past misunderstandings and differences" and "secure to both perpetual peace and harmony".

Eschatocol. "Done at Paris, this third day of September in the year of our Lord, one thousand seven hundred and eighty-three."

Historians have often commented that the treaty was very generous to the United States in terms of greatly enlarged boundaries. Historians such as Alvord, Harlow, and Ritcheson have emphasized that British generosity was based on a statesmanlike vision of close economic ties between Britain and the United States. The concession of the vast trans-Appalachian region was designed to facilitate the growth of the American population and create lucrative markets for British merchants, without any military or administrative costs to Britain.[12] The point was the United States would become a major trading partner. As the French foreign minister Vergennes later put it, "The English buy peace rather than make it".[13]

Privileges that the Americans had received from Britain automatically when they had colonial status (including protection from pirates in the Mediterranean Sea; see: the First Barbary War and the Second Barbary War) were withdrawn. Individual states ignored federal recommendations, under Article 5, to restore confiscated Loyalist property, and also ignored Article 6 (e.g., by confiscating Loyalist property for "unpaid debts"). Some, notably Virginia, also defied Article 4 and maintained laws against payment of debts to British creditors. The British often ignored the provision of Article 7 about removal of slaves.[14]

The actual geography of North America turned out not to match the details used in the treaty. The Treaty specified a southern boundary for the United States, but the separate Anglo-Spanish agreement did not specify a northern boundary for Florida, and the Spanish government assumed that the boundary was the same as in the 1763 agreement by which they had first given their territory in Florida to Britain. While that West Florida Controversy continued, Spain used its new control of Florida to block American access to the Mississippi, in defiance of Article 8.[15]

In the Great Lakes region, Great Britain violated the treaty stipulation that they should relinquish control of forts in United States territory "with all convenient speed." British troops remained stationed at a number of forts (Detroit, Lernoult, Michilimackinac, Niagara, Ontario, Oswegatchie, Presque Isle) for over a decade. The British also built an additional fort (Miami) during this time. They found justification for these actions in the unstable and extremely tense situation that existed in the area following the war, in the failure of the United States government to fulfill commitments made to compensate loyalists for their losses, and in the British need for time to liquidate various assets in the region.[16] This matter was finally settled by the 1794 Jay Treaty.