The Treaty of Troyes was an agreement that King Henry V of England and his heirs would inherit the throne of France upon the death of King Charles VI of France. It was signed in the French city of Troyes on 21 May 1420 in the aftermath of Henry's successful military campaign in France. It forms a part of the backdrop of the latter phase of the Hundred Years' War finally won by the French at the Battle of Castillon in 1453, and in which various English kings tried to establish their claims to the French throne. 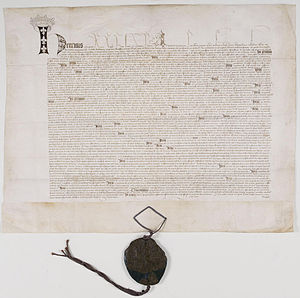 The treaty arranged for the marriage of Charles VI's daughter Catherine of Valois to Henry V, who was made regent of France and acknowledged (along with his future sons) as successor to the French throne. The Dauphin Charles VII of France was disinherited from the succession. The Estates-General of France ratified the agreement later that year after Henry V entered Paris. (See main article:The Dual-Monarchy of England and France)

The French king Charles VI suffered bouts of insanity through much of his reign. Henry V had invaded France in 1415 and delivered a crushing defeat to the French at Agincourt. In 1418, John the Fearless, Duke of Burgundy, whose political and economic interests favoured an agreement with the English, occupied Paris. One year later he was murdered by his Armagnac opponents on the bridge at Montereau. His son Philip the Good formed an alliance with the English and negotiated the treaty with the English King.

Isabeau of Bavaria, Charles VI's queen, whose participation in the negotiations was merely formal, agreed to the treaty disinheriting her son, hoping that if the dynasties were joined through Henry V the war could be ended and leave France in the hands of a vigorous and able king.

The disinheriting of the Dauphin was supported by earlier rumours that the Queen had an affair with her brother-in-law Louis, Duke of Orléans. These rumours were gladly taken up by Louis' main rival, John the Fearless, who had had the Duke of Orléans assassinated in 1407.

Charles' disinheritance received further legal sanction after he declared himself regent for Charles VI in rivalry to the regency declared by Henry V. The Dauphin was summoned to a lit-de justice (legal hearing) in 1420 on charges of lèse-majesté. When he failed to appear, a Parisian court in 1421 found Charles the Dauphin guilty of treason and sentenced him to disinheritance and banishment from the Kingdom of France, losing all privileges to land and titles.

The treaty was undermined by the deaths of both Charles VI and Henry V within two months of each other in 1422. The infant Henry VI of England became King of both England and France, but the Dauphin Charles also claimed the throne of France upon the death of his father. Crowned King of France, Charles VII, on 17 July 1429 in Reims Cathedral, he ruled only a region of France centred on Bourges and was derisively referred to as the "King of Bourges" by his opponents.

The terms of the Treaty of Troyes were later confirmed once again at the Treaty of Amiens (1423), when Burgundy and Brittany confirmed the recognition of Henry VI as King of France and agreed to form a triple-defensive alliance against the Dauphin Charles. However, in 1435, Charles signed the Treaty of Arras with the Burgundians, in which they recognized and endorsed his claims to the throne.

The military victory of Charles VII over both the French and English supporters of the claims of Henry VI to be king of France rendered the treaty moot. The kings of England continued to claim the crown of France until the Act of Union in 1800/1801 merged the Kingdoms of Great Britain and Ireland.