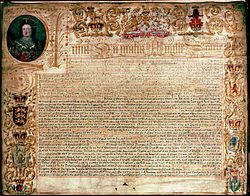 The Treaty of Union. 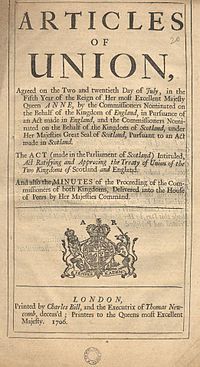 The published Articles of Union.

The Treaty of Union is the name given to the agreement that led to the creation of Great Britain,[1][2][3][4] the political union of the Kingdom of England (which included Wales) and the Kingdom of Scotland, which took effect on 1 May 1707. The details of the Treaty were agreed on 22 July 1706, and separate Acts of Union were then passed by the parliaments of England and Scotland to ratify the Treaty.

Queen Elizabeth I of England (and of Ireland) died without issue on 24 March 1603, dissolving the Tudor dynasty. The throne fell immediately and uncontroversially to her double first cousin twice removed, King James VI of Scotland, a member of House of Stuart and son of Mary, Queen of Scots. He assumed the throne of the Kingdom of England and the Kingdom of Ireland as King James I in the Union of the Crowns in 1603. This personal union somewhat assuaged constant English fears of Scottish cooperation with France, especially in a hypothetical French invasion of Britain.

After that personal union, people widely discussed the idea of uniting the Kingdom of Scotland and the Kingdom of England. Nevertheless, Acts of Parliament attempting to unite the two countries failed in 1606, in 1667, and in 1689.

The Company of Scotland received an investment equal to one-quarter of all money circulating in the Kingdom of Scotland and sponsored the Darien scheme, an ill-fated attempt to establish a Scottish trading colony in the Isthmus of Panama. The colonisation began in 1698 and ended in a military confrontation with the Spanish in 1700; however, most colonists died of tropical diseases.

In the face of opposition by English commercial interests, the Company of Scotland raised subscriptions in Amsterdam, Hamburg and London for the scheme.For his part, King William III had given only lukewarm support to the whole Scottish colonial endeavour. England was at war with France and hence did not want to offend Spain, which claimed the territory as part of New Granada.

England was also under pressure from the London-based East India Company, who were keen to maintain their monopoly over English foreign trade. It therefore forced the English and Dutch investors to withdraw. Next, the East India Company threatened legal action on the grounds that the Scots had no authority from the king to raise funds outside the English realm, and obliged the promoters to refund subscriptions to the Hamburg investors. This left no source of finance but Scotland itself. This economic disaster for the investing Scottish elites diminished the resistance of the Scottish political establishment (i.e. the nobility) to the idea of political union with England.

The Scottish nobility ultimately supported the union despite some popular opposition and anti-union riots in Edinburgh, Glasgow, and elsewhere.[5][6][7]

Deeper political integration had been a key policy of Queen Anne ever since she acceded to the throne in 1702. Under the aegis of the Queen and her ministers in both kingdoms, the parliaments of England and Scotland agreed to participate in fresh negotiations for a union treaty in 1705.

Of the 31 Scottish commissioners who were appointed, 29 were members of the government Court Party and one was a member of the Squadron Volante. At the head of the list was Queensberry, and the Lord Chancellor of Scotland, the Earl of Seafield.[8] George Lockhart of Carnwath, a member of the opposition Cavalier Party, was the only commissioner opposed to union. The 31 English commissioners, including government ministers and officers of state, such as the Lord High Treasurer, the Earl of Godolphin, the Lord Keeper, Baron Cowper, and a large number of Whigs who supported union. Tories were not in favour of union and only one was represented among the commissioners.

Negotiations between the English and Scottish commissioners began on 16 April 1706 at the Cockpit in London. The sessions opened with speeches from William Cowper, the English Lord Keeper, and Lord Seafield, the Scottish Lord Chancellor, each describing the significance of the task. The commissioners did not carry out their negotiations face to face, but in separate rooms. They communicated their proposals and counter-proposals to each other in writing and there was a blackout on news from the negotiations. Each side had its own particular concerns. Within a few days, England gained a guarantee that the Hanoverian dynasty would succeed Queen Anne to the Scottish crown, and Scotland received a guarantee of access to colonial markets, in the hope that they would be placed on an equal footing in terms of trade.[9]

After the negotiations ended on 22 July 1706, the acts had to be ratified by both Parliaments. Scottish proponents of union believed that failure to agree to the treaty would result in the imposition of union under less favourable terms, and English troops were stationed just south of the border and in Ireland as an "encouragement". Months of fierce debate in both capital cities and throughout both kingdoms followed. In Scotland, the debate on occasion dissolved into civil disorder, most notably by the notorious 'Edinburgh Mob'. The prospect of a union of the kingdoms was deeply unpopular among the Scottish population at large, and talk of an uprising was widespread.[10] However the Treaty was signed and the documents were rushed south with a large military escort.

The united Kingdom of Great Britain was born on 1 May 1707, shortly after the parliaments of Scotland and England had ratified the Treaty of Union by each approving Acts of Union combining the two parliaments and the two royal titles. Scotland's crown, sceptre, and sword of state remained at Edinburgh Castle. Queen Anne (already Queen of both England and Scotland) formally became the first occupant of the unified British throne, with Scotland sending forty-five Members to the new House of Commons of Great Britain, as well as representative peers to the House of Lords.

Significant financial payoffs to Scottish parliamentarians were later referred to by Robert Burns when he wrote "We're bought and sold for English gold, Such a Parcel of Rogues in a Nation!"[11] Some recent historians, however, have emphasized the legitimacy of the vote.[12]

Details of the Treaty

The Treaty consisted of 25 articles.[13]

Article 1 states "That the Two Kingdoms of Scotland and England, shall upon the 1st May next ensuing the date hereof, and forever after, be United into One Kingdom by the Name of GREAT BRITAIN."

Article 2 provided for the succession of the House of Hanover, and for Protestant succession as set out in the English Act of Settlement.

Article 3 provide for the creation of the one, unified, parliament of Great Britain.

Article 4 gave subjects of Great Britain freedom of trade and navigation within the kingdom and "the Dominions and Plantations thereunto belonging".

Articles 5 to 15, 17 & 18 dealt with aspects of trade, movement, taxes, regulation etc., to ensure equal treatment for all subjects of the new kingdom.

Article 16 required the introduction of a common currency for Great Britain, subsequently effected through the 1707–1710 Scottish recoinage.

Article 19 provided for the continuation of Scotland's separate legal system.

Article 21 provided for the protection of the rights of royal burghs.

Article 22 provided for Scotland to be represented in the new Parliament of Great Britain by 16 Lords and 45 MPs.

Article 23 provided for Scotland's peers to have the same rights as English peers in any trial of peers.

Article 24 provided for the creation of a new Great Seal for Great Britain, different from those of England and Scotland, but also provided that the English Great Seal could be used until this had been created.

Article 25 provided that all laws of either kingdom that may be inconsistent with the Articles in the Treaty are to be declared void.

The following commissioners were appointed to negotiate the Treaty of Union: