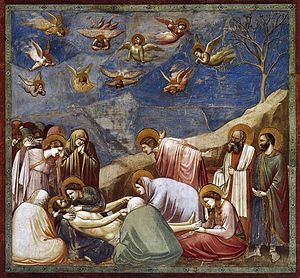 The Trecento (Italian pronunciation: [treˈtʃɛnto]; Italian for 300, short for "mille trecento," 1300) refers to the 14th century in Italian cultural history.[1]

Commonly the Trecento is considered to be the beginning of the Renaissance in art history. Painters of the Trecento included Giotto di Bondone, as well as painters of the Sienese School, which became the most important in Italy during the century, including Duccio di Buoninsegna, Simone Martini, Lippo Memmi, Ambrogio Lorenzetti and his brother Pietro. Important sculptors included two pupils of Giovanni Pisano: Arnolfo di Cambio and Tino di Camaino, and Bonino da Campione.

The Trecento was also famous as a time of heightened literary activity, with writers working in the vernacular instead of Latin. Dante, Petrarch and Boccaccio were the leading writers of the age. Dante produced his famous La divina commedia (The Divine Comedy), a summation of the medieval worldview, and Petrarch wrote verse in a lyrical style influenced by the Provençal poetry of the troubadours.

In music, the Trecento was a time of vigorous activity in Italy, as it was in France, with which there was a frequent interchange of musicians and influences. Distinguishing the period from the preceding century was an emphasis on secular song, especially love lyrics; much of the surviving music is polyphonic, but the influence of the troubadours who came to Italy, fleeing the Albigensian Crusade in the early 13th century, is evident. In contrast to the artistic and literary achievements of the century, Trecento music (at least in written form) flourished in the second half of the century, and the period is often extended (especially in English-language scholarship) into the first decades of the 15th century, as a so-called "Long Trecento." Musicians and composers of the Trecento included the renowned Francesco Landini, as well as Maestro Piero, Gherardello da Firenze, Jacopo da Bologna, Giovanni da Cascia, Paolo "Tenorista" da Firenze, Niccolò da Perugia, Bartolino da Padova, Antonio Zachara da Teramo, Matteo da Perugia, and Johannes Ciconia.

Media related to 14th-century in Italy at Wikimedia Commons