Trenitalia is the primary train operator in Italy. Trenitalia is owned by Ferrovie dello Stato Italiane, itself owned by the Italian Government. It was created in the year 2000 following the EU directive on the deregulation of rail transport even if the company privatisation was only formal because the Italian government owns it for 100%.

The Italian government formed Trenitalia to comply with European regulations. The European Commission's First Railway Directive from 1991 (91/440/EC) prohibited that the same railway company manage the rail infrastructure and provide rail transportation. On 1 June 2000, therefore, Italy created Trenitalia as the primary rail transportation company and on 1 July 2001 established Rete Ferroviaria Italiana (RFI) as the company overseeing the rail network.[3] However, the separation was only formal, since both are subsidiaries of the Ferrovie dello Stato Italiane holding and are owned wholly by the government.[4]

The company operates both regional and long-distance trains.

"Validation" in this case means placing a date/time stamp on the ticket by inserting into a (usually) yellow box either in the station or along the track. This is done because regional tickets are not for a particular date or time but are valid for some months - the date/time stamp is to show that the ticket cannot be reused.

There are no discount schemes available for non-residents (of Italy) on regional trains. 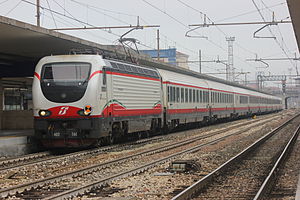 Long-distance trains are of mainly of two types: the Frecce (arrows) and Intercity trains.

Intercity trains also serve medium-sized cities besides the big cities, thus are generally slower but are cheaper than the Frecce.

Night trains (Intercity night) operate mainly between north and south of Italy and between Italy and its neighbouring countries and are comparable to Intercity level.

High-speed rail (managed by RFI) service in Italy commenced in 2008 with about 1,000 km (620 mi) of new track on the Turin-Milan-Bologna-Rome-Naples-Salerno route that allow trains to reach speeds over 360 km/h (220 mph), although current maximum commercial speed is 300 km/h (190 mph). There are currently four generations of ElettroTreno in service on the network.

Trenitalia ordered 50 high speed trainsets in 2010.[6] New trains will be ETR 1000 series.[7] They will be 200 metres (660 ft) long, non-articulated trains, with distributed traction, and capable of up to 400 km/h (250 mph) operation, although current service plans are limited to 360 km/h (220 mph). Mauro Moretti, chief executive of FS group, said FS was considering long-distance international services to France, Germany, or even Spain and the UK.[6] The trains are due to enter service from 2013.[8]

Several types of international trains in Italy are usually marketed by separate units, who set ticket prices and service standards but do not operate the trains.

Artésia was a company 50% owned by Trenitalia and 50% owned by SNCF, operating trains between France and Italy; however, it stopped operating in November 2011.

Tickets can be bought in the stations, at travel agencies, or online. The Trenitalia website (www.trenitalia.com) permits the display of rail solutions as well as the acquisition of tickets. However, the value of getting tickets online varies based on the type of train. There are two types of trains in the national system:[11]

The ItaliaRail website (www.ItaliaRail.com) was developed in cooperation with Trenitalia in 2004 in order to provide an easy to use booking site for non-Italians. Travelers to Italy can book in either USD, GBP, CAD or EUR currencies (AUD is in development). ItaliaRail booking system offers the same discounted fares and special offers available on Trenitalia's website.

On the other hand, 'premium' trains (i.e., long distance, high speed and other trains) are trains that require reservations: all seats must be reserved in advance. While a ticket with reservation will be sold to the buyer at the last minute at the station - if available - Trenitalia also has a variety of discount schemes wherein buyers who acquire tickets in advance may realize substantial savings. For this reason, buying tickets for 'premium' trains online in advance may be advantageous to the buyer.

All 'premium' trains generally share the same discount schemes, even though their fares may differ.[12] In June 2012, Trenitalia discarded the "Mini" discount fare program and introduced three "new" fare classes:[13]

A Trenitalia press release described the new fares in this way: "...three new types of tickets have been introduced to the pricing scheme: Supereconomy, Economy, and Base, with the first two offering different levels of discount with respect to the Base fare. The Base fare guarantees free and unlimited reservation changes up until train departure, while its price in second class and in the Standard level will be cut 5% on all the Frecciarossa and Frecciargento routes running on the High Speed Torino - Salerno line."

These two new discount fares can now be bought up to the moment of departure, if any seats in that fare class are still available. This is a major change from the previous Mini fare that required purchase at least two days in advance.

Trenitalia shows which stations have which type of machine, but it is only in Italian; see this page at the Trenitalia website and click on a region.

Most self-service machines accept currency (bills and coins), and many (but not all) accept "chip-and-pin" cards, which are the standard in Europe. These machines do not accept the magnetic swipe credit and debit cards still common in North America.

Tickets for both "premium" and regional trains in the Trenitalia network are widely sold in travel agencies in Italy, with more than 4,000 points of sale.[15] These agencies will generally have "Trenitalia" or "FS" or "F.S." on their windows, "FS" standing for "Ferrovie dello Stato" (national railways), which is still the mother company of Trenitalia. Also some tabaccherie (tobacconists shops) and news stands sell regional and suburban train tickets particularly those near or in stations and are more commonly sold in smaller stations where there is no ticket desk.

In addition, some travel agencies outside of Italy also sell Trenitalia tickets.[16]

In early 2012, Trenitalia released a web advertisement to promote its change from two classes of train compartments into four classes. Passengers travelling by the fourth, lowest class are not permitted to use the on-board cafeteria or enter the carriages reserved for better-off passengers. This change alone reportedly caused controversy, but more followed with release of the accompanying web advertisement.

The web advertisement showed only white people seated in the upper three classes; and a family of color in the fourth, lowest class, where they are segregated from other passengers on board the train according to the new system.

Italian online media observed this and branded the advertisement as "grotesque", and other complaints of racism discrimination followed in UK newspapers, social media and online. Trenitalia withdrew the web commercial, and quickly substituted it following the allegations of racism.[17][18] Since 13 January 2012 the cafeteria is accessible also for passengers of lower classes.[19]