Trent Park is an English country house, together with its former extensive grounds, in north London. The original great house and a number of statues and other structures located within the grounds (such as the Orangery) are Grade II listed buildings. The site is designated as Metropolitan Green Belt, lies within a conservation area, and is also included within the Register of Parks and Gardens of Special Historic Interest in England.

The house itself until 2012 formed the Trent Park campus of Middlesex University. The campus was home to the performing arts, teacher education, humanities, product design and engineering, television production and biological science departments of the university and the Flood Hazard Research Centre, but was vacated in October 2012.

The parkland extends to some 320 hectares (3.2 km2) and has been known as the Trent Country Park since 1973. There is a sports ground in the park, Southgate Hockey Centre.

Trent Park dates back to the fourteenth century when it was a part of Enfield Chase, one of Henry IV's hunting grounds. In 1777 George III leased the site to Sir Richard Jebb, his favourite doctor, as a reward for saving the life of the King's younger brother, the then Duke of Gloucester. Jebb chose the name Trent, because it was in Trent, Italy, that the King's brother had been saved.[1]

In about 1836 the house was bought by the banker David Bevan for his son Robert Cooper Lee Bevan on his marriage to Lady Agneta Yorke. Robert Bevan built Christ Church, Trent, in 1838 to provide a suitable place of worship for the district. In 1909 the estate was sold to Philip Sassoon (cousin of the poet Siegfried Sassoon), who entertained many notable guests at Trent Park, including Charlie Chaplin and Winston Churchill. 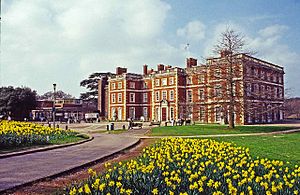 Sir Philip Sassoon had a reputation for being one of the greatest hosts in Britain. Herbert Baker designed one house for him in 1912, Port Lympne, later the Port Lympne Wild Animal Park, in Kent, and Philip Tilden largely rebuilt another at Trent Park, Cockfosters, from 1923. Stylistic differences between the two houses illustrate changes in taste among members of British high society of the period. Trent Park possessed a landscape designed by Humphrey Repton but the existing house was Victorian and undistinguished. Sassoon and his designers turned it into one of the houses of the age, "a dream of another world – the white-coated footmen serving endless courses of rich but delicious food, the Duke of York coming in from golf... Winston Churchill arguing over the teacups with George Bernard Shaw, Lord Balfour dozing in an armchair, Rex Whistler absorbed in his painting... while Philip himself flitted from group to group, an alert, watchful, influential but unobtrusive stage director – all set against a background of mingled luxury, simplicity and informality, brilliantly contrived..."[2] This atmosphere, as Clive Aslet has suggested, represented a complete about-face from Sassoon's earlier extravagance at Port Lympne to what Aslet called "an appreciation of English reserve."[3] In the words of Christopher Hussey, at Trent Sassoon caught "that indefinable and elusive quality, the spirit of a country house... an essence of cool, flowery, chintzy, elegant, unobtrusive rooms that rises in the mind when we are thinking of country houses."[4] 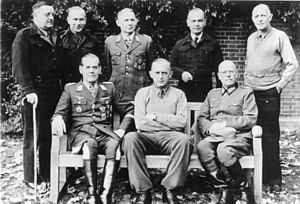 German officers at Trent Park during the Second World War

During the Second World War, Trent Park was used as a means to extract information from captured German officers. During the Battle of Britain in 1940, captured Luftwaffe pilots were held initially at Trent Park. The rooms at Trent Park had been equipped with hidden microphones that allowed the British to listen in to the pilots' conversations. This provided information about the German pilots' views on a number of matters, including the relative strengths and weaknesses of German aircraft.[5]

Later in the war it was used as a special prisoner of war camp (the 'Cockfosters Cage'[6]) for captured German generals and staff officers. They were treated hospitably, provided with special rations of whisky and allowed regular walks on the grounds. The hidden microphones and listening devices allowed the British military (MI19) to gather important information and an intimate insight into the minds of the German military elite. An example of the intelligence gained from Trent Park includes the existence and location of the German rocket development at Peenemünde Army Research Center when General von Thoma discussed what he had seen there. This led to the area being targeted for a heavy bomber attack by the RAF. They also received information about war crimes, political views and a clearer picture of the resistance in Germany that led to the attempt to assassinate Hitler. Eighty-four generals and a number of lower ranking staff officers were brought to Trent Park.

More than 1,300 protocols were written by the time the war ended; a selection of these was published in English in 2007 under the title Tapping Hitler's Generals.[7][8] Selected transcripts were dramatised in the 2008 History Channel 5-part series The Wehrmacht. In the episode The Crimes, General Dietrich von Choltitz is quoted as saying in October 1944: "We all share the guilt. We went along with everything, and we half-took the Nazis seriously, instead of saying 'to hell with you and your stupid nonsense'. I misled my soldiers into believing this rubbish. I feel utterly ashamed of myself. Perhaps we bear even more guilt than these uneducated animals." (This in apparent reference to Hitler and his supporting Nazi Party members.)[9]

The transcripts from Trent Park are also included in the 2011 book Soldaten: On Fighting, Killing, and Dying, The Secret WWII Transcripts of German POWS by historian Sönke Neitzel and social psychologist Harald Welzer. In its review of the book, Der Spiegel reports:

"Many Wehrmacht soldiers became witnesses to the Holocaust because they happened to be present or were invited to take part in a mass shooting. In one cell conversation, army General Edwin Graf von Rothkirch und Trach talks about his time in the Polish town of Kutno:

"I knew an SS leader pretty well, and we talked about this and that, and one day he said: 'Listen, if you ever want to film one of these shootings? …I mean, it doesn't really matter. These people are always shot in the morning. If you're interested, we still have a few left over, and we could also shoot them in the afternoon if you like."

It takes some sense of routine to be able to make such an offer. The fact that the people involved did not try to keep their activities a secret demonstrates how much the perpetrators took for granted the "mass shootings of Jews," as one of the POWs in Trent Park called it." [10] 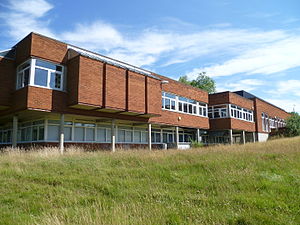 In 1947 the estate became a Ministry of Education emergency training college for male teachers, then in 1950 a residential, co-educational training college.[11] In 1974 Trent Park College of Education became part of Middlesex Polytechnic, which itself became Middlesex University in 1992. The University's Vice-Chancellor was provided with a residence within the park. Though not so grand as the main house, this nevertheless boasted several small private gardens including a rose garden.

In the mid-1990s, Middlesex University and Southgate Sports and Leisure Trust (SSLT) reached agreement to develop the dilapidated university sports ground. In 1997–8 SSLT built a clubhouse and two artificial grass pitches on the site, which was opened in March 1998 as Southgate Hockey Centre. It is home to Southgate Hockey Club, and provides sports and social facilities to the local community. Middlesex University vacated the Trent Park site in October 2012,[12] and in 2013 it was bought by Malaysia’s Allianze University College of Medical Sciences (AUCMS) for £30 million,[13] but the buildings were never developed and the college closed in 2014. The house and grounds were sold to Berkeley Housing Group in September 2015.[14][15] 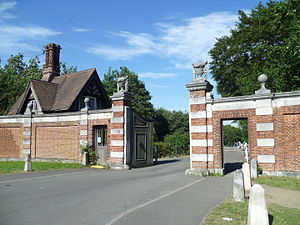 In 1973 Trent Park was opened to the public as a country park, which then surrounded the university buildings and is 320 hectares in area.[16]

The country park includes publicly accessible countryside, farmland, a golf course and an equestrian centre. Some of the grounds were attractively landscaped by Humphry Repton in the English manner (some also attribute the work of Capability Brown). Features of the original landscaping that can still be seen include an impressive avenue of lime trees, an obelisk, ornamental lakes and a water garden. The water garden was renovated by Park Ranger, Arthur Newson in the 1990s.

The park is open to the public and the closest London Underground stations are Oakwood and Cockfosters. During the summer months a number of concerts and festivals take place there. 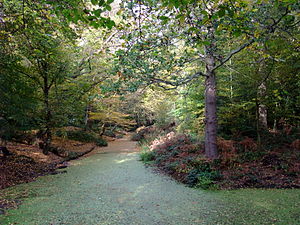 Within the grounds of the country park, close to the Hadley Road entrance, can be found a small moated isle known locally as Camlet Moat. The name has been abbreviated over the years from "Camelot",[17] and it first appeared in local records in 1440.[18]

A survey of the area conducted between 1656 and 1658 attributes the site as the seat of habitation of Geoffrey de Mandeville during the reign of William the Conqueror.[19] In 1429, the lodge was demolished and the materials sold to help pay for repairs to Hertford Castle.[18]

Sir Philip Sassoon conducted excavations in the 1920s and was reported to have found oak beams which formed the basis of a drawbridge, Roman shoes and daggers as well as mosaic tiles depicting a knight mounted on a white horse. The foundations of a large stone building were also found. English Heritage refilled the excavations in 1999.