The gallery's history starts in 1856 when the Moscow merchant Pavel Mikhailovich Tretyakov acquired works by Russian artists of his day with the aim of creating a collection, which might later grow into a museum of national art. In 1892, Tretyakov presented his already famous collection of approximately 2,000 works (1,362 paintings, 526 drawings, and 9 sculptures) to the Russian nation.[1][2]

The façade of the gallery building was designed by the painter Viktor Vasnetsov in a peculiar Russian fairy-tale style. It was built in 1902–04 to the south from the Moscow Kremlin. During the 20th century, the gallery expanded to several neighboring buildings, including the 17th-century church of St. Nicholas in Tolmachi.

The collection contains more than 130,000 exhibits, ranging from Theotokos of Vladimir and Andrei Rublev's Trinity to the monumental Composition VII by Wassily Kandinsky and the Black Square by Kazimir Malevich.

In 1977 the Gallery kept a significant part of the George Costakis collection.

In May 2012, the Tretyakov Art Gallery played host to the prestigious FIDE World Chess Championship between Viswanathan Anand and Boris Gelfand as the organizers felt the event would promote both chess and art at the same time.[3] 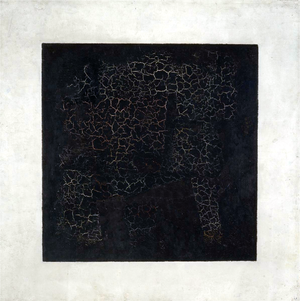 Pavel Tretyakov started collecting art in the middle of 1850. The founding year of the Tretyakov Gallery is considered to be 1856, when Pavel Tretyakov purchased two paintings of Russian artists: "Temptation” by N.G. Schilder and "Skirmish with Finnish Smugglers” by V.G. Kudyakov, although earlier in 1854-1855, he bought 11 graphic sheets and 9 pictures of old Dutch masters. In 1867 the "Moscow City Gallery of Pavel and Sergei Tretyakov" was opened. The Gallery’s collection consisted of 1,276 paintings, 471 sculptures and 10 drawings of Russian artists, as well as 84 paintings by foreign masters.

In August 1892 Pavel presented his art Gallery to the city of Moscow as a gift. In the Gallery’s collection at this time, there were 1,287 paintings and 518 graphic works of the Russian school, 75 paintings and 8 drawings of European schools, 15 sculptures and a collection of icons. The official opening of the museum called the "Moscow City Gallery of Pavel and Sergei Tretyakov." Took place on August 15, 1893.

The Gallery was located in a mansion that the Tretykov family purchased in 1851. As the Tretyakov collection of art grew, the residential part of the mansion filled with art and it became necessary to make additions to the mansion in order to store and display the works of art. The additions to the mansion were made in 1873, 1882, 1885, 1892 and finally in 1902-1904, when there was the famous facade, designed in 1900-1903 by architect V. Bashkirov from the drawings of the artist Viktor Vasnetsov. Construction of the famous façade was managed by the architect A.M. Kalmykov.

In early 1913, the Moscow City Duma elected Igor Grabar as a trustee of the Tretyakov Gallery.

On June 3, 1918, The Tretyakov Gallery was declared owned by Russian Federated Soviet Republic and was named the State Tretyakov Gallery. Igor Grabar was again appointed director of the museum. With Grabar’s active participation in the same year, the State Museum Fund was created, which up until 1927 remained one of the most important sources of replenishment of the Gallery's collection.

In 1926 architect and academician A.V. Shchusev became the director of the Gallery. In the following year the Gallery acquired the neighboring house on Maly Tolmachevsky Lane (the house was the former home of the merchant Sokolikov). After restructuring in 1928, it housed the Gallery administration, academic departments, library, manuscripts department, and the funds and graphics staffs. Later, in 1985-1994, an administrative building was built from the design of architect A.L. Bernstein with 2 floors and height equal to that of the exposition halls.

In 1928 serious renovations were made to the Gallery to provide heating and ventilation. In 1929 electricity was installed.

In 1929 the church St. Nicholas in Tolmachi was closed, and in 1932 the building was given to the Gallery and became a storage facility for paintings and sculptures. Later, the church was connected to the exposition halls and a top floor was built which was specially designed for exhibiting a painting by A.A. Ivanov "The Appearance of Christ to the People" (1837-1857). A transition space was built between rooms located on either side of the main staircase. This ensured the continuity of the view of exposure. The Gallery began to develop a new concept of accommodating exhibits.

In 1936, a new two floor building was constructed which is located on the north side of the main building – it is known as the "Schusevsky” building. These halls were first used for exhibitions, and since 1940 have been included in the main route of exposure.

From the first days of the Great War, the Gallery personnel began dismantling the exhibition - as well as those of other museums in Moscow, in preparation for evacuating during time of war. Paintings were rolled on wooden shafts, covered with tissue paper, placed in boxes, and sheathed with waterproof material. In the middle of the summer of 1941 the train of 17 wagons traveled from Moscow and brought the collection to Novosibirsk. The Gallery was not reopened in Moscow until May 17, 1945 upon the conclusion of the Great War.

In 1956, in honor of the 100th anniversary of the Tretyakov Gallery, the Alexander Ivanov Hall was completed.

From 1980-1992, the director of the Tretyakov Gallery was Y.K. Korolev. Because of the increased number of visitors, Korolev was actively engaged in expanding the area of exposition. In 1983, construction work began to expand the Gallery. In 1985 the Depository - a repository of works of art and restoration workshops – was commissioned. In 1986 renovations began on the main building of the Tretyakov Gallery. The architects I.M. Vinogradsky, G.V. Astafev, B.A. Klimov and others were retained to perform this project. In 1989, on the south side of the main building, a new building was designed and constructed to house a conference hall, a computer and information center, children's studio and exhibition halls. The building was named the "Corps of Engineers", because it housed engineering systems and services. 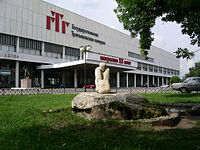 In 1985, the Tretyakov Gallery was administratively merged with a gallery of contemporary art, housed in a large modern building along the Garden Ring, immediately south of the Crimean Bridge. The grounds of this branch of the museum contain a collection of Socialist Realism sculpture, including such highlights as Yevgeny Vuchetich's iconic statue of "Iron Felix" (which was removed from Lubyanka Square in 1991), the "Swords Into Plowshares" sculpture representing a nude worker forging a plough out of a sword, and the "Young Russia" monument. Nearby is Zurab Tsereteli's 86-metre-tall statue of Peter the Great, one of the tallest outdoor statues in the world.

Near the Gallery of modern art there is a sculpture garden called "the graveyard of fallen monuments" that displays statues of former Soviet Union that were relocated.

There are certain plans to demolish the gallery constructed in the late Soviet modernism style, though the public opinion is strongly against them.[4][5]