From Infogalactic: the planetary knowledge core
Jump to: navigation, search
File:Triangle trade2.png
Depiction of the classical model of the Triangular trade 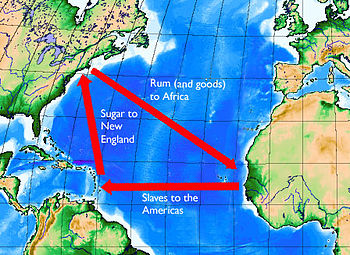 Depiction of the Triangular Trade of slaves, sugar, and rum with New England instead of Europe as the third corner

Triangular trade or triangle trade is a historical term indicating trade among three ports or regions. Triangular trade usually evolves when a region has export commodities that are not required in the region from which its major imports come. Triangular trade thus provides a method for rectifying trade imbalances between the above regions.

The particular routes were historically also shaped by the powerful influence of winds and currents during the age of sail. For example, from the main trading nations of Western Europe it was much easier to sail westwards after first going south of 30 N latitude and reaching the so-called "trade winds"; thus arriving in the Caribbean rather than going straight west to the North American mainland. Returning from North America, it is easiest to follow the Gulf Stream in a northeasterly direction using the westerlies. A similar triangle to this, called the volta do mar was already being used by the Portuguese, before Christopher Columbus' voyage, to sail to the Canary Islands and the Azores. Columbus simply expanded the triangle outwards, and his route became the main way for Europeans to reach, and return from, the Americas.

The best-known triangular trading system is the transatlantic slave trade, that operated from the late 16th to early 19th centuries, carrying slaves, cash crops, and manufactured goods between West Africa, Caribbean or American colonies and the European colonial powers, with the northern colonies of British North America, especially New England, sometimes taking over the role of Europe.[1] The use of African slaves was fundamental to growing colonial cash crops, which were exported to Europe. European goods, in turn, were used to purchase African slaves, who were then brought on the sea lane west from Africa to the Americas, the so-called Middle Passage.[2] 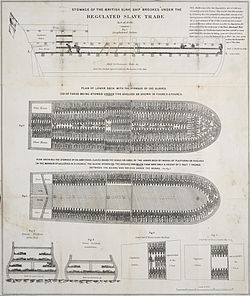 Diagram illustrating the stowage of African slaves on a British slave ship.

A classic example is the colonial molasses trade. Sugar (often in its liquid form, molasses) from the Caribbean was traded to Europe or New England, where it was distilled into rum. The profits from the sale of sugar were used to purchase manufactured goods, which were then shipped to West Africa, where they were bartered for slaves. The slaves were then brought back to the Caribbean to be sold to sugar planters. The profits from the sale of the slaves were then used to buy more sugar, which was shipped to Europe, restarting the cycle. The trip itself took five to twelve weeks. 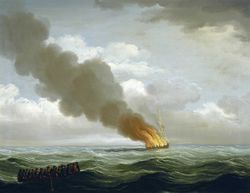 The loss of the slaver “Luxborough Galley” in 1727 (‘I.C. 1760’), lost in the last leg of the triangular trade, between the Caribbean and Britain.

The first leg of the triangle was from a European port to Africa, in which ships carried supplies for sale and trade, such as copper, cloth, trinkets, slave beads, guns and ammunition.[3] When the ship arrived, its cargo would be sold or bartered for slaves. On the second leg, ships made the journey of the Middle Passage from Africa to the New World. Many slaves died of disease in the crowded holds of the slave ships. Once the ship reached the New World, enslaved survivors were sold in the Caribbean or the American colonies. The ships were then prepared to get them thoroughly cleaned, drained, and loaded with export goods for a return voyage, the third leg, to their home port,[4] from the West Indies the main export cargoes were sugar, rum, and molasses; from Virginia, tobacco and hemp. The ship then returned to Europe to complete the triangle.

However, because of several disadvantages that slave ships faced compared to other trade ships, they often returned to their home port carrying whatever goods were readily available in the Americas and filled up a large part or all of their capacity with ballast. Other disadvantages include the different form of the ships (to carry as many humans as possible, but not ideal to carry a maximum amount of produce) and the variations in the duration of a slave voyage, making it practically impossible to pre-schedule appointments in the Americas, which meant that slave ships often arrived in the Americas out-of-season. Instead, the cash crops were transported mainly by a separate fleet which only sailed from Europe to the Americas and back. The Triangular trade is a trade model, not an exact description of the ship's route.[5]

New England also benefited from the trade, as many merchants from New England, especially the state of Rhode Island, replaced the role of Europe in the triangle. New England also made rum from the Caribbean sugar and molasses, which it shipped to Africa as well as within the New World.[6] Yet, the "triangle trade" as considered in relation to New England was a piecemeal operation. No New England traders are known to have completed a sequential circuit of the full triangle, which took a calendar year on average, according to historian Clifford Shipton.[7] The concept of the New England Triangular trade was first suggested, inconclusively, in an 1866 book by George H. Moore, was picked up in 1872 by historian George C. Mason, and reached full consideration from a lecture in 1887 by American businessman and historian William B. Weeden.[8] The song "Molasses to Rum" from the musical 1776 vividly describes this form of the triangular trade.

The term "triangular trade" also refers to a variety of other trades.