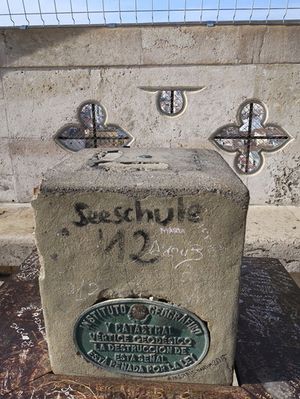 The station is usually set up by a government with known coordinate and elevation published. Many stations are located on hilltops for the purposes of visibility. A graven metal plate on the top of a pillar may provide a mounting point for a theodolite or reflector.

Trigonometrical stations are grouped together to form a network of triangulation. Positions of all land boundaries, roads, railways, bridges and other infrastructure can be accurately located by the network, a task that is essential to the construction of modern infrastructure. Apart from the known stations set up by government, some temporary trigonometrical stations are set up near construction sites for monitoring the precision and progress of construction.

Some trigonometrical stations use the Global Positioning System for greatly improved accuracy.

Although many stations are no longer required for surveying purposes, they remain useful to hikers as navigational aids.

A national geodetic survey and adjustment carried out in the early 1970s in Australia has left a legacy of trig stations consisting of a ground mark with a white quadripod supporting a black disc above the ground mark. These trig stations are clearly visible for many kilometres and useful for hikers.

Class 1 (一等三角点, ittō sankakuten?)
These are installed approximately every 40 kilometres (25 mi), with smaller ones (as necessary) about every 25 kilometres (16 mi).[2] There are about 1000 installed throughout Japan. The pillars are 18 centimetres (7.1 in) on a side, and each pillar is anchored with two very large perpendicular rocks buried underground.[3]

Class 2 (二等三角点, nitō sankakuten?)
This class of pillars are installed approximately every 8 kilometres (5.0 mi). There are about 5000 installed throughout Japan, and the pillars are 15 centimetres (5.9 in) on a side. Each pillar is anchored with a very large perpendicular rock buried underground.

Class 3 (三等三角点, santō sankakuten?)
There are about 32,000 installed throughout Japan, with one approximately every 4 kilometres (2.5 mi). The pillars are 15 centimetres (5.9 in) on a side, and each pillar is anchored with a large perpendicular rock buried underground.

Class 4 (四等三角点, yontō sankakuten?)
These are installed approximately every 2 kilometres (1.2 mi), and there are about 69,000 installed throughout Japan. The pillars are 12 centimetres (4.7 in) on a side, and each pillar is anchored with a large perpendicular rock buried underground.

Class 5 (五等三角点, gotō sankakuten?)
These markers were installed in 1899 and are the predecessors to the modern triangulation stations used in Japan today. They are generally not used anymore since the installation of the Class 1-4 stations. Some of them still exist at various locations throughout Japan.

In Spain there are 11000 triangulation stations, concrete buildings which typically consist of a cylinder 120 cm high and 30 cm diameter over a concrete cubic base.

They were erected by the Instituto Geográfico Nacional, usually painted in white, and can be marked with a metallic label with the warning: "The destruction of this sign is punishable by law". 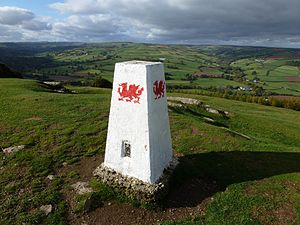 In the United Kingdom, trig points are typically concrete pillars, and were erected by the Ordnance Survey.

The process of placing trig points on top of prominent hills and mountains began in 1935 to assist in the accurate retriangulation of Great Britain. In low-lying or flat areas some trig points are only a few metres above sea level and one is even at -1 m (in Norfolk, TL6189). When all the trig points were in place, it was possible, in clear weather, to see at least two other trig points from any one trig point but subsequent vegetation growth means that this is not necessarily still the case. Careful measurements of the angles between the lines-of-sight of the other trig points then allowed the construction of a system of triangles which could then be referenced back to a single baseline to construct a highly accurate measurement system that covered the entire country.

In most of the United Kingdom, trig points are truncated square concrete (occasionally stone) pyramids or obelisks tapering towards the top. On the top a brass plate with three arms and a central depression is fixed and this is used to mount and centre a theodolite used to take angular measurements to neighbouring trig points. A benchmark is usually set on the side, marked with the letters "O S B M" (Ordnance Survey Bench Mark) and the reference number of the trig point. Within and below the visible trig point, there are concealed reference marks whose National Grid References are precisely known. The standard trig point design is credited to Brigadier Martin Hotine (1898–1968), the then head of the Trigonometrical and Levelling Division of the Ordnance Survey.[4] Many of them are now disappearing from the countryside as their function has largely been superseded by aerial photography and digital mapping using lasers and GPS measurements. To quote from a page at the OS site: "Like an iceberg, there is more of trig pillar below the surface than above it."[5] From the same source: "Today the receivers that make up the OS Net network are coordinated to an accuracy of just 3 mm over the entire length of Great Britain".