From Infogalactic: the planetary knowledge core
Jump to: navigation, search
For other uses, see Tribe (disambiguation).

A tribe is viewed, historically or developmentally, as a social group existing before the development of, or outside, states. A tribe is a distinct people, dependent on their land for their livelihood, who are largely self-sufficient, and not integrated into the national society. It is perhaps the term most readily understood and used by the general public. Stephen Corry, director of Survival International, the world's only organisation dedicated to indigenous rights, has defined tribal people as "those which have followed ways of life for many generations that are largely self-sufficient, and are clearly different from the mainstream and dominant society".[1] This definition, however, would not apply in countries in the Middle East such as Iraq, where the entire population is a member of one tribe or another and therefore tribalism itself is dominant and mainstream.

There are an estimated one hundred and fifty million tribal individuals worldwide,[2] constituting around forty percent of indigenous individuals. However, although nearly all tribal people are also indigenous, there are some who are not indigenous to the areas where they live now.

It is important to make the distinction between tribal and indigenous because tribal peoples have a special status acknowledged in international law as well as problems in addition to those faced by the wider category of indigenous peoples.

Many people used the term "tribal society" to refer to societies organized largely on the basis of social, especially familial, descent groups (see clan and kinship). A customary tribe in these terms is a face-to-face community, relatively bound by kinship relations, reciprocal exchange, and strong ties to place.[3]

"Tribe" is a contested term due to its roots in colonialism. The word has no shared referent, whether in political form, kinship relations or shared culture. Some argue that it conveys a negative connotation of a timeless unchanging past.[4][5][6] To avoid these implications, some have chosen to use the terms "ethnic group", or nation instead.[4][5][6]

In some places, such as North America and India, tribes are polities that have been granted legal recognition and limited autonomy by the state. 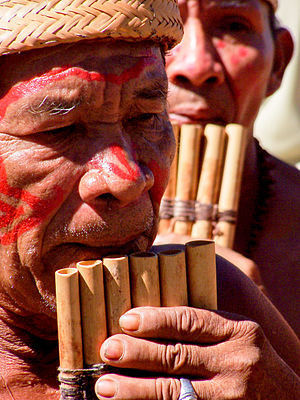 A shaman from a tribe in the Venezuelan Amazon playing a siku.

The English word tribe occurs in 12th-century Middle English literature as referring to one of the twelve tribes of Israel. The word is from Old French tribu, in turn from Latin tribus, referring to the original tripartite ethnic division of the Ancient Roman state: Ramnes (Ramnenses), Tities (Titienses), and Luceres, corresponding, according to Marcus Terentius Varro, to the Latins, Sabines, and Etruscans, respectively. The Ramnes were named after Romulus, leader of the Latins, Tities after Titus Tatius, leader of the Sabines, and Luceres after Lucumo, leader of an Etruscan army that had assisted the Latins. According to Livy, the three tribes were in fact squadrons of knights, rather than ethnic divisions. The term's ultimate etymology is uncertain, perhaps from the Proto-Indo-European roots tri- ("three") and bhew ("to be"). Gregory Nagy, in Greek Mythology and Poetics, says, citing the linguist Émile Benveniste in his Origines de la formation des noms en indo-européen, that the Umbrian "trifu" (tribus) is apparently derived from a combination of *tri- and *bhu-, where the second element is cognate with the 'phu-' of Greek phule, and that this subdivided the Greek polis into three phulai.

In 242–240 BC, the Tribal Assembly (comitia tributa) in the Roman Republic was organized in 35 tribes (four "urban tribes" and 31 "rural tribes"). The Latin word as used in the Bible translates as Greek phyle "race, tribe, clan" and ultimately the Hebrew or "sceptre". In the historical sense, "tribe", "race" and "clan" can be used interchangeably. 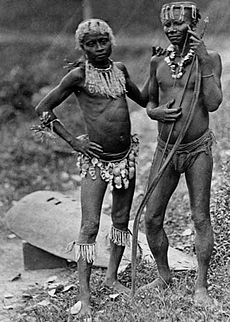 Considerable debate takes place over how best to characterize tribes. This partly stems from perceived differences between pre-state tribes and contemporary tribes; some reflects more general controversy over cultural evolution and colonialism. In the popular imagination, tribes reflect a way of life that predates, and is more natural than that in modern states. Tribes also privilege primordial social ties, are clearly bounded, homogeneous, parochial, and stable. Thus, it was believed[who?] that tribes organize links between families (including clans and lineages), and provide them with a social and ideological basis for solidarity that is in some way more limited than that of an "ethnic group" or of a "nation". Anthropological and ethnohistorical research has challenged all of these notions.

In his 1975 study, The Notion of the Tribe, anthropologist Morton H. Fried provided numerous examples of tribes the members of which spoke different languages and practiced different rituals, or that shared languages and rituals with members of other tribes. Similarly, he provided examples of tribes where people followed different political leaders, or followed the same leaders as members of other tribes. He concluded that tribes in general are characterized by fluid boundaries and heterogeneity, are not parochial, and are dynamic.[7] 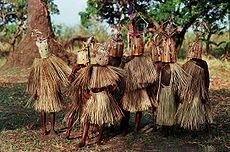 Initiation rituals among boys from a tribe in Malawi.

Fried, however, proposed that most contemporary tribes do not have their origin in pre-state tribes, but rather in pre-state bands. Such "secondary" tribes, he suggested, actually came about as modern products of state expansion. Bands comprise small, mobile, and fluid social formations with weak leadership, that do not generate surpluses, pay no taxes and support no standing army. Fried argued that secondary tribes develop in one of two ways. First, states could set them up as means to extend administrative and economic influence in their hinterland, where direct political control costs too much. States would encourage (or require) people on their frontiers to form more clearly bounded and centralized polities, because such polities could begin producing surpluses and taxes, and would have a leadership responsive to the needs of neighboring states (the so-called "scheduled" tribes of the United States or of British India provide good examples of this). Second, bands could form "secondary" tribes as a means to defend themselves against state expansion. Members of bands would form more clearly bounded and centralized polities, because such polities could begin producing surpluses that could support a standing army that could fight against states, and they would have a leadership that could co-ordinate economic production and military activities.

Archaeologists continue to explore the development of pre-state tribes. Current research suggests that tribal structures constituted one type of adaptation to situations providing plentiful yet unpredictable resources. Such structures proved flexible enough to coordinate production and distribution of food in times of scarcity, without limiting or constraining people during times of surplus.