From Infogalactic: the planetary knowledge core
Jump to: navigation, search
This article is about a lesser flow of water. For other uses, see Tributary (disambiguation). 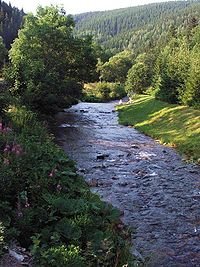 Biała Lądecka, a right tributary of Nysa Kłodzka in Poland, located in the village of Bielice in Lower Silesia.

A tributary[1] or affluent[2] is a stream or river that flows into a larger stream or river main stem (or parent) river or a lake.[3] A tributary does not flow directly into a sea or ocean. Tributaries and the main stem river serve to drain the surrounding drainage basin of its surface water and groundwater, leading the water out into an ocean.

A confluence, where two or more bodies of water meet together, usually refers to the joining of tributaries.

The opposite to a tributary is a distributary, a river or stream that branches off from and flows away from the main stream.[4] Distributaries are most often found in river deltas. 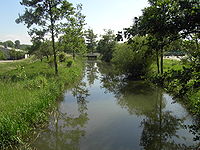 The Pfinz, a right tributary of the Rhine, located in Baden-Württemberg. 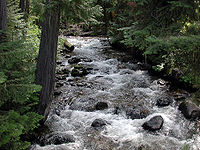 Walton Creek, a small tributary of the Lochsa River in northeastern Idaho, flowing slightly upstream of its confluence with a larger stream.

Where tributaries have the same name as the river into which they feed, they are called forks. These are typically designated by compass direction. For example, the American River receives flow from its North, Middle, and South forks. The Chicago River's North Branch has the East, West, and Middle Fork; the South Branch has its South Fork, and used to have a West Fork as well (now filled in).

Forks are sometimes designated as right or left. Here, the "handedness" is from the point of view of an observer facing upstream. For instance, Steer Creek has a left tributary which is called Right Fork Steer Creek.

Another method is to list tributaries from mouth to source, in the form of a tree structure, stored as a tree data structure.[citation needed]

In Norway, the river Glomma meets its main tributary Vorma.