From Infogalactic: the planetary knowledge core
Jump to: navigation, search
This article is about the political term. For the marketing phenomenon, see trickle-down effect.

"Trickle-down economics", also referred to as "trickle-down theory", is a populist political term used to characterize economic policies as favoring the wealthy or privileged. There is no "trickle down" economics as defined by economists, the term is almost exclusively used by critics of policies with other established names.[1] It is usually associated with criticism of laissez-faire capitalism in general and more specifically supply-side economics.

The term originated in United States politics.[2]:27-28 It has been attributed to humorist Will Rogers, who said during the Great Depression that "money was all appropriated for the top in hopes that it would trickle down to the needy."[3]

In recent history, the phrase is most closely identified with critics of the economic policies known as "Reaganomics". David Stockman, who as Reagan's budget director championed Reagan's tax cuts at first, but then became critical of them, told journalist William Greider that the "supply-side economics" is the trickle-down idea: "It's kind of hard to sell 'trickle down,' so the supply-side formula was the only way to get a tax policy that was really 'trickle down.' Supply-side is 'trickle-down' theory."[4][5] Political opponents of the Reagan administration soon seized on this language in an effort to brand the administration as caring only about the wealthy.[6]

Although the term "trickle down" is mainly political and does not denote a specific economic theory, some economic theories reflect the meaning of this pejorative. Some macro-economic models assume that a certain proportion of each dollar of income will be saved. This is called the marginal propensity to save. Many studies have found that the marginal propensity to save is considerably higher among wealthier people. However it is unclear whether the reasons are because of variation in accumulated wealth the consequence of choice (preferences and tastes) or chance.[7] Policies, including tax cuts, that seek to increase saving are often aimed at the wealthy for this reason.[8] All else equal, an exogenous rise in the amount of money saved results in some form of investment in a healthy economy, as it will increase the supply of deposits at banks will reduce the price of borrowing for both the corporate and the household sector, stimulating investment.

Economist Thomas Sowell has challenged the term's applicability, writing that the actual path of money in a private enterprise economy is quite the opposite of that claimed by people who refer to the trickle-down theory. He noted that money invested in new business ventures is first paid out to employees, suppliers, and contractors. Only some time later, if the business is profitable, does money return to the business owners—but in the absence of a profit motive, which is reduced in the aggregate by a raise in marginal tax rates in the upper tiers, this activity does not occur.[9][10] 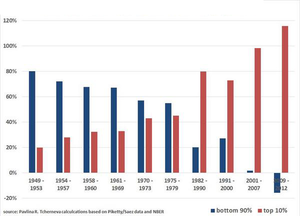 The economist John Kenneth Galbraith noted that "trickle-down economics" had been tried before in the United States in the 1890s under the name "horse and sparrow theory." He wrote, "Mr. David Stockman has said that supply-side economics was merely a cover for the trickle-down approach to economic policy—what an older and less elegant generation called the horse-and-sparrow theory: 'If you feed the horse enough oats, some will pass through to the road for the sparrows.'" Galbraith claimed that the horse and sparrow theory was partly to blame for the Panic of 1896.[15]

In New Zealand, Labour Party MP Damien O'Connor has, in the Labour Party campaign launch video for the 2011 general election, called trickle-down economics "the rich pissing on the poor".

A 2012 study by the Tax Justice Network indicates that wealth of the super-rich does not trickle down to improve the economy, but tends to be amassed and sheltered in tax havens with a negative effect on the tax bases of the home economy.[17]

University of Cambridge professor Ha-Joon Chang criticised the policies of trickle down in several publications, citing examples of: "slowing job growth in the last few decades, rising income inequality in most rich nations, and the inability provision in raising living standards across all income brackets rather than at the top only".[citation needed]

A 2015 report by the International Monetary Fund argues that there is no trickle-down effect as the rich get richer:

History and usage of the term

In 1896, Democratic Presidential candidate William Jennings Bryan made reference to trickle-down theory in his famous Cross of Gold speech:

After leaving the Presidency, Lyndon B. Johnson, a Democrat, alleged "Republicans [...] simply don't know how to manage the economy. They're so busy operating the trickle-down theory, giving the richest corporations the biggest break, that the whole thing goes to hell in a handbasket." [22]

Thomas Sowell has issued a challenge open to anyone to quote any economist "outside of an insane asylum" who had ever advocated the "trickle-down" theory.[24] Respondants referred him to David Stockman's remarks to William Greider. Sowell replied in his newspaper columns,[25] rejecting the article as an example because Stockman was merely citing "trickle-down" theory as existing. Stockman was using the term to criticize Reaganomics and explicitly labeling supply-side economics as "trickle-down".

Sowell wrote that Stockman "was not even among the first thousand people to make that claim" but that "not one of those who made the claim could provide a single quote from anybody who had advocated a 'trickle-down theory.'"[24]