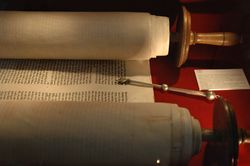 A Sefer Torah opened for liturgical use in a synagogue service.

The Triennial cycle of Torah reading may refer to the historical practice in ancient Israel by which the entire Torah was read in serial fashion over a three-year period, or to the practice adopted by many Reform, Conservative, Reconstructionist and Renewal congregations starting in the 19th and 20th Century, in which the traditional weekly Torah portions were divided into thirds, and in which one third of each weekly "parashah" of the annual system is read during the appropriate week of the calendar.

There are 54 parashot in the annual cycle, and 141, 154, or 167 parashot in the triennial cycle as practiced in ancient Israel, as evidenced by scriptural references and fragments of recovered text. By the Middle Ages, the annual reading cycle was predominant, although the triennial cycle was still extant at the time, as noted by Jewish figures of the period, such as Benjamin of Tudela and Maimonides. Dating from Maimonides' codification of the parashot in his work Mishneh Torah in the 12th Century CE through the 19th Century, the majority of Jewish communities adhered to the annual cycle.

In the 19th and 20th Centuries, many synagogues in the Reform, Conservative, Reconstructionist and Renewal Jewish movements adopted a triennial system in order to shorten the weekly services and allow additional time for sermons.[1]

The introduction of public reading of the Torah by Ezra the Scribe after the return of the Jewish people from the Babylonian Captivity is described in Nehemiah Chapter 8. Prior to Ezra, the mitzvah of Torah reading was based on the Biblical commandment of Hakhel (Deuteronomy 31:10–13), by which once every 7 years the entire people was to be gathered, "men, women and children,"[2] and hear much of Deuteronomy, the final volume of the Pentateuch, read to them (see the closing chapters of the Talmudic Tractate Sotah). Traditionally, the mitzvah of gathering the people and reading them the Torah under Hakhel was to be performed by the King. Under Ezra, Torah reading became more frequent and the congregation themselves substituted for the King's role. Ezra is traditionally credited with initiating the modern custom of reading thrice weekly in the synagogue. This reading is an obligation incumbent on the congregation, not an individual, and did not replace the Hakhel reading by the king. The reading of the Law in the synagogue can be traced to at least about the second century B.C., when the grandson of Sirach refers to it in his preface as an Egyptian practise; it must, therefore, have existed even earlier in Judea.

However, the annual reading cycle as practiced by the Jewish exile community in Babylonia was known by them to be different from the custom of the remaining Jews of Syria Palaestina. The Babylonian Talmud (Megillah 29b) "makes only one oblique reference to the triennial cycle: 'The people of the west (ie the Jews of eretz yisrael) who complete [the reading] (sic.) of the Torah in three years.'"[3]

In a systematic review of the history and religious basis of the ancient and modern triennial cycles undertaken on behalf of the Conservative movement, Lionel E. Moses cites Maimonides, who in Mishneh Torah observes "The widespread practice in all of Israel is to complete the Torah in one year. There are some who complete the Torah in three years, but this is not a widespread practice."[4]

According to the Jewish Encyclopedia, the triennial cycle "was the practise in Palestine, whereas in Babylonia the entire Pentateuch was read in the synagogue in the course of a single year,"[5] As late as 1170 Benjamin of Tudela mentioned Egyptian congregations that took three years to read the Torah[6]

In 1517 a Christian [7]Daniel Bomberg published the first Bible with rabbinic commentary, divided into 154 sedarim.[8]

Joseph Jacobs notes the transition from the triennial to the annual reading of the Law and the transference of the beginning of the cycle to the month of Tishri are attributed by Adolph Büchler to the influence of Abba Arika, also known as "Rab," or "Rav," (175–247 CE), a Jewish Talmudist who lived in Babylonia, and who established at Sura the systematic study of the rabbinic traditions, which, using the Mishnah as text, led to the compilation of the Talmud: "This may have been due to the smallness of the sedarim under the old system, and to the fact that people were thus reminded of the chief festivals only once in three years. It was then arranged that Deut. xxviii. should fall before the New-Year, and that the beginning of the cycle should come immediately after the Feast of Tabernacles. This arrangement has been retained by the Karaites and by modern congregations."

At the time of the Jewish Encyclopedia's publication (1901–1906), the author noted there were only "slight traces of the triennial cycle in the four special Sabbaths and in some of the passages read upon the festivals, which are frequently sections of the triennial cycle, and not of the annual one,"[9] however, throughout the 19th and 20th century, many Conservative, Reform, and other more recent Jewish movements like Reconstructionist and Renewal, adopted a triennial cycle distinct from the historical practice of ancient Israel, by dividing the annual sedarim into thirds and reading a third of each during the appropriate week of the year. (The ancient practice was to read each seder in serial order regardless of the week of the year, completing the entire Torah in three years in a linear fashion.) The current practice in Orthodox synagogues follows the annual/Babylonian cycle.

It has been suggested that the reading of the Law was due to a desire to controvert the views of the Samaritans with regard to the various festivals, for which reason arrangements were made to have the passages of the Pentateuch relating to those festivals read and expounded on the feast-days themselves.[citation needed]

This article incorporates text from the 1901–1906 Jewish Encyclopedia, a publication now in the public domain.