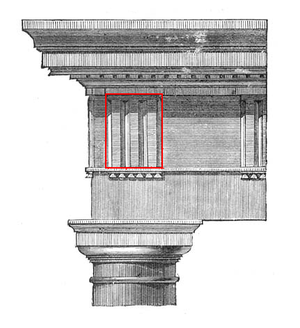 Triglyph is an architectural term for the vertically channeled tablets of the Doric frieze, so called because of the angular channels in them, two perfect and one divided, the two chamfered angles or hemiglyphs being reckoned as one. The rectangular recessed spaces between the triglyphs on a Doric frieze are called metopes. The raised spaces between the channels themselves (within a triglyph) are called femur in Latin or meros in Greek.[1]

The triglyph is largely thought to be a tectonic representation in stone of the wooden beam ends of the typical primitive hut, as described by Vitruvius and Renaissance writers. The wooden beams were notched in three separate places in order to cast their rough-cut ends mostly in shadow. Greek architecture (and later Roman architecture) preserved this feature, as well as many other features common in original wooden buildings, as a tribute to the origins of architecture and its role in the history and development of man.

In terms of structure, a triglyph may be carved from a single block with a metope, or the triglyph block may have slots cut into it to allow a separately cut metope (in stone or wood) to be slid into place, as at the Temple of Aphaea. There may be some variation in design within a single structure to allow for corner contraction, an adjustment of the column spacing and arrangement of the Doric frieze in a temple to make the design appear more harmonious.