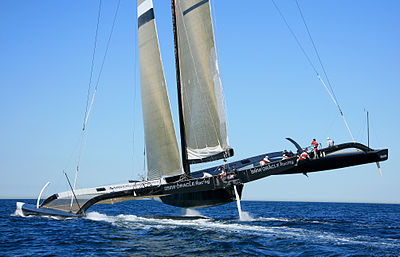 A trimaran is a multihull boat that comprises a main hull and two smaller outrigger hulls (or "floats") which are attached to the main hull with lateral beams. Trimarans are most commonly sail-driven yachts designed for recreation or racing, but there are a few trimaran ferries and warships.

The name "trimaran" is a 20th-century word concocted from "Tri" and "(Cata)maran".[1] It is thought to have been invented by Victor Tchetchet,[2] a pioneering, Ukrainian-born modern multihull designer.

The first trimarans were built by indigenous Polynesians and other Pacific islanders almost 4,000 years ago,[citation needed] and some of the current US terminology is derived from them. Sailing catamarans and trimarans gained popularity during the 1960s and 1970s.[3]

Amateur development of the modern sailing trimaran started in 1945 with the efforts of Victor Tchetchet, a Ukrainian émigré to the US, who built two trimarans made of marine plywood, which were about 24 feet long. He is credited with coining the term, "trimaran."[4] In the 1950s and 60s, Arthur Piver designed and built plywood kit trimarans, which were adopted by other home-builders, but were heavy and not sea-kindly by modern standards. Some of these achieved ocean crossings, nonetheless.[5] Other designers followed, including Jim Brown, Ed Horstman, John Marples, Jay Kantola, Chris White, Norman Cross and Richard Newick, thus bringing the trimaran cruiser to new levels of performance and safety.

Following the homebuilt movement, production models became available. Some trimarans in the 19–36-foot lengths (5.8–11.0 m) are designed as "day-sailers" which can be transported on a road trailer. These include the original Farrier - Corsair folding trimarans - and original John Westell swing-wing folding trimaran (using the same folding system later adopted also on Quorning Dragonfly) and like trimarans.[citation needed]

The trimaran concept has also been used for both passenger ferries and warships. For example, in 2005 the 127-metre trimaran (417 ft) Benchijigua Express was delivered by Austal to Spanish ferry operator Fred Olsen, S.A. for service in the Canary Islands. Capable of carrying 1,280 passengers and 340 cars, or equivalents, at speeds up to 40 knots, this boat was the longest aluminum ship in the world at the time of delivery.[6] A modern warship, the RV Triton was commissioned by British defence contractor QinetiQ in 2000. In October 2005, the United States Navy commissioned for evaluation the construction of a General Dynamics LCS trimaran designed and built by Austal.[7] The DARPA is experimenting with the trimaran design, and in 2012 awarded SAIC a contract to perform Phases 2 through 4 of the ACTUV Program. The contract is expected to be completed by August 2015.[8][9] 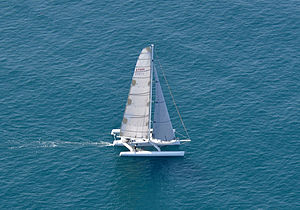 According to American usage, there are three terms that describe the main components of catamarans and trimarans, namely: “vaka”, “aka” and “ama”.[10] These terms come from the Malay and Polynesian language group terms for parts of the outrigger canoe

(The above terminologies reflects only American usage. In the UK the main hull of a trimaran is called simply the main hull or centre hull. The outrigger hulls are floats. The structures between the main hull and the floats are called the wings and the structural portions thereof are beams).

In comparison to outrigger canoes, trimarans typically feature a sail (or engine) and are not primarily designed to be paddled. Trimarans are typically significantly wider. In addition, trimaran floats are usually larger and more buoyant than those of outrigger canoes and typically contribute more considerably to drag which slows down the boat.[12]

Two types of trimaran exist: the regular trimaran and the open trimaran, which features a trampoline between the hulls instead of plating.

Trimarans have a number of advantages over comparable monohulls (conventional, single-hulled sailboats). Given two boats of the same length, the trimaran has a shallower draft, a wider beam, less wetted area, and is able to fly more sail area. In addition, because of the righting moment provided by the wide beam, trimarans do not need the weighted keel that is required in monohulls.. As a result of the wide beam, the trimaran offers much better straight-line performance than a monohull, is able to sail in shallower water, and maintains its stability in stronger winds. However, its wider beam requires more space to maneuver, so tacking and gybing can be trickier in confined areas. In the case of trimarans with open wings, the narrower hulls provide less living space than an equivalently sized monohull, but with solid wings the cabin accommodation can extend out over the wings providing a very roomy interior. Finally, trimarans require more docking space in marinas, unless the ama can be folded to reduce the beam.

As the righting moment (the force that resists the opposite torque of the wind on the sails) is produced by a float, or ama, rather than a heavy protruding keel, trimarans are lighter and faster than a monohull of equivalent length. A lightweight retractable keel or foil, referred to as a centerboard or daggerboard, is often employed to resist lateral movement, making many models easily beachable. Most trimarans are difficult to flip sideways given a reasonable degree of caution, however, trimarans can reach speeds so great in high winds that they can plow into the back of a wave and flip end-over-end (pitchpole). This hazard is especially dangerous for a multihull that is using a spinnaker in high winds and large seas. To avoid this unfortunate scenario trimaran sailors are advised to reduce sail and to always have all sails easily released. The use of trampolines with a large weave, to allow water to easily pass through, and the deployment of parachute anchors drogues and sea anchors whenever appropriate should reduce the risk to an acceptable degree.

Several manufacturers build trimarans in which the floats can be removed, repositioned, or folded near to the main hull. This allows them to be trailerable and/or to fit in a normal monohull space in a marina. At least six technologies are in use:

Although it is possible for a trimaran to capsize, this is less frequent than with monohull boats because of the greater resistance to rolling that the amas offer. Most trimaran designs are considered nearly unsinkable because even when filled with water, the flotation of one ama is enough to keep the entire vessel afloat. Because of their stability and safety, special trimarans such as the Challenger have become popular with sailors who have restricted mobility.

The greater speed compared to monohulls can also become important for safety when weather conditions are bad or threaten to deteriorate because the boat can leave the area of danger faster.

Trimarans designed for safety have amas with multiple sealed partitions, controls that all run to the cockpit, a collision bulkhead, partial or full cockpit coverings or windshields, and drain holes in the cockpit that can adequately drain the cockpit quickly, among other things.

Trimaran capsizes are more likely to be of the pitchpole type than a roll to one side due to their higher sideways stability and speeds. Capsized trimarans are harder to turn upright after they have turtled than monohull boats. While some capsized trimarans righted by sideways rotation may suffer heavy damage to mast and rigging, many modern[19] and ancient[20] trimarans are explicitly designed for this method of righting. Harnesses pulling on the stern toward the bow, or from the bow toward the stern of capsized trimarans have been shown[citation needed] to be able to successfully turn them end-over-end. Several design features reduce the chance of pitch-pole capsize; these include having wing nets with an open weave designed to reduce windage and decks and nets that shed water easily. The best way to avoid capsize is to reduce sail in heavy weather.[citation needed]

In their early days, trimarans were rather less robust than monohulls, and ran a greater risk of structural damage in heavy weather. Even today, ocean-going trimaran sailors remain wary of this risk.[citation needed]

Trimarans at anchor or on a mooring tend to follow the wind due to their light weight and shallow draft, whereas monohulls usually follow the tides.[citation needed] This can cause collisions if the trimaran is moored close to a monohull and their swing circles overlap. A correctly rigged bridle to the anchor line should reduce the swing to a minimum.

Competing with a giant trimaran the BMW Oracle Racing team representing the Golden Gate Yacht Club won the 2010 America's Cup on February 14, 2010, off Valencia, Spain, beating the giant catamaran Alinghi 2-0 in the best-of-three series and becoming the first American syndicate to win the cup since 1992. The large rigid wing sail of the USA 17 trimaran provided a decisive advantage and the trimaran won the America's Cup by a considerable margin in each race.

Francis Joyon holds the new world record for solo circumnavigation of the world, set on January 20, 2008. The 51-year-old Frenchman circled the planet alone in 57 days, 13 hours, 34 minutes, 6 seconds in a trimaran. He beat British sailor Ellen MacArthur's record set in February 2005 for which she spent just over 71 days at sea.

French Sailor Loïck Peyron holds the current record for fastest circumnavigation of the world in the trimaran Banque Populaire V. The crewed circumnavigation was completed in 45 days, 13 hours, 42 minutes, and 53 seconds.[citation needed]

Earthrace holds the current UIM (Union Internationale Motonautique) powerboat record for an equatorial circumnavigation via the Panama and Suez canals.[21]