From Infogalactic: the planetary knowledge core
Jump to: navigation, search
For other uses, see Tripe (disambiguation). 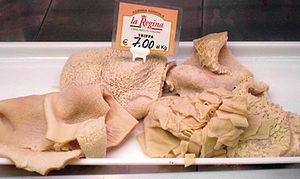 Tripe in an Italian market

Tripe (from French: tripe, of uncertain origin) is a type of edible offal from the stomachs of various farm animals.[1][2][3]

Beef tripe is usually made from the muscle wall (the interior mucosal lining is removed) of only the first three chambers of a cow's stomach: the rumen (blanket/flat/smooth tripe), the reticulum (honeycomb and pocket tripe), and the omasum (book/bible/leaf tripe). Abomasum (reed) tripe is seen much less frequently, owing to its glandular tissue content.

Though tripe tends to refer to the cow (beef) stomach cooked as food, a similar meal item may also be produced from any animal with a stomach. In some cases, other names have been applied to the 'tripe' of other animals. For example tripe from pigs may be referred to as paunch. Hog (pig) stomach is also eaten under the term, hog maw.

Washed tripe is more typically known as dressed tripe. To dress the tripe, the stomachs are cleaned and the fat trimmed off.[4] It is then boiled and bleached, giving it the white color more commonly associated with tripe as seen on market stalls and in butchers shops. The task of dressing the tripe is usually carried out by a professional tripe dresser.

Dressed tripe was a popular nutritious and cheap dish for the British working classes from Victorian times until the latter half of the 20th century.[5][6][7] While still popular in many parts of the world today, the number of tripe eaters, and consequently the number of tripe dressers, in the UK has rapidly declined. Tripe has come to be regarded as a pet food, as the increased affluence of postwar Britain has reduced the appeal of this once staple food.

It remains a popular dish in many parts of continental Europe such as France and Italy. In France, a very popular dish, sold in most supermarkets, is tripes à la mode de Caen. 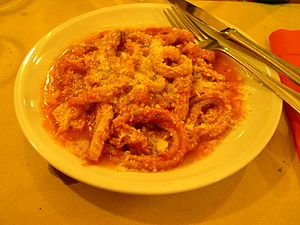 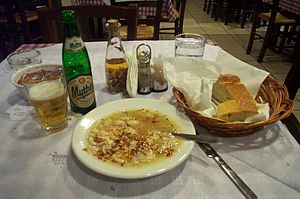 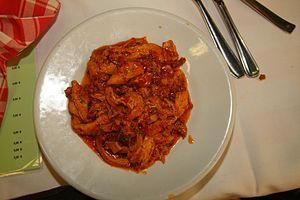 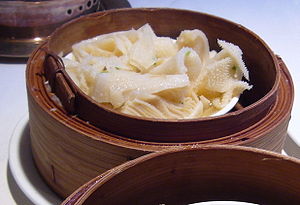 Tripe is eaten in many parts of the world. Tripe soup is made in many varieties in the Eastern European cuisine. Tripe dishes include:

In Spanish- and Portuguese-speaking countries, the close cognate "tripas" tends to denote small intestines rather than stomach lining. Dishes of this sort include: