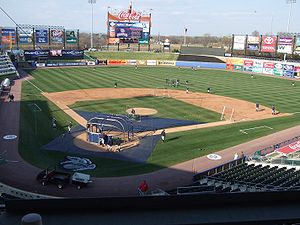 Coca-Cola Park in Allentown, Pennsylvania, home of the Lehigh Valley IronPigs, the Triple-A affiliate of the Philadelphia Phillies

Triple-A (officially Class AAA[1]) has been the highest level of play in Minor League Baseball in the United States since 1946. Currently, two leagues operate at the Triple-A level, the International League (IL) and the Pacific Coast League (PCL). There are 30 teams, one per each Major League Baseball (MLB) franchise, with 20 in the IL and 10 in the PCL. Triple-A teams are located in smaller cities as well as larger metropolitan areas without MLB teams, such as Austin, Jacksonville, Columbus, and Charlotte.

All current Triple-A teams are located in the United States; before 2008, some Triple-A leagues also fielded teams in Canada,[2] and from 1967 to 2020 the Mexican League was classified as Triple-A. Other than the current two Triple-A leagues, only three other leagues have ever held the classification.

Prior to 1946, the top level of Minor League Baseball was Double-A, which had been established in 1912.[3][4]:236 The Triple-A classification was created before the 1946 season, and began with all three leagues then in Double-A moving up to the new level:[4]:15

This structure persisted for the next 75 years with only a few changes:

The IL, PCL, and Mexican League continued as Triple-A leagues until Major League Baseball (MLB) reorganized the minor leagues prior to the 2021 season. At that time, the IL and PCL were temporarily renamed Triple-A East and Triple-A West, respectively. The Mexican League continues to operate, independently. Following MLB's acquisition of the rights to the names of the historical minor leagues, MLB announced on March 16, 2022, that the leagues would once again be called the International League and the Pacific Coast League, effective with the 2022 season.[6] 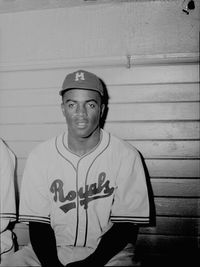 Jackie Robinson with the Triple-A Montreal Royals in July 1946

Triple-A teams' main purpose is to prepare players for the Major Leagues. ESPN wrote in 2010:[7]

Winning is nice, but secondary. It's much more important for a young prospect like outfielder Xavier Paul to get regular at-bats against lefties, or work on dropping down sacrifice bunts with a runner on first, than it is to take three of four from the Portland Beavers.[7]

Both young players and veterans play for Triple-A teams:

There are the young prospects speeding through the organization on the fastest treadmill, the guys who used to be young prospects who are in danger of topping out in Triple-A, the 30-somethings trying to get back to the majors after an injury or a rough patch, and the guys just playing a few more seasons because someone still wants them and they still want to.[7]

Most, if not all, of the players on an MLB team's expanded roster who are not currently on the team's active roster are assigned to the team's Triple-A club. Expanded rosters consist of 40 players, while active rosters generally consist of 26 players as of the 2021 season. Most Triple-A teams are near their MLB parent club, as activating a Triple-A player as an injury replacement is a common occurrence.

The term "AAAA player," pronounced "four-A" or "quadruple-A," refers to a player who succeeds when playing for Triple-A teams and who is not successful at the Major League level. The term is usually used derisively and has itself been criticized as flawed.[8][9] Major League team executives and managers disagree whether AAAA players exist.[10] 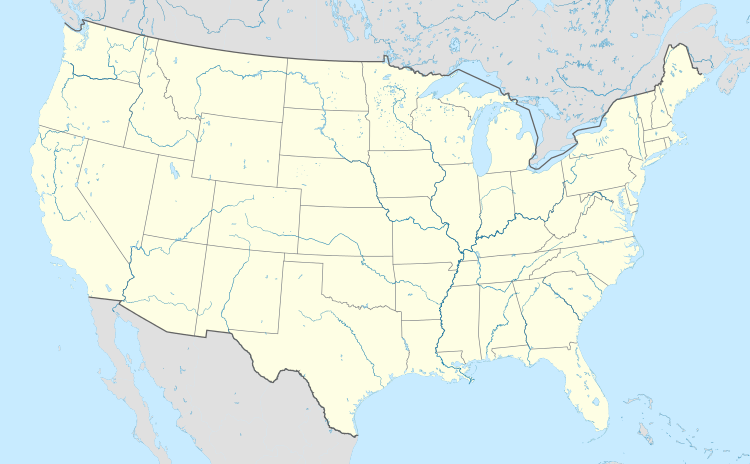 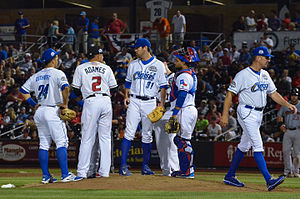 Traditionally, the game was held on the day after the mid-summer Major League Baseball All-Star Game.[12] Such games mark a symbolic halfway-point in the season, despite occurring later than the actual halfway-point of most seasons. Both Triple-A leagues shared a common All-Star break, with no regular-season games scheduled for two days before the All-Star Game itself. Some additional events, such as the All-Star Fan Fest and Triple-A Home Run Derby, were held each year during this break in the regular season.[13]

While the 2021 schedule originally included a three-day All-Star break of July 12–14,[14] this was removed after Opening Day was pushed back one month.[15] Team schedules for the 2021 season were subsequently issued without an All-Star break.[16]

Beginning in 2006, the annual Triple-A National Championship Game was held to serve as a single championship game between the champions of the International League and Pacific Coast League to determine an overall champion of Triple-A baseball. It was originally held annually at Chickasaw Bricktown Ballpark in Oklahoma City, and known as the Bricktown Showdown.[17] Starting in 2011, the game was held in a different Triple-A city each year.[18] Previous postseason interleague championships include the Junior World Series (1932–34, 1936–62, 1970–71, 1973–74), Triple-A World Series (1983, 1998–2000), and Triple-A Classic (1988–91).

For the 2021 season, in place of the National Championship Game, Minor League Baseball extended the Triple-A regular season to October 3,[19] with league champions determined based on regular-season records through the original end date of the season (September 19 for Triple-A East, and September 21 for Triple-A West).[20] The final 10 games of the season, played after those dates, were deemed the "Final Stretch", with the team posting the best winning percentage during that period (the Durham Bulls, who went 9–1) winning a cash prize.[20][21] It is uncertain when or if the National Championship Game will resume.

As a part of professional baseball's pace of play initiatives implemented in 2015, 20-second pitch clocks entered use at Triple-A stadiums in 2015.[22] In 2018, the time was shortened to 15 seconds when no runners are on base. Other significant changes implemented in 2018 included beginning extra innings with a runner on second base and limiting teams to six mound visits during a nine-inning game.[23] For the 2019 season, the number of mound visits was reduced to five, and pitchers were required to face a minimum of three consecutive batters unless the side is retired or the pitcher becomes injured and is unable to continue playing.[24]