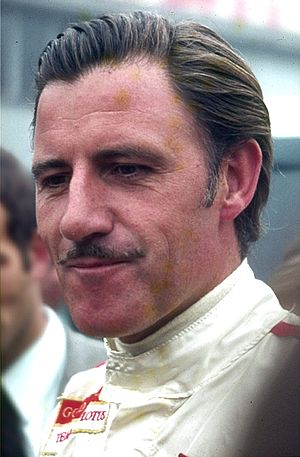 The Triple Crown of Motorsport is an unofficial motorsport achievement, often regarded as winning three of the most prestigious motor races in the world in one's career:[1][2][3][4]

For eleven years (1950 - 1960) Monaco and Indianapolis were part of the FIA World Championship of Drivers (now synonymous with Formula One) but in 1961 Indianapolis was dropped from the World Championship series.[5] In 1987 the Monaco race date was changed to be about two weeks later than earlier years. Since then both it and the Indianapolis race have been held on the same day making it impossible for one driver to compete in both races the same year.

An alternative definition replaces the Monaco Grand Prix with the Formula One World Championship; Graham Hill is also the only driver to have accomplished this, winning the F1 Drivers' Title in 1962 and 1968.[7][8][9]

Endurance sports car racing has its own Triple Crown which features Le Mans and has added the 24 Hours of Daytona and the 12 Hours of Sebring. This crown has been won by several drivers, namely A. J. Foyt, Hans Herrmann, Jackie Oliver, Jacky Ickx, Al Holbert, Hurley Haywood, Mauro Baldi, Andy Wallace, Marco Werner and Timo Bernhard. Many drivers have come close to winning the crown with 2nd-place finishes in the third event, such as Ken Miles (who was famously denied the win by a technicality at the 1966 24 Hours of Le Mans), Mario Andretti (Le Mans 1995) and Allan McNish (Daytona 2012).

From 1971–1980, Indy car racing contested their own Triple Crown, which consisted of the three 500-mile events on the calendar: the Indianapolis 500, Pocono 500, and California 500. Al Unser (1978) is the only driver to win all three in the same season. Ontario Motor Speedway was closed in 1980, and the California 500 replaced with the Michigan 500. The triple crown continued through 1989, after which the Pocono race was discontinued. No driver won all three events during the 1980s.

For 2014, Pocono returned to the 500-mile format, and Fontana was moved to the season ending race in August. Since the California 500's return under IndyCar sanction, it has been a night race.

In 2015, Fontana will move to July, while Pocono will be the penultimate race of the season in August. Of all variations of the IndyCar Triple Crown, only five drivers have achieved the feat over their career, with Al Unser the only one to achieve it in a single season.

Since 2005 an unofficial Triple Crown, formed of the three surviving legs of NASCAR's Grand Slam (the Daytona 500, Aaron's 499, and Coca-Cola 600) after the Ferko lawsuit took out the final leg (Darlington's Southern 500 in the autumn — not to be confused with the Rebel 500 in May) in favour of a second race at Texas Motor Speedway, has been established. No driver who made their first start in a NASCAR Sprint Cup race since 2005 has won more than one of the three jewels. So far, of active drivers, Kevin Harvick and Jimmie Johnson have won all three legs of the Triple Crown, but not all three in the same year.

The term is often used during the season in the National Hot Rod Association to refer to its three most prestigious races, the Winternationals, the U.S. Nationals, and the Finals. The Winternationals is the event that kicks off the NHRA season, held during the second weekend in February, the U.S. Nationals is often called "The oldest, richest, and most prestigious race in the NHRA," and carries the largest purse of any event on the schedule, and the Auto Club Finals at Pomona are held to mark the end of the NHRA season.

Both the Winternationals, and the Auto Club Finals are held on the same track, Auto Club Raceway at Pomona, while the U.S. Nationals has been held at O'Reilly Raceway Park in Indianapolis since 1961 (prior to that, the race was held on a now demolished track in Detroit). By far, the person with the most Triple Crown wins in his division is 15-time funny car champion John Force.

In Australia, a driver is said to have achieved the "Triple Crown" if they win the Sandown 500, the Bathurst 1000 and the International V8 Supercars Championship (formerly the Australian Touring Car Championship) in the same year.[11] Only two drivers have achieved this feat: Peter Brock in 1978 and 1980 and Craig Lowndes in 1996.

As of 2015[update], the only active drivers who have won two legs of the Triple Crown are Juan Pablo Montoya (currently racing in IndyCar) and Jacques Villeneuve. Villeneuve competed in the 2008 24 Hours of Le Mans where he finished in second place, a victory there would have allowed him to complete the Triple Crown (under the latter definition that includes the F1 Drivers' Championship, under the former definition of the Monaco GP his best finish was 4th in 2001).[12] Montoya also won the 24 Hours of Daytona three times and the CART series once.

The following table includes the alternative definition of winning the Indianapolis 500 plus the 24 Hours of Le Mans plus either of the Monaco Grand Prix or the Formula One World Drivers' Championship.

Key: Drivers who are still active are indicated in italics.