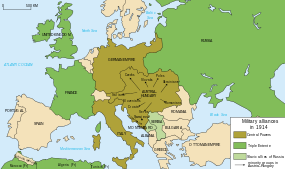 European military alliances prior to World War I

The Triple Entente (from French entente [ɑ̃tɑ̃t] "friendship, understanding, agreement") was the understanding linking the Russian Empire, the French Third Republic, and the United Kingdom of Great Britain and Ireland after the signing of the Anglo-Russian Entente on 31 August 1907. The understanding between the three powers, supplemented by agreements with Japan and Portugal, constituted a powerful counterweight to the Triple Alliance of Germany, Austria-Hungary and the Kingdom of Italy, though Italy did not follow through, and soon joined the allies.

Historians continue to debate the importance of the alliance system in igniting the Great War. At the start of World War I in 1914, all three of the Triple Entente entered it as Allies against the Central Powers Germany and Austria-Hungary.[1]

Russia had previously been a member of the League of the Three Emperors with Austria-Hungary and Germany, an alliance established in 1873 between Tsar Alexander II, Emperor Franz Joseph I and Kaiser Wilhelm I. The alliance was part of the German Chancellor Otto von Bismarck′s plan to isolate France diplomatically; he feared France had revanchist aspirations and might try to regain her 1871 losses,[2] and to fight against progressive sentiments the conservative rulers found unsettling, such as the First International.[3]

However, the League faced great difficulty with the growing tensions between the Russian Empire and Austria-Hungary. These tensions revolved mainly over the Balkans where, with the rise of nationalism and the continued decline of the Ottoman Empire, many former Ottoman provinces struggled for independence.[4]

The situation in the Balkans (especially in the wake of the Serbo-Bulgarian War) and the 1878 Treaty of Berlin, which left Russia feeling cheated of her gains made in the Russo-Turkish War led to the League not being renewed in 1887.[5]

In an attempt to stop Russia from allying with France, Bismarck signed the secret Reinsurance Treaty with Russia in 1887, assuring both parties would remain neutral toward each other should war break out.[6]

Despite the Reinsurance Treaty, the Russian leadership was alarmed at the country′s diplomatic isolation and entered the Franco-Russian Alliance in 1894.[7]

In 1904, Britain and France signed a series of agreements called the Entente cordiale. These agreements directly concerned colonies.

The Entente heralded the end of British neutrality in Europe. It was partly a response to growing German antagonism, as expressed in the expansion of the Kaiserliche Marine (Imperial Navy) into a battle fleet that could threaten the supremacy of the Royal Navy.

In 1907 Britain and Russia signed an agreement called the Anglo-Russian Convention of 1907. It stopped their rivalry in Central Asia (The Great Game).

In the last decade of the 19th century, Britain continued its policy of "splendid isolation", with its primary focus on defending its massive overseas empire. However, by the early 1900s the German threat increased dramatically. Some in Britain thought it was in need of allies. For most of the 19th century, Britain had regarded France and Russia as its two most dangerous rivals, but with the growing threat of Germany, British policy began to change.

The three main reasons were:

In 1907, the Anglo-Russian Entente was agreed, which attempted to resolve a series of long-running disputes over Persia, Afghanistan and Tibet, as well as helping to address British fears about German expansion in the Near East.

During the Franco-Prussian War of 1870–1871, Prussia defeated the Second French Empire, resulting in the establishment of the Third Republic. In the Treaty of Frankfurt, Prussia forced France to cede Alsace-Lorraine to the new German Empire. Ever since, relations had been at an all-time low. France—worried about the escalating military development of Germany—began building up its own war industries and army as a deterrent to German aggression. As another measure, France developed a strong bond with Russia by ratifying the Franco-Russian Alliance, which was designed to create a strong counter to the Triple Alliance. France′s main concerns were to protect against an attack from Germany, and to regain Alsace-Lorraine. 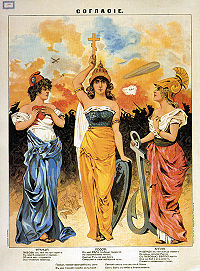 A 1914 Russian poster in which the upper inscription reads "agreement". The uncertain Britannia (right) and Marianne (left) look to the determined Mother Russia (centre) to lead them in the coming war.

Russia possessed, by far, the largest manpower reserves of all the six European powers, but was also the most backward economically. Russia shared France′s worries about Germany. After the Germans started to reorganize the Turkish army, Russia feared that they would come to control the Dardanelles, a vital trade artery which accounted for two fifths of Russia's exports.[8]

This was also coupled with Russia's long history of rivalry with Austria-Hungary. Austria-Hungary had recently annexed Bosnia and Herzegovina, angering Russia immensely. Russia had considered itself the leader of the Slavic world (Pan-Slavism) and viewed the invasion as another step towards annexing Serbia and Montenegro. To counteract Austria-Hungary′s aggression into the Balkans, Russia pledged to aid Serbia militarily if invaded.

Russia had also recently lost the humiliating Russo-Japanese War in 1905, resulting in a revolutionary uprising and apparent transformation into a constitutional monarchy. To counter its enemies militarily and politically, Russia sought to revive the Franco-Russian Alliance. Although it was perceived as useless during the war with Japan, in the European theatre it was invaluable. Russia signed the Anglo-Russian Convention of 1907 with Britain to counteract the threat of the Triple Alliance.

The alignment of the autocratic Russian Empire with Europe's two largest democracies was not without controversy on both sides. Many Russian conservatives mistrusted the secular French Republic, and recalled British diplomatic maneuvers to block Russian influence in the Near East; in turn, prominent French and British journalists, academics, and parliamentarians found the reactionary tsarist regime distasteful. The mistrust persisted even during wartime, with British and French politicians expressing relief when Tsar Nicholas II abdicated in favor of a Provisional Government in 1917. An initial offer of political asylum for the Romanovs was subsequently withdrawn by the British government due to fears of a public backlash; for the same reason, the French Republic never broached the subject of asylum with the deposed tsar.