Although known as a horse conch, this is not a true conch, as it is not in the family Strombidae.

This species is the largest gastropod in the American waters,[3] and one of the largest univalves in the world.

The animal can retract the soft parts entirely into the shell and close it with the operculum. The soft parts are bright orange in color. 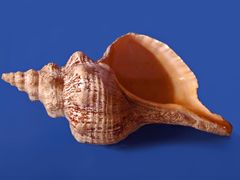 The outline of the shell is somewhat fusiform, with a long siphonal canal, and having up to 10[3] whorls. Its sculpture present several spiral cords and axial ribs, some of which can form knobs on the whorls' shoulders.[3]

The shell color is bright orange in very young individuals. The shell often becomes greyish white to salmon-orange when adult, with a light tan or dark brown periostracum.[3]

This large sea snail is found along the Atlantic coast of the Americas from the U.S. state of North Carolina to the north, to Yucatán in the Gulf of Mexico to the south.[3] 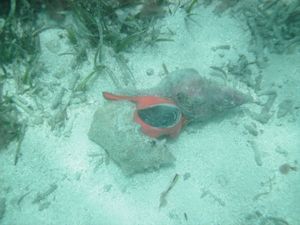 This species dwells on sand, weed and mud flats from the low intertidal to shallow subtidal zones,[3] in 20 foot (6 m) deep water.

Triplofusus giganteus is a carnivorous predatory species, and feeds on other large marine gastropods, including the tulip shell (Fasciolaria tuplipa), the lightning whelk (Busycon perversum), and the queen conch (Eustrombus gigas) as well as some Murex species.[4][5] It may also present cannibalistic behaviour, feeding on smaller conspecific individuals.[4] It has been observed (in an aquarium setting) to eat small hermit crabs of the species Clibanarius vittatus.

The U.S. state of Florida declared it the state seashell in 1969. The shell is popular with shell collectors partly because of its great size.

In classic Mayan art, the Horse Conch is shown being utilised in many ways including as paint and ink holders for elite scribes, and also as a bugle or trumpet.

In southern Florida, Native Americans, including the Calusa and Tequesta, used the horse conch to make several types of artifact. The whole shell, or more commonly only the columella, was attached to a wooden handle and used as a hammer or woodworking tool. The body whorl was used as a drinking cup. The columella was also used to make plummets or sinkers.