From Infogalactic: the planetary knowledge core
Jump to: navigation, search
This article is about a three-legged piece of equipment. For other uses, see Tripod (disambiguation). 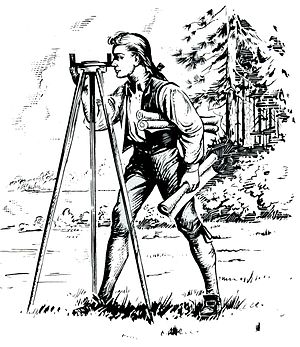 A tripod is a portable three-legged frame, used as a platform for supporting the weight and maintaining the stability of some other object. A tripod provides stability against downward forces and horizontal forces and movements about horizontal axes. The positioning of the three legs away from the vertical centre allows the tripod better leverage for resisting lateral forces.

First attested in English in the early 17th century, the word tripod comes via Latin tripodis (GEN of tripus),[1][2] which is the romanization of Greek τρίπους (tripous), "three-footed" (GEN τρίποδος, tripodos),[3] ultimately from τρι- (tri-), "three times"[4] (from τρία, tria, "three")[5] + πούς (pous), "foot".[6] The earliest attested form of the word is the Mycenaean Greek 𐀴𐀪𐀠, ti-ri-po, written in Linear B syllabic script.[7] 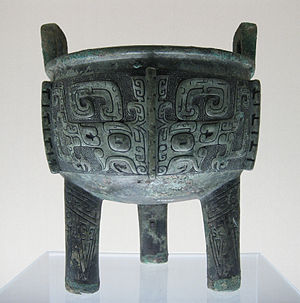 A ding from late Xia Dynasty.

Many cultures, including the ancient peoples of China and Greece, used tripods as ornaments, trophies, sacrificial altars, cooking vessels or cauldrons, and decorative ceramic pottery. Tripod pottery have been part of the archaeological assemblage in China since the earliest Neolithic cultures of Cishan and Peiligang in the 7th and 8th millennium BC.[8] Sacrificial tripods were found in use in ancient China usually cast in bronze but sometimes appearing in ceramic form.[9] They are often referred to as "dings" and usually have three legs, but in some usages have four legs.

The Chinese use sacrificial tripods symbolically in modern times, such as in 2005, when a "National Unity Tripod" made of bronze was presented by the central Chinese government to the government of northwest China's Xinjiang Uygur Autonomous Region to mark its fiftieth birthday. It was described as a traditional Chinese sacrificial vessel symbolizing unity.[10]

In ancient Greece, tripods were frequently used to support lebes, or cauldrons, sometimes for cooking and other uses such as supporting vases. 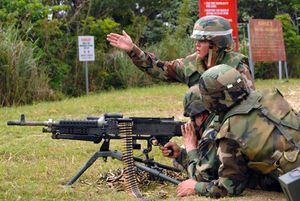 On firearms, tripods are commonly used on machine guns to provide a forward rest and to reduce motion from recoil. Machine guns are capable of firing long continuous bursts of fire, but at the cost of increased recoil (which decreases accuracy), and increased weight (machine guns are heavier in order to absorb the stresses of prolonged fully automatic fire). The tripod permits the operator to rest the weapon on the ground and thus the gun feels lighter to the shooter and accuracy is increased.

Tripods are generally restricted to heavier weapons where the weight would be an encumbrance. For lighter weapons such as rifles, a bipod is more common. 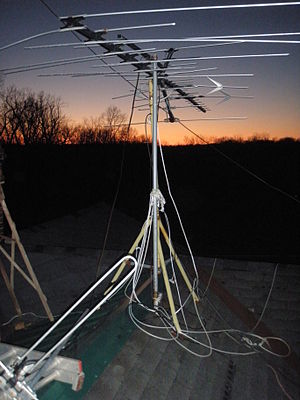 A tripod used to support a rooftop television antenna

Tripods are used for both motion and still photography to prevent camera movement and provide stability. They are especially necessary when slow-speed exposures are being made, or when telephoto lenses are used, as any camera movement while the shutter is open will produce a blurred image. In the same vein, they reduce camera shake, and thus are instrumental in achieving maximum sharpness. A tripod is also helpful in achieving precise framing of the image, or when more than one image is being made of the same scene, for example when bracketing the exposure. Use of a tripod may also allow for a more thoughtful approach to photography. For all of the aforementioned reasons, a tripod of some sort is often necessary for professional photography. In relation to film/video, use of the tripod offers stability within a shot as well as certain desired heights. The use of a tripod within film/video is often a creative choice of the Director, although it is generally used. 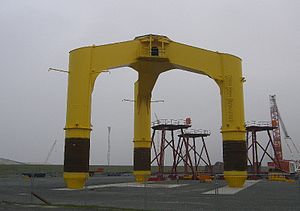 For maximum strength and stability, as well as for easy levelling, most photographic tripods are braced around collapsible telescopic legs, with a center post that moves up and down. To further allow extension, the center post can usually extend above the meeting of three legs. At the top of the tripod is the head, which includes the camera mount (usually a detachable plate with a thumbscrew to hold the camera). The head connects to the frame by several joints, allowing the camera to pan, tilt and roll. The head usually attaches to a lever so that adjustments to the orientation can be performed more delicately. Some tripods also feature integrated remote controls for a camera, though these are usually proprietary to the company that manufactured the camera.

A surveyor's tripod is a device used to support any one of a number of surveying instruments, such as theodolites, total stations, levels or transits.

The tripod is placed in the location where it is needed. The surveyor will press down on the legs' platforms to securely anchor the legs in soil or to force the feet to a low position on uneven, pock-marked pavement. Leg lengths are adjusted to bring the tripod head to a convenient height and make it roughly level.

Positioning the tripod and instrument precisely over an indicated mark on the ground or benchmark requires techniques that are beyond the scope of this article.

Many modern tripods are constructed of aluminum, though wood is still used for legs. The feet are either aluminum tipped with a steel point or steel. The mounting screw is often brass or brass and plastic. The mounting screw is hollow to allow the optical plumb to be viewed through the screw. The top is typically threaded with a 5/8" x 11 tpi screw thread. The mounting screw is held to the underside of the tripod head by a movable arm. This permits the screw to be moved anywhere within the head's opening. The legs are attached to the head with adjustable screws that are usually kept tight enough to allow the legs to be moved with a bit of resistance. The legs are two part, with the lower part capable of telescoping to adjust the length of the leg to suit the terrain. Aluminum or steel slip joints with a tightening screw are at the bottom of the upper leg to hold the bottom part in place and fix the length. A shoulder strap is often affixed to the tripod to allow for ease of carrying the equipment over areas to be surveyed.