From Infogalactic: the planetary knowledge core
Jump to: navigation, search
For other uses, see Tripoli (disambiguation).

Tripoli (Greek: Τρίπολη, Trípoli, formerly Τρίπολις, Trípolis; earlier Τριπολιτσά Tripolitsa) is a city in the central part of the Peloponnese, in Greece. It is the capital of the Peloponnese region as well as of the regional unit of Arcadia. The homonym municipality has around 47,000 inhabitants.

In the Middle Ages the place was known as Drobolitsa, Droboltsá, or Dorboglitza, either from the Greek Hydropolitsa, 'Water City' or perhaps from the South Slavic for 'Plain of Oaks'.[2][3] The association made by 18th- and 19th-century scholars with the idea of the "three cities" (Τρίπολις, τρεις πόλεις "three cities": variously Callia, Dipoena and Nonacris, mentioned by Pausanias without geographical context,[4] or Tegea, Mantineia and Pallantium, or Mouchli, Tegea and Mantineia[5] or Nestani, Mouchli and Thana), were considered paretymologies by G.C. Miles.[6] An Italian geographical atlas of 1687[7] notes the fort of Goriza e Mandi et Dorbogliza; a subsequent Italian geographical dictionary of 1827 attributes the name Dorbogliza to the ruins of Mantineia (Mandi) and states that it is located north of Tripolizza.[8]

The Ottoman Turks referred to the town and the district as Tripoliçe. 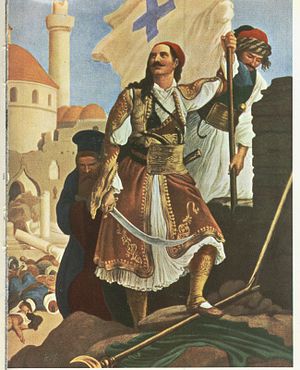 In spring 1770 during a Greek uprising known as Orlov Revolt, the revolutionary armies were halted out of Tripolitsa. As a retaliation of the Greek uprising Albanian mercenaries of the Ottomans slaughtered 3,000 Greeks in a few hours upon entering the city. Total massacre and destruction of the city was avoided after intervention of Osman bey, leader of the Albanian mercenaries.[9]

Before the Greek War of Independence, under the Ottoman name of "Tripoliçe", it was one of the Ottoman administrative centers in the Peloponnese (the Morea Eyalet, often called "pashalik of Tripolitsa") and had large Muslim and Jewish populations. Tripolis was one of the main targets of the Greek insurgents in the Greek War of Independence, who stormed it on 17 October 1821, following the bloody Siege of Tripolitsa, and exterminated the Muslim and Jewish populations in revenge.[10][11]

Ibrahim Pasha retook the city on June 22, 1825, after it had been abandoned by the Greeks. Before he evacuated the Peloponnese in early 1828, he destroyed the city and tore down its walls.[12]

After the independent Greek state was established in 1830, Tripoli was rebuilt and was developed as one of the main cities of the Kingdom of Greece, serving as the capital of the Arcadia district. During the 19th and the 20th centuries the city emerged to be the administrative, economic, commercial and transportation center of central and south Peloponnese.[13]

Tripolis is in the center of the Peloponnese, in a broad montane basin at about 650 m in altitude. Tripolis is surrounded by thickly wooded mountains on all sides, the tallest and closest of which is Mount Mainalon to the northwest. The southwest of the Tripolis basin formerly consisted of wetlands which have now been drained and converted to farmland. Because of its inland location and high altitude, Tripolis has a transitional mediterranean/continental climate with hot dry summers and cold winters. Summer temperatures can exceed 40C/104F (Record max. 44C/112F) and in winter temperatures below −10C/14F have been observed (Record min. -18C/0F). Snow can occur several times between late October and early April.

Its main plazas are aligned with the main street and with a highway linking to Pyrgos and Patras. One of them is named Kennedy, the other is named Georgiou B' (George II). The southern part has its main street named Washington. The main section of the city is enclosed around the castle walls that were built during the Ottoman occupation of Greece. An industrial park has been built in the southwest. 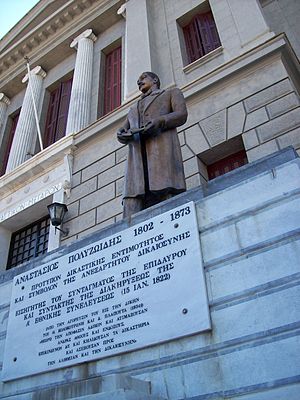 Close-up view of the statue of Anastasios Polyzoidis in front of the Court House.

The municipality of Tripoli was formed at the 2011 local government reform by merging these 8 former municipalities, that became municipal units:[15]

The municipal unit of Tripoli is subdivided into these communities:

Tripoli is the seat of the recently founded University of the Peloponnese with two departments of the Sciences and Technology School and one department of the Economics and Administration School. 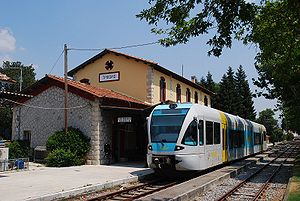 Tripoli is mainly accessed from Athens and the rest of Greece through the Corinth-Tripoli-Kalamata motorway, known as the Moreas Motorway (A7). An alternative route is the GR-7 which used to be the main highway to Tripoli before the construction of the motorway. The city is also accessed by GR-74 and GR-76 from Pyrgos and by GR-39 from Sparta.

Tripoli is served by the metre gauge railway line from Corinth to Kalamata of the Hellenic Railways Organisation (OSE). The line was renovated and passenger services to Árgos and Corinth, which had been suspended for a few years, were reinstated in 2009. However, in December 2010 services ceased again due to the general suspension of railway services in the Peloponnese.

Tripoli hosts three sport clubs with presence in the higher national divisions in Greek football and basketball. These clubs are shown below.

Tripoli, Greece is twinned with: