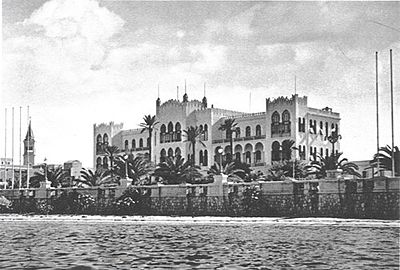 The Grand Hotel of Italian Tripoli, built in the early 1930s

Tripoli was the capital of Italian Libya in the first half of the XX century. It was called Tripoli italiana in Italian language and the inhabitants were called Tripolini. Italian Tripoli [1] was under Italian control from 1911 until January 1943: officially it disappeared in 1947 after the Peace Treaty following WWII.

During the Italo-Turkish War of 1911 Tripoli was conquered by the Italian Kingdom. The Italian fleet appeared off Ottoman Tripoli in the evening of September 28, 1911: the city was quickly conquered by 1,500 Italian sailors, welcomed by the population [2]

By the 1912 treaty signed in Ouchy, Italian sovereignty was acknowledged by the Ottomans, although the local Caliph was permitted to exercise religious authority. Italy officially granted autonomy after the war, but gradually occupied the region of Tripolitania. Originally administered as part of a single colony, Tripoli and its surrounding province were a separate colony from 26 June 1927 to 3 December 1934, when all Italian possessions in North Africa were merged into one colony called "Italian Libya".

Since 1937 the governor Italo Balbo started a policy of immigration of Italians (mainly farmers) who were called the Ventimilli and some of them settled in the area of Italian Tripoli.[3] So, by the end of 1937, the city has 108,240 inhabitants, including 39,096 Italians. At the start of WWII Italian Tripoli had 111,124 inhabitants of which the Italians were 41,304: 37% of the city's inhabitants. Additionally there were nearly 18,000 Jews in the Tripoli area. Indeed after the Italian occupation of Libya in 1911, the Jews made great strides in education and economic conditions: at that time, there were about 21,000 Jews in the country, the majority in Tripoli. In the late 1930s, Fascist anti-Jewish laws were gradually enforced, and Jews were subject to moderate repression: still, by 1941 -due even to the partial rejection of those laws by governor Italo Balbo- the Jews accounted for a fifth of the population of Tripoli and maintained 44 synagogues.

In 1941 and 1942 Italian Tripoli -according to estimates of the Italian government- reached a temporary population of nearly 150,000 inhabitants, due to the arrival of many Italians from Benghazi and Cyrenaica who took refuge from the British army attacks during WWII. As a consequence Tripoli was in those years -for the first time since the Arab conquest in 643 AD- a city mostly Christian.