From Infogalactic: the planetary knowledge core
Jump to: navigation, search
This article is about shapes with three-fold rotational symmtery. For other uses, see Triskelion (disambiguation). 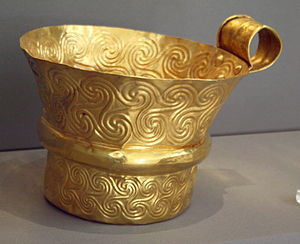 Gold cup from Mycenae decorated with triskelions, in the National Archaeological Museum of Athens. 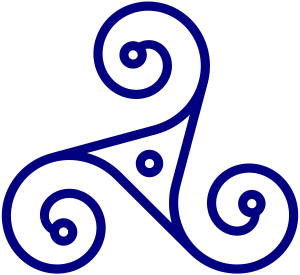 Triskele of the Amfreville Gaulish helmet.

A triskelion or triskele (which invariably has rotational symmetry) is a motif consisting of three interlocked spirals, three bent human legs, or three bent/curved lines extending from the center of the symbol. Both words are from Greek "τρισκέλιον" (triskelion) or "τρισκελής" (triskeles), "three-legged",[1] from prefix "τρι-" (tri-), "three times"[2] + "σκέλος" (skelos), "leg".[3] A triskelion is the symbol of Sicily, where it is called trinacria,[4] as well as of the Isle of Man,[5] Brittany, and the town of Füssen in Germany.

Neolithic, Bronze Age, and Iron Age use in Europe 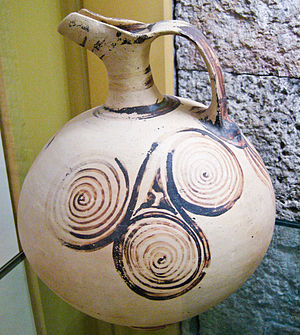 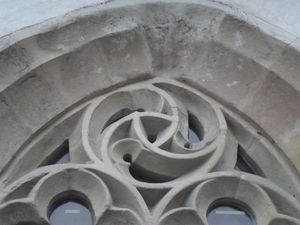 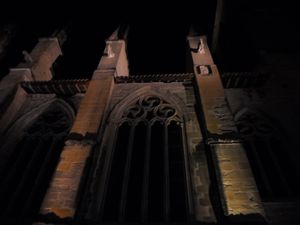 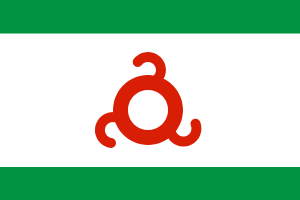 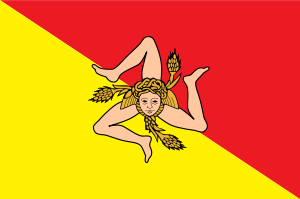 The flag of Sicily, featuring the triskelion symbol and the Gorgon 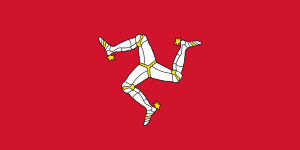 The flag of the Isle of Man, is composed solely of a triskele against a red background

The triskelion symbol appears in many early cultures, the first in Malta (4400–3600 BC) and in the astronomical calendar at the famous megalithic tomb of Newgrange in Ireland built around 3200 BC,[6] Mycenaean vessels, on coinage in Lycia, and on staters of Pamphylia (at Aspendos, 370–333 BC) and Pisidia. It appears as a heraldic emblem on warriors' shields depicted on Greek pottery.[7]

The triskelion is an ancient symbol of Sicily, with the head of the Gorgon, whose hair are snakes, from which radiate three legs bent at the knee. The symbol dates back to when Sicily was part of Magna Graecia, the colonial extension of Greece beyond the Aegean.[8] Pliny the Elder attributes the origin of the triskelion of Sicily to the triangular form of the island, the ancient Trinacria (from the Greek tri- (three) and akra (end, limb)), which consists of three large capes equidistant from each other, pointing in their respective directions, the names of which were Pelorus, Pachynus, and Lilybæum.[citation needed]

The Celtic symbol of three conjoined spirals may have had triple significance similar to the imagery that lies behind the triskelion. The triple spiral motif is a Neolithic symbol in Western Europe. Though popularly considered a "Celtic" symbol it is in fact a pre-Celtic symbol.[9] It is carved into the rock of a stone lozenge near the main entrance of the prehistoric Newgrange monument in County Meath, Ireland. Newgrange, which was built around 3200 BC,[6] predates the Celtic arrival in Ireland, but has long since been incorporated into Celtic culture. The symbol is also found carved in rock in Castro Culture settlement in Portugal, Galicia and Asturias in northwest Spain.[citation needed]

Traditional Asian versions of the triskelion include the Japanese Mitsudomoe, the Tibetan Buddhist Gankyil, and the Korean Sam Taegeuk.

A triskelion is featured on the seal of the United States Department of Transportation.

A triskelion shape is the basis for the roundel of the Irish Air Corps,[10] and the logo for the Trisquel Linux distribution.

A triskelion shape was used in the design of RCA's "Spider" 45 rpm adapter, a popular plastic adapter for vinyl records, which allows larger center-holed 45 rpm records (commonly used on 7" singles and EPs) to spin on players designed for smaller center-holed 33-1/3 rpm records (the standard for 10" and 12" LPs). The design was practical, the three curved arms providing equal spring and thus keeping the hole centred. The iconic design of the Spider has led to its adoption as a popular symbol for record and music enthusiasts.[11][12]

The crest of the Breton football club En Avant de Guingamp combines the Flag of Brittany, the team colours and the triple spiral triskelion.

The triskele, usually consisting of spirals, but also the "horned triskelion", is used by some polytheistic reconstructionist and neopagan groups. As a Celtic symbol, it is used primarily by groups with a Celtic cultural orientation and, less frequently, can also be found in use by various eclectic or syncretic traditions such as Neopaganism. The spiral triskele is one of the primary symbols of Celtic Reconstructionist Paganism.[14] Celtic Reconstructionists use the symbol to represent a variety of triplicities in their cosmology and theology; it is also a favored symbol due to its association with the god Manannán mac Lir.[14]

The endocytic protein, clathrin, is triskelion-shaped.