A triumvirate (from Latin, triumvirātus, from trēs three + vir man) is a political regime dominated by three powerful individuals, each a triumvir (pl. triumvirs or triumviri). The arrangement can be formal or informal, and though the three are usually equal on paper, in reality this is rarely the case. The term can also be used to describe a state with three different military leaders who all claim to be the sole leader.

Originally, triumviri were special commissions of three men appointed for specific administrative tasks apart from the regular duties of Roman magistrates. The triumviri capitales, for instance, oversaw prisons and executions, along with other functions that, as Andrew Lintott notes, show them to have been "a mixture of police superintendents and justices of the peace."[1] The capitales were first established around 290–287 BCE.[2] They were supervised by the praetor urbanus. These triumviri, or the tresviri nocturni,[3] may also have taken some responsibility for fire control.[4]

Three-man commissions were also appointed for purposes such as establishing colonies (triumviri coloniae deducendae) or distributing land.[5] Triumviri mensarii served as public bankers;[6] the full range of their financial functions in 216 BCE, when the commission included two men of consular rank, has been the subject of debate.[7] Another form of three-man commission was the tresviri epulones, who were in charge of organizing public feasts on holidays. This commission was created in 196 BCE by a tribunician law on behalf of the people, and their number was later increased to seven (septemviri epulones).[8]

In the late Republic, two three-man political alliances are called triumvirates by modern scholars, though only for the second was the term triumviri used at the time to evoke constitutional precedents:

In various municipalities under the Principate, the chief magistracy was a college of three, styled triumviri.

In the Bible triumvirates occurred at some notable events in both the Old Testament and New Testament. In the Book of Exodus Moses, his brother Aaron and, according to some views their nephew or brother-in-law, Hur acted this way during Battle of Rephidim against the Amalekites.[Exodus 17:10][11] In the Gospels as a leading trio among the Twelve apostles at three particular occasions during public ministry of Jesus acted Peter, James, son of Zebedee and his brother John. They were the only apostles present at the Raising of Jairus' daughter[Mark 5:37], Transfiguration of Jesus [Matthew 17:1] and Agony in the Garden of Gethsemane[Matthew 26:37]. Later, at the time of the Early Christian Church this triumvirate of the leading apostles changed slightly, as it became composed of Peter, John and James, brother of Jesus.[Galatians 2:9][12]

Despite the Three Excellencies—including the Chancellor, Imperial Secretary, and irregularly the Grand Commandant—representing the most senior ministerial positions of state, this triumvirate was supported by the economic technocrat and Imperial Secretary Sang Hongyang (d. 80 BCE), their political lackey. The acting Chancellor Tian Qianqiu was also easily swayed by the decisions of the triumvirate.[13]

The Three Excellencies existed in Western Han (202 BCE – 9 CE) as the Chancellor, Imperial Secretary, and Grand Commandant, but the Chancellor was viewed as senior to the Imperial Secretary while the post of Grand Commandant was vacant for most of the dynasty. After Emperor Guangwu established the Eastern Han (25–220 CE), the Grand Commandant was made a permanent official while the Minister over the Masses replaced the Chancellor and the Minister of Works replaced the Imperial Secretary. Unlike the three high officials in Western Han when the Chancellor was senior to all, these new three senior officials had equal censorial and advisory powers. When a young or weak-minded emperor ascended to the throne, these Three Excellencies could dominate the affairs of state. There were also other types of triumvirates during the Eastern Han; for example, at the onset of the reign of Emperor Ling of Han (r. 168–189), the General-in-Chief Dou Wu (d. 168), the Grand Tutor Chen Fan (d. 168), and another prominent statesman Hu Guang (91–172) formed a triumvirate nominally in charge of the Privy Secretariat, when in fact it was a regent triumvirate that was overseeing the affairs of state and Emperor Ling.[14]

In Hindu mythology, the gods Brahma, Vishnu and Shiva form the triumvirate Trimurti "in which the cosmic functions of creation, maintenance, and destruction are personified" respectively by those gods.."[15]

Tamil Triumvirate refers to the triumvirate of Chola, Chera, and Pandya who dominated the politics of the ancient Tamil country.

The title was revived a few times for (short-lived) three-headed political 'magistratures' in post-feudal times.

While French Huguenots had derisively bestowed the name Triumvirate on the alliance formed in 1561 between Catholic Francis, Duke of Guise, Anne de Montmorency, and Jacques Dalbon, Seigneur de Saint Andre during the French Wars of Religion, in later years the term would be used to describe other arrangements within France.

At the end of the 1700s, when the French revolutionaries turned to several Roman Magistrature names for their new institutions, the three-headed collective Head of State was named Consulat, a term in use for two-headed magistratures since Antiquity; furthermore it included a "First Consul" who was not an equal, but the de facto solo head of state and government – a position Napoleon Bonaparte chose to convert openly into the First French Empire.

Prior to Napoleon and during the Terror Robespierre, Louis de Saint-Just, and Couthon, as members of the governing Committee of Public Safety, were purported by some to have formed an unofficial triumvirate. Although officially all members of the committee shared equal power the three men's friendship and close ideological base led their detractors to declaim them as triumvirs which was used against them in the coup of 9 Thermidor. 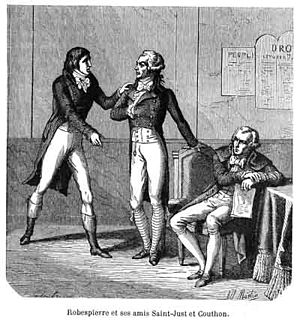 In the early days of the national struggle and before Gandhi, the Indian National Congress was known to be under Lal-Bal-Pal i.e. Lala Lajpat Rai, Bipin Chandra Pal and the leader of the three Balgangadhar Tilak often dubbed Lokmanya Tilak.

Mao Zedong, Zhou Enlai, and Zhu De had the biggest contribution to the foundation of the People's Republic of China in 1949 and are regarded as the most influenced members of the first generation of the Chinese communist leaders. All of them died during 1976.[19]

See also List of Troikas in the Soviet Union 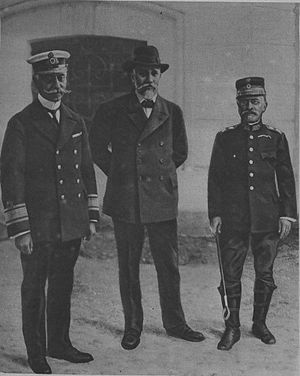 After the Lisbon Treaty came into force from 1 December 2009:

Eric Schmidt, CEO of Google has referred to himself, along with founders Larry Page and Sergey Brin as part of a triumvirate, stating, "This triumvirate has made an informal deal to stick together for at least 20 years".[22]

The word has been used as a term of convenience, though not an official title, for other groups of three in a similar position: