From Infogalactic: the planetary knowledge core
Jump to: navigation, search
This article is about the mythological Trojan Horse. For other uses, see Trojan horse (disambiguation). 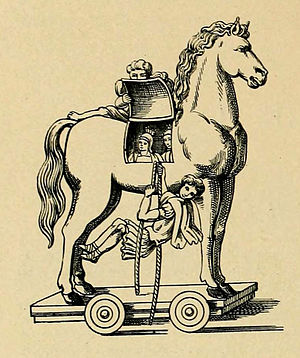 Trojan horse after the Vergilius Vaticanus. 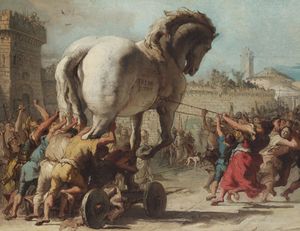 Detail from The Procession of the Trojan Horse in Troy by Domenico Tiepolo (1773), inspired by Virgil's Aeneid

The Trojan Horse is a tale from the Trojan War about the subterfuge that the Greeks used to enter the city of Troy and win the war. In the canonical version, after a fruitless 10-year siege, the Greeks constructed a huge wooden horse, and hid a select force of men inside. The Greeks pretended to sail away, and the Trojans pulled the horse into their city as a victory trophy. That night the Greek force crept out of the horse and opened the gates for the rest of the Greek army, which had sailed back under cover of night. The Greeks entered and destroyed the city of Troy, decisively ending the war.

Metaphorically a "Trojan Horse" has come to mean any trick or stratagem that causes a target to invite a foe into a securely protected bastion or place. A malicious computer program which tricks users into willingly running it is also called a "Trojan horse".

The main ancient source for the story is the Aeneid of Virgil, a Latin epic poem from the time of Augustus. The event is referred to in Homer's Odyssey. In the Greek tradition, the horse is called the "Wooden Horse" (Δούρειος Ἵππος, Doúreios Híppos, in the Homeric Ionic dialect). 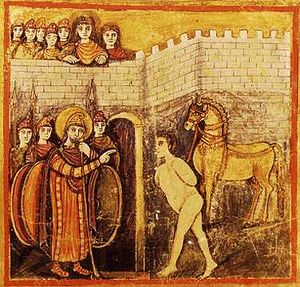 Sinon is brought to Priam, from folio 101r of the Roman Vergil

According to Quintus Smyrnaeus, Odysseus thought of building a great wooden horse (the horse being the emblem of Troy), hiding an elite force inside, and fooling the Trojans into wheeling the horse into the city as a trophy. Under the leadership of Epeios, the Greeks built the wooden horse in three days. Odysseus' plan called for one man to remain outside the horse; he would act as though the Greeks had abandoned him, leaving the horse as a gift for the Trojans. An inscription was engraved on the horse reading: "For their return home, the Greeks dedicate this offering to Athena". Then they burned their tents and left to Tenedos by night. Greek soldier Sinon was "abandoned", and was to signal to the Greeks by lighting a beacon.[1] In Virgil's poem, Sinon, the only volunteer for the role, successfully convinces the Trojans that he has been left behind and that the Greeks are gone. Sinon tells the Trojans that the Horse is an offering to the goddess Athena, meant to atone for the previous desecration of her temple at Troy by the Greeks, and ensure a safe journey home for the Greek fleet. Sinon tells the Trojans that the Horse was built to be too large for them to take it into their city and gain the favor of Athena for themselves.

While questioning Sinon, the Trojan priest Laocoön guesses the plot and warns the Trojans, in Virgil's famous line Timeo Danaos et dona ferentes ("I fear Greeks, even those bearing gifts"),[2] Danai (acc Danaos) or Danaans (Homer's name for the Greeks) being the ones who had built the Trojan Horse. However, the god Poseidon sends two sea serpents to strangle him and his sons Antiphantes and Thymbraeus before any Trojan heeds his warning. According to Apollodorus the two serpents were sent by Apollo, whom Laocoon had insulted by sleeping with his wife in front of the "divine image".[3] In the Odyssey, Homer says that Helen of Troy also guesses the plot and tries to trick and uncover the Greek soldiers inside the horse by imitating the voices of their wives, and Anticlus attempts to answer, but Odysseus shuts his mouth with his hand.[4] King Priam's daughter Cassandra, the soothsayer of Troy, insists that the horse will be the downfall of the city and its royal family. She too is ignored, hence their doom and loss of the war.[5]

This incident is mentioned in the Odyssey:

What a thing was this, too, which that mighty man wrought and endured in the carven horse, wherein all we chiefs of the Argives were sitting, bearing to the Trojans death and fate! 4.271 ff
But come now, change thy theme, and sing of the building of the horse of wood, which Epeius made with Athena's help, the horse which once Odysseus led up into the citadel as a thing of guile, when he had filled it with the men who sacked Ilion . 8.487 ff (trans. Samuel Butler)

The most detailed and most familiar version is in Virgil's Aeneid, Book II [6] (trans. A. S. Kline).

After many years have slipped by, the leaders of the Greeks,
opposed by the Fates, and damaged by the war,
build a horse of mountainous size, through Pallas's divine art,
and weave planks of fir over its ribs:
they pretend it's a votive offering: this rumour spreads.
They secretly hide a picked body of men, chosen by lot,
there, in the dark body, filling the belly and the huge
cavernous insides with armed warriors. [...]
Then Laocoön rushes down eagerly from the heights
of the citadel, to confront them all, a large crowd with him,
and shouts from far off: "O unhappy citizens, what madness?
Do you think the enemy's sailed away? Or do you think
any Greek gift's free of treachery? Is that Ulysses's reputation?
Either there are Greeks in hiding, concealed by the wood,
or it's been built as a machine to use against our walls,
or spy on our homes, or fall on the city from above,
or it hides some other trick: Trojans, don't trust this horse.
Whatever it is, I'm afraid of Greeks even those bearing gifts."

Well before Virgil, the story is also alluded to in Greek classical literature. In Euripides' play Trojan Women, written in 415 BC, the god Poseidon proclaims: "For, from his home beneath Parnassus, Phocian Epeus, aided by the craft of Pallas, framed a horse to bear within its womb an armed host, and sent it within the battlements, fraught with death; whence in days to come men shall tell of 'the wooden horse,' with its hidden load of warriors."[7]

Men in the horse

Thirty soldiers hid in the Trojan horse's belly and two spies in its mouth. Other sources give different numbers: The Bibliotheca 50;[8] Tzetzes 23;[9] and Quintus Smyrnaeus gives the names of 30, but says there were more.[10] In late tradition the number was standardized at 40. Their names follow:[11] 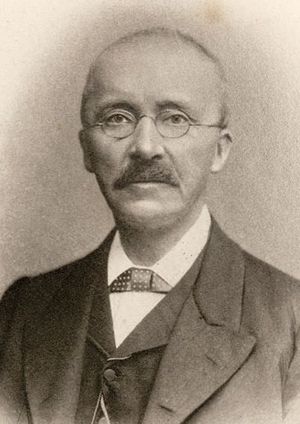 There has been speculation that the Trojan Horse may have been a battering ram resembling, to some extent, a horse, and that the description of the use of this device was then transformed into a myth by later oral historians who were not present at the battle and were unaware of that meaning of the name. Assyrians at the time used siege machines with animal names, often covered with dampened horse hides to protect against flaming arrows; it is possible that the Trojan Horse was such.[12] Pausanias, who lived in the 2nd century AD, wrote in his book Description of Greece "That the work of Epeius was a contrivance to make a breach in the Trojan wall is known to everybody who does not attribute utter silliness to the Phrygians"[13] where, by Phrygians, he means the Trojans.

Some authors have suggested that the gift was not a horse with warriors hiding inside, but a boat carrying a peace envoy,[14] and it has also been noted that the terms used to put men in the horse are those used when describing the embarkation of men on a ship.[15] 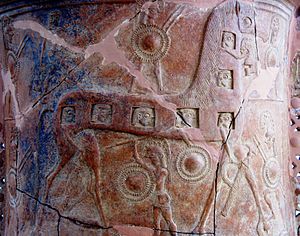 The Mykonos vase, with one of the earliest known renditions of the Trojan Horse. (Note the depiction of the faces of hidden warriors shown on the horse's side.)

There are three known surviving classical depictions of the Trojan Horse. The earliest is on a fibula brooch dated about 700 BC. The other two are on relief pithos vases from the adjoining Grecian islands Mykonos and Tinos, both usually dated between 675 and 650 BC, the one from Mykonos being known as the Mykonos Vase.[16][17] Historian Michael Wood, however, dates the Mykonos Vase to the 8th century BC, some 500 years after the supposed time of the war, but before the written accounts attributed by tradition to Homer. Wood concludes from that evidence that the story of the Trojan Horse was in existence prior to the writing of those accounts.[18]