From Infogalactic: the planetary knowledge core
(Redirected from Trophy of Augustus)
Jump to: navigation, search 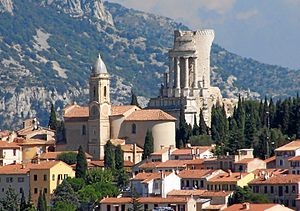 The Trophy of Augustus, with the church of St Michel (left middle ground)

The Tropaeum Alpium (Latin for "Victory Monument of the Alps", French: Trophée des Alpes), was built by the Romans for the emperor Augustus to celebrate his definitive victory over the ancient tribes who populated the Alps. The monument's remains are in the commune of La Turbie (France), a few kilometers from the Principality of Monaco (Latin: tropaeum from Greek: tropaion whence English: "trophy").

The Trophy was built c. 6 BC in honor of the emperor Augustus to celebrate his definitive victory over the 45 ancient tribes who populated the Alps. The Alpine populations were defeated during the military campaign to subdue the Alps conducted by the Romans between 16 and 7 BC.

The stone used to build the monument was originally extracted from the Roman quarry located about 500 metres away. Visitors to that site can still see the traces of sections of carved columns in the stone.[citation needed]

The monument as partially restored by archaeologists at the beginning of the 20th century, is 35 meters high. When built, according to the architect, the base measured 35 meters in length, the first platform 12 meters in height, and the rotunda of 24 columns with its statue of an enthroned Augustus is 49 metres high.[citation needed]

One of the stones of the tower, which Pliny the Elder transcribed,[1] contained the names of the tribes. It reads:

The monument originally served no military purpose and contained no fortress. Rather, it marked the boundary between Italy and Gallia Narbonensis, later pushed back to the Var. Between the 12th and 15th centuries, however, the Trophy did become a fortress, with locals building houses around its walls. In 1705, when war broke out between Savoy and France during the War of the Spanish Succession, Louis XIV ordered the destruction of all fortresses in the region, including this one. The partially destroyed Trophy then became a quarry and its stones were used, among other things, to build the nearby church of Saint-Michel.[citation needed]

The area surrounding the Trophy is rich with remnants of the Roman empire such as the famous Roman roads. The Trophy is situated on the Via Julia Augusta, named after the emperor Augustus, which is a continuation of the Via Aurelia which linked Vintimille to Cimiez (Nice). Various fountains within the territory of the communes of Beausoleil and Roquebrune-Cap-Martin are also said to be Roman.[citation needed]