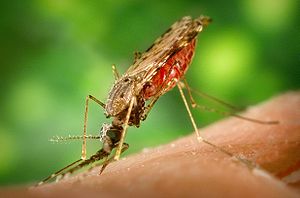 Tropical medicine (also sometimes called International medicine) is the branch of medicine that deals with health problems that occur uniquely, are more widespread, or prove more difficult to control in tropical and subtropical regions.

Many infections and infestations that are classified as "tropical diseases" used to be endemic in countries located in the tropics. This includes widespread epidemics such as malaria, Ebola and hookworm infections as well as exceedingly rare diseases like lagochilascaris minor. Many of these diseases have been controlled or even eliminated from developed countries, as a result of improvements in housing, diet, sanitation, and personal hygiene.

The training in Tropical Medicine is quite different between countries. Most physicians are trained at Institutes of Tropical Medicine. For example, the training of Dutch tropical doctors consists of two clinical years (Obstetrics & Gynecology, Paediatrics or General Surgery) and a three months course at the Royal Tropical Institute (KIT) in Amsterdam.

Recently, the government of Bangladesh established the Institute of Tropical and Infectious Diseases in the port city of Chittagong.