Troy VII, in the mound at Hisarlik, is an archaeological layer of Troy that chronologically spans from ca. 1300 to ca. 950 BC. It coincides with the collapse of the Bronze Age. It was a walled city with fortified towers reaching a height of 9 metres (30 ft); the foundations of one of its towers measured 18 metres by 18 metres (59 ft). Manfred Korfmann, who excavated the site in the 1980s, estimated the area of Troy VII at 200,000 square metres (50 acres) or more and put its population at five to ten thousand inhabitants, which makes it "by the standards of its day a large and important city".[1]

The city was built following the destruction of Troy VIh,[2] probably by an earthquake ca. 1300 BC. A number of layers are distinguished:

Troy VII was contemporary with the late period of Mycenaean culture and the Greek Dark Ages, as well as with the late Hittite Empire to Neo-Hittite times.

The city of the archaeological layer known as Troy VIIa, which has been dated on the basis of pottery styles to the mid- to late-13th century BC, lasted for about a century, with a destruction layer at ca. 1190 BC. It is the most often-cited candidate for the Troy of Homer and is believed to correspond to Wilusa, known from Hittite sources dating to the period of roughly 1300–1250 BC.

These dates correspond closely to the mythical chronology of Greece as calculated by classical authors, placing the construction of the walls of Troy by Poseidon, Apollo and Aeacus at 1282 BC and the sack of Troy by the Greeks at 1183 BC.

Troy VIIa appears to have been destroyed by a war, perhaps the source of the legendary Trojan War, and there are traces of a fire. Partial human remains were found in houses and in the streets, and near the north-western ramparts a human skeleton with skull injuries and a broken jawbone. Three bronze arrowheads were found, two in the fort and one in the city. However, only small portions of the city have been excavated, and the finds are too scarce to clearly favour destruction by war over a natural disaster.

Until excavations in 1988, one of the problems with this identification was that Troy VII seemed to be a hill-top fort, and not a city of the size described by Homer. The 1988 discovery of a small section of a possible city circuit wall enclosing a much larger area suggests a city "at least ten times larger than earlier excavators — and thus the broader public — had supposed".[1] 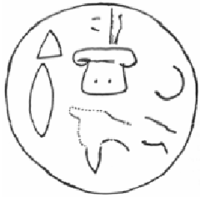 The site remained inhabited following the destruction of Troy VIIa. Troy VIIb dates to a time when Greek influence began to extend to the area (the "Greek Dark Ages"). Troy VIIb1 (ca. 1120 BC) and Troy VIIb2 (ca. 1020 BC) appear to have been destroyed by fires. Troy VIIb3 was deserted in the mid-10th century BC, and the site remained uninhabited for more than 200 years before a new settlement, Troy VIII, was established around 700 BC. The site was again uninhabited throughout Classical Antiquity, until the foundation of Roman Ilium at the site (Troy IX) in the 20s BC.

It was first excavated by Western Europeans in the second half of the 19th century; first by the Englishman Frank Calvert and afterwards by the German businessman and treasure hunter Heinrich Schliemann, who is generally credited with its recovery. As early as 1822, Hisarlik was identified by Charles Maclaren as a possible site of Homeric Troy.[3] In 1847, his brother Frederick bought a farm of over 2,000 acres (8 km²) at Akca Koy, including part of Mount Hisarlik.