Trump International Hotel and Tower, Toronto is a mixed-use skyscraper in Toronto, Ontario, Canada. It was built by Talon International Development Inc., which is owned by Val Levitan and Canadian businessman Alex Shnaider.

It is named for real estate developer Donald Trump, a minority shareholder in the project. The tower is located in the Financial District, at 311 Bay Street, on the southeast corner of Bay and Adelaide. Construction began with the removal of the sales centre in September 2007, but the official groundbreaking was Friday, October 12, 2007. The planned completion date for the hotel portion of the tower was fall 2011, with the official completion of the tower projected to be in early 2012. The building topped out in early September 2011, and the spire was raised on September 24, 2011. Trump tower is the second tallest skyscraper in Canada (including spire), the tallest mixed use building in the city and fourth tallest structure in the city. The hotel opened for business on January 31, 2012, and its grand opening occurred on April 16, 2012.[2] Work on the top of the building continued until completion in July 2012 with the activation of two high intensity aircraft warning lights. 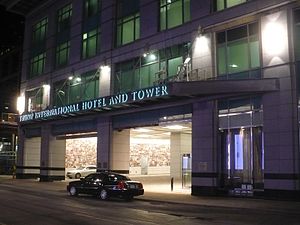 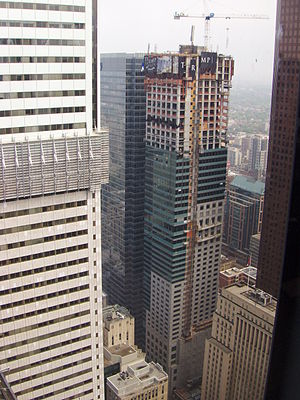 The 65-storey (57 occupiable floors) Trump International Hotel & Tower is 276.9 m (908 ft) tall[3] and is clad with a steel, glass, and stone facade. The building includes 260 luxury hotel rooms and 109 condominiums. The top two floors of the hotel section house a 5,486 m2 (59,050 sq ft) spa. It was built by Zeidler Roberts Partnership and is the tallest residential building in Canada. Floors 2-31 occupies the hotel while 32-57 occupies residential.

Residential suites start at 207 m2 (2,230 sq ft) and have been designed with upscale fixtures and 3.4 to 4 m (11 to 13 ft) ceilings. Condo prices start at C$1.2 million. There are 4-6 suites per floor. Residents have a separate entrance and elevators from hotel guests.

Builders planned to connect the building to Toronto's underground PATH network, however this plan was dropped due to the high costs associated with tunnelling under the city.[4]

Lewis Builds Corporation, a construction and development manager in downtown Toronto was the construction manager for this project.

The building is built from a vacant lot (parking) surrounded by Scotia Plaza and The National Club.

Developer Harry Stinson intended to create a friendly rivalry between himself and Trump for the tallest residential building in Canada with the Sapphire Tower. As a result, the initial heights of both projects were revised several times in an attempt to outdo each other, and Stinson's skyscraper would have been 17 metres taller in its last design. However, the Sapphire Tower failed to gain approval of city council and its development company filed for bankruptcy in 2007.[5] At that time, the Trump Tower's design was also scaled back and the height was reduced because of the real estate market slowdown.[citation needed]

The tower has been controversial since its opening because of lower than expected occupancy rates in the "hotel-condo" portion of the building that led to a legal battle between real estate investors and Talon International Development. Investors wanted to opt out of purchase agreements because they believe the sales tactics used by Talon regarding financial projections were misleading. The Ontario Securities Commission investigated the matter in 2012 and decided not to take action.[6] Talon is counter-suing the investors who did not pay the remaining purchase price by December 13, 2012.[7]

Josh Matlow, Toronto City Councilman for Ward 22, created a petition to rename the building following Donald Trump's remarks during his bid for the Republican Party presidential nomination on banning Muslims from entering the United States.[8]

As of August 2013[update] the building was not complete, close to six years after the start of construction: with the "TRUMP" sign on the north side of the tower read "TRUM", and the public art feature Lightline was missing. The tower's spokesman, Dorenda McNeil, told media in May 2013 that "from our perspective, the building is not yet fully complete. We will turn it [the public art feature] on at the right opportunity". Because the light feature is a public art piece promised as part of the approval process for development, the City of Toronto is growing impatient and is considering commencing litigation.[9]